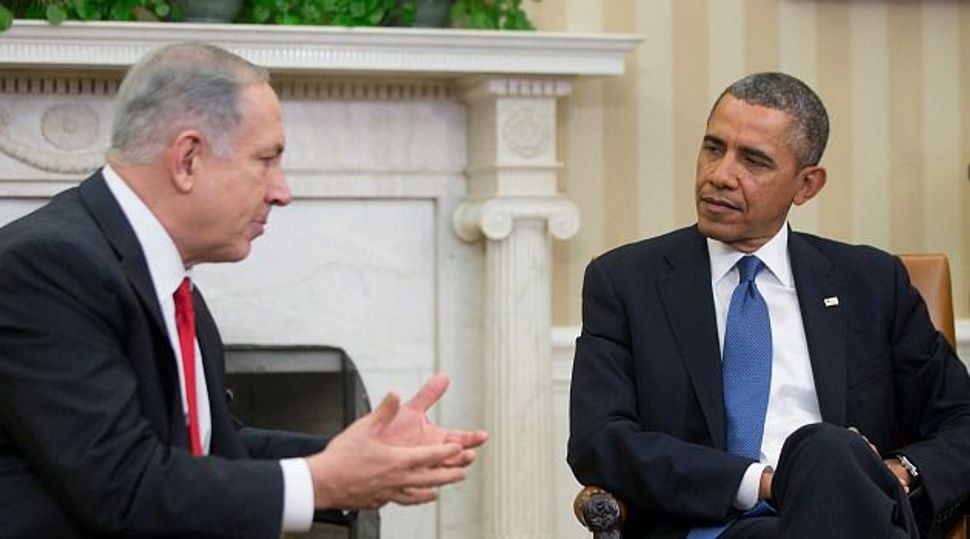 Open disagreement with Israel on some of its policies is a necessary component of the U.S. defense of Israel in the international community, President Barack Obama said.

Obama, in an interview with Jeffrey Goldberg posted Thursday on The Atlantic’s website, singled out Israeli Prime Minister Benjamin Netanyahu’s Election Day appeal in March to his followers to vote because Arab-Israeli voters were turning out in “hordes.”

“When something like that happens, that has foreign-policy consequences, and precisely because we’re so close to Israel, for us to simply stand there and say nothing would have meant that this office, the Oval Office, lost credibility when it came to speaking out on these issues,” Obama said.

“And when I am then required to come to Israel’s defense internationally, when there is anti-Semitism out there, when there is anti-Israeli policy that is based not on the particulars of the Palestinian cause but [is] based simply on hostility, I have to make sure that I am entirely credible in speaking out against those things, and that requires me then to also be honest with friends about how I view these issues.”

Obama has come under fire from pro-Israel groups and a number of Democrats and Republicans since 2009, when he told Jewish leaders early in his presidency that he was ending the policy of his predecessors, George W. Bush and Bill Clinton, of not airing disagreements with Israel in public. His critics say open disagreements undercut the alliance and make Israel more vulnerable.

The president in his interview said his differences with Netanyahu were often overblown.

“What we said publicly was fairly spare and mild, and then would be built up — it seemed like an article a day, partly because when you get in arguments with friends, it’s a lot more newsworthy than arguments with enemies,” he said.

Obama said he remained strongly committed to Israel, likening its defense to the struggle for civil rights.

“There’s a direct line between supporting the right of the Jewish people to have a homeland and to feel safe and free of discrimination and persecution, and the right of African-Americans to vote and have equal protection under the law,” Obama said.

“These things are indivisible in my mind. But what is also true, by extension, is that I have to show that same kind of regard to other peoples. And I think it is true to Israel’s traditions and its values — its founding principles — that it has to care about those Palestinian kids.”

Obama also said there was no inconsistency between his pronouncements saying the Iranian regime was anti-Semitic and his quest for a nuclear deal with the same regime.

“I think it is not at all contradictory to say that there are deep strains of anti-Semitism in the core regime, but that they also are interested in maintaining power, having some semblance of legitimacy inside their own country, which requires that they get themselves out of what is a deep economic rut that we’ve put them in, and on that basis they are then willing and prepared potentially to strike an agreement on their nuclear program,” he said.