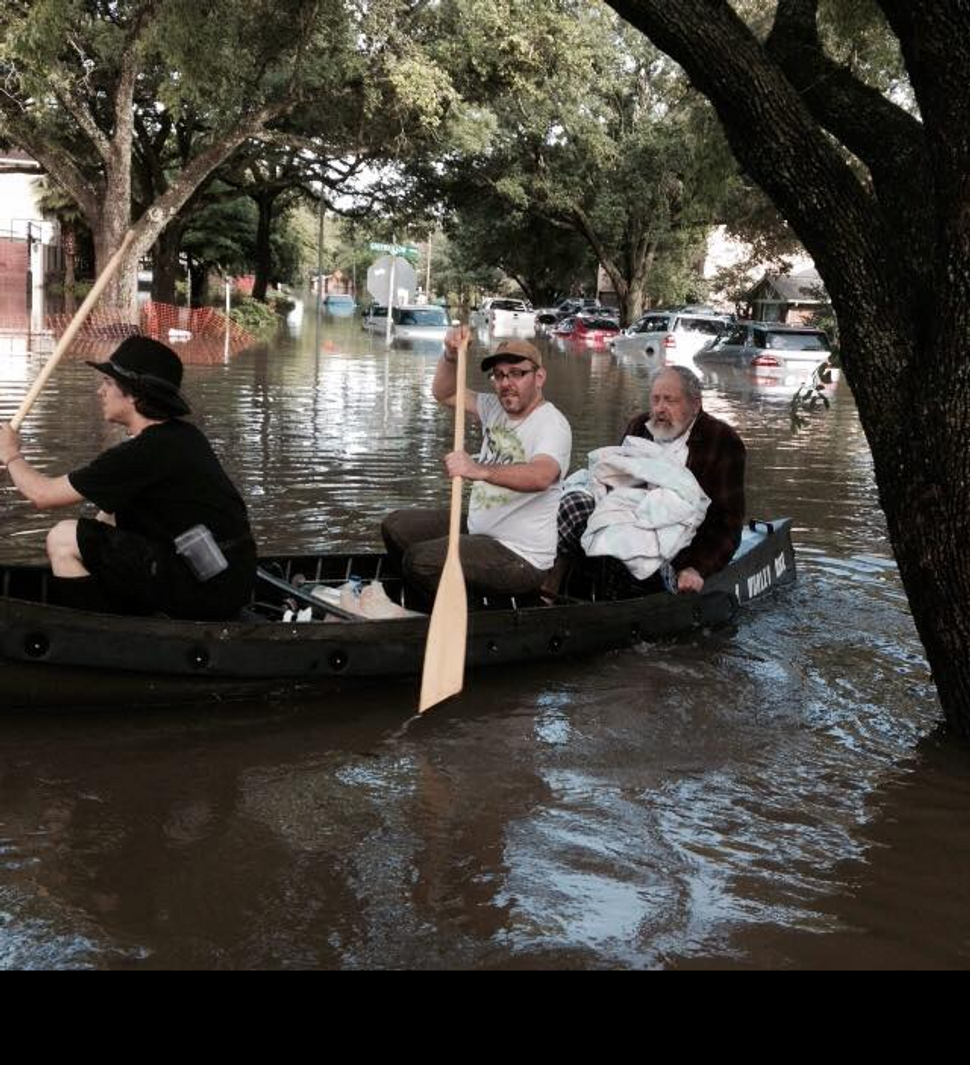 As floods triggered by days of heavy rain overwhelm Houston, the city’s Jewish community is scrambling to rescue those stranded by the fast-rising water.

Steven Paletz, 27, had been away for the Jewish holiday this weekend, returning last night to find six feet of water in his Houston home. He then watched his dining room table float away.

“My wife and I went to a sports store and bought a raft,” Paletz told the Forward. “Whoever has a kayak has been going down the street picking people up one by one.”

Houston’s Jewish community numbers about 50,000, according to Lee Wunsch, President and CEO of the Jewish Federation of Greater Houston.

“The flooding was very widespread,” Wunsch told the Forward, adding that “the heaviest hit neighborhoods happen to have large Jewish communities.”

Wunsch said that due to the extraordinary paralysis of the city’s infrastructure, the extent of the damage won’t be known for a couple of days.

“There’s flooding like I’ve never seen before, and I’ve been in Houston a long time,” Wunsch added.

At least four people have been killed in weather-related incidents in the Houston area, authorities said. More rain was expected Wednesday.

Paletz lives in Willow Meadows, a Houston neighborhood that is a hive of Jewish life, and is president of the local Civic Association. He also serves on the board of his shul, the United Orthodox Synagogues, which has been inundated with about five feet of water.

For Paletz all of this is new (“I’m from California — we get earthquakes not floods,” he explained). But Houston has been through this before.

After the devastation of Tropical Storm Allison in 2001, many people in the area rebuilt their ruined houses at a significant elevation, in compliance with new regulations. That foresight has apparently paid off. This time around, those elevated homes have become a refuge for the displaced and suddenly homeless, hovering safely above incoming waters.

“People whose homes were rebuilt then are now gathering people in,” Paletz said, demonstrating how neighbors were taking care of one another even as the city struggles to deal with the chaos.

“During times of crisis, members of the Jewish community will host one another for weeks,” said Eitan Urkowitz, whose grandfather, Joseph Radinsky, rabbi emeritus of United Orthodox Synagogues, was paddled to safety by a neighbor in a canoe. “After a hurricane a few years back, one family on my side of town had power so they hosted 100 people for lunch and dinner every day for a month.”