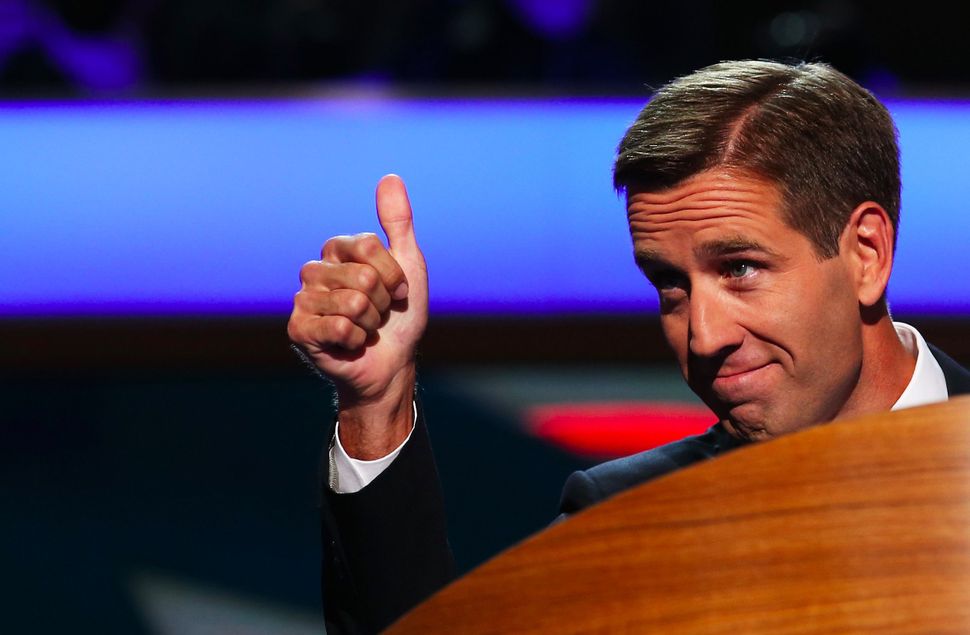 “The entire Biden family is saddened beyond words,” Vice President Biden said in a statement released by the White House.

“We know that Beau’s spirit will live on in all of us, especially through his brave wife, Hallie, and two remarkable children, Natalie and Hunter,” he said.

Beau Biden had announced last year he planned to run for governor of Delaware in 2016.

He was diagnosed with brain cancer in August 2013 and underwent surgery, radiation and chemotherapy. After getting a “a clean bill of health” in November of that year, his cancer recurred in the spring of 2015, the vice president’s office said.

He sought aggressive treatment and had been hospitalized this month at the Walter Reed Army Medical Center outside Washington. His family was with him when he died.

“Beau embodied my father’s saying that a parent knows success when his child turns out better than he did,” the vice president said. “In the words of the Biden family: Beau Biden was, quite simply, the finest man any of us have ever known.”

Beau Biden was very close to his father and a familiar presence in his political campaigns.

He served a year-long tour in Iraq as a member of the Delaware Army National Guard. He suffered a mild stroke in 2010.

President Barack Obama said he and his wife, first lady Michelle Obama, were grieving. He paid warm tribute to Beau Biden, saying he took after his father.

“He studied the law, like his dad, even choosing the same law school. He chased a life of public service, like his dad, serving in Iraq and as Delaware’s Attorney General,” Obama said in a statement.

“Like his dad, Beau was a good, big-hearted, devoutly Catholic and deeply faithful man, who made a difference in the lives of all he touched, and he lives on in their hearts.”

The vice president has not publicly ruled out a run for president in 2016, but he would face tough odds to gain an advantage over his friend, former Secretary of State Hillary Clinton, who is far ahead in public opinion polls in the race for the Democratic presidential nomination.

“My heart is broken for the family of Beau Biden – a wonderful man who served his country with devotion and lived his life with courage,” she wrote.

The vice president has faced family tragedy before.

Shortly after winning election to the U.S. Senate in 1972, his wife Neilia and three children were in a car crash. Neilia and their daughter were killed, while their two sons, Beau and Hunter, were injured.

Biden opted not to move to Washington, choosing instead to make the 2 1/2-hour daily round-trip train commute from Delaware to his Senate job so he could spend more time with his sons. He married Jill Jacobs some five years after his first wife died.

Biden took office as vice president when Obama entered the White House in January 2009. He has a deep knowledge of Washington politics after decades in Congress and a folksy, avuncular style that contrasts with what many consider Obama’s more aloof manner.

Biden regularly mentions his family in speeches and sometimes has his grandchildren accompany him on diplomatic trips abroad.