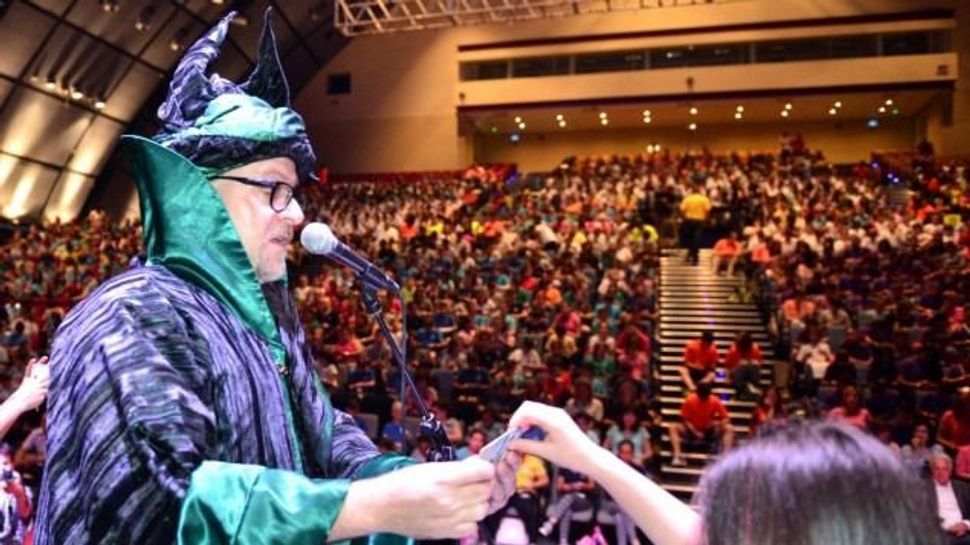 Image by Courtesy of Beit HaGefen

An Israeli magician and a Haifa coexistence group broke the Guinness World Record for the largest magic lesson.

The magician, Cagliostro, taught a group of 1,573 fifth- and-sixth graders from Haifa a card trick on Monday. The event, called “Haifa Magic for Peace,” was held in conjunction with Beit Hagefen, a cultural center that works to foster dialogue and coexistence between the Jewish and Arab communities in the city.

The children, who came from 25 schools throughout Haifa, represented ethnic and religious communities, including Jews, Muslims, Christians, Bahais and Druze.

The trick included eight cards with words such as peace, coexistence and dialogue written on them in Hebrew and Arabic. Each child performing the trick asked a friend to pick a card and return it to the deck, after which the child used a magic wand to make it rise above the rest. In unison, the children recited the magic words — “Peace Be With You” — in Hebrew and Arabic.

“It wasn’t just about teaching a trick or breaking a record, it was about bringing people together to speak and get to know each other,” Cagliostro said in a statement. “I hope that each and every one of these children will show the trick to at least 30 of their friends and family, taking the message of peace an understanding to over 50,000 people, because at the end of the day, peace is in our hands.”

Cagliostro had set the record for the largest magic lesson in August 2012 with 644 students. He was overtaken two months later by magician Kevin McMahon with 1,063 students, the Times of Israel reported.