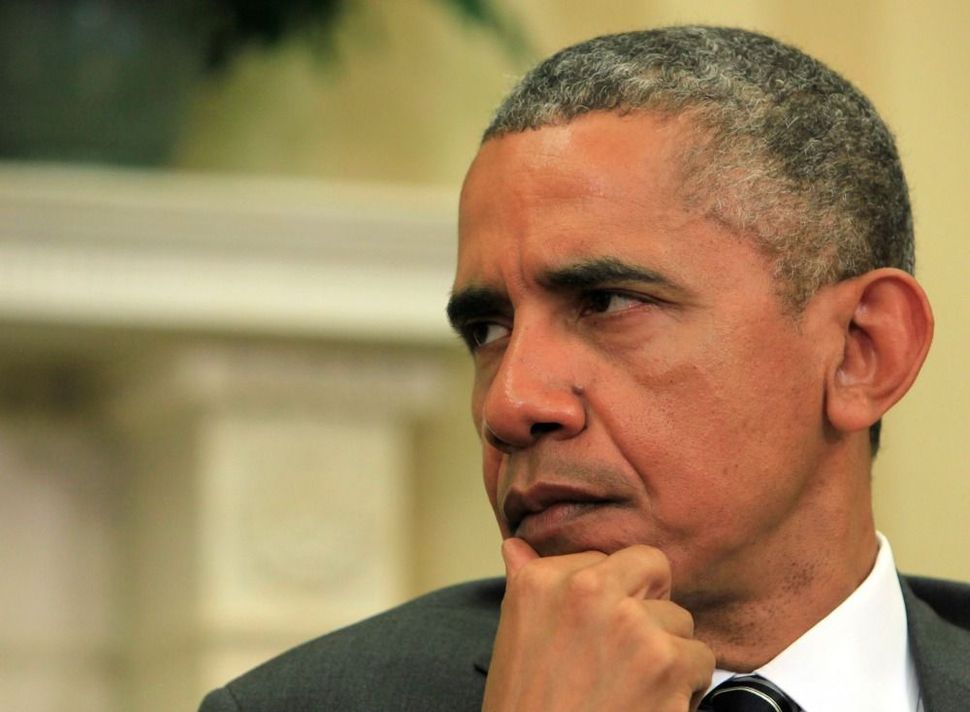 Obama also suggested that continued U.S. diplomatic defense for Israel at the United Nations over the Palestine dispute may be reviewed, while reaffirming U.S. support for Israeli security in a conflict-riven Middle East.

In an interview with Israeli television aired on Tuesday, he offered a bleak outlook for decades of negotiations on Palestinian statehood bearing any fruit during the 18 months he has left in office.

“I don’t see the likelihood of a framework agreement,” Obama said in an interview with Uvda, a current-affairs program produced by Israel’s top-rated Channel Two and Keshet television. “The question is how do we create some building blocks of trust and progress.”

While Obama has acknowledged the geographical and ideological divisions among Palestinians that have bedeviled peace efforts, in the interview — taped in the White House on Friday — he focused on Netanyahu’s policies.

On the eve of his March 17 election to a fourth term, Netanyahu said there would be no Palestinian state if he remained premier. He argued that any withdrawals from occupied territory by Israel would embolden hardline Islamist guerrillas arrayed on its borders.

Netanyahu has since sought to row back from those remarks but his peace overtures have met with skepticism from the Palestinians as well as Western diplomats.

Obama said Netanyahu’s position “has so many caveats, so many conditions that it is not realistic to think that those conditions would be met at any time in the near future.

“So the danger is that Israel as a whole loses credibility. Already, the international community does not believe that Israel is serious about a two-state solution.”

The last round of U.S.-sponsored talks stalled more than a year ago, with Palestinians blaming Israeli settlement-building in the occupied West Bank and East Jerusalem, among the territories where they seek an independent state.

Obama said now was the time for a re-evaluation of “how we approach defending Israel on the international stage around the Palestinian issue.”

He cited pro-Palestinian resolutions at the United Nations that Washington has long blocked in the name of encouraging direct diplomacy between the sides. Asked whether such U.S. vetoes would continue, Obama sounded circumspect.

“It is more difficult for me to say to them, ‘Be patient, wait, because we have a process here.’”

Israelis and Palestinians both, Obama said, should work with the United States to “move off what appears right now to be a hopeless situation and move it back towards a hopeful situation.” He did not offer more concrete solutions.

Netanyahu’s office did not immediately comment on the Obama interview. Speaking at an Israeli missile defense drill earlier on Tuesday, Netanyahu stressed the need for self-sufficiency: “When it comes to Israel’s security, I rely, first of all, on ourselves.”—Reuters