Deep Splits Bared in Israeli Coalition on Peace With Palestinians 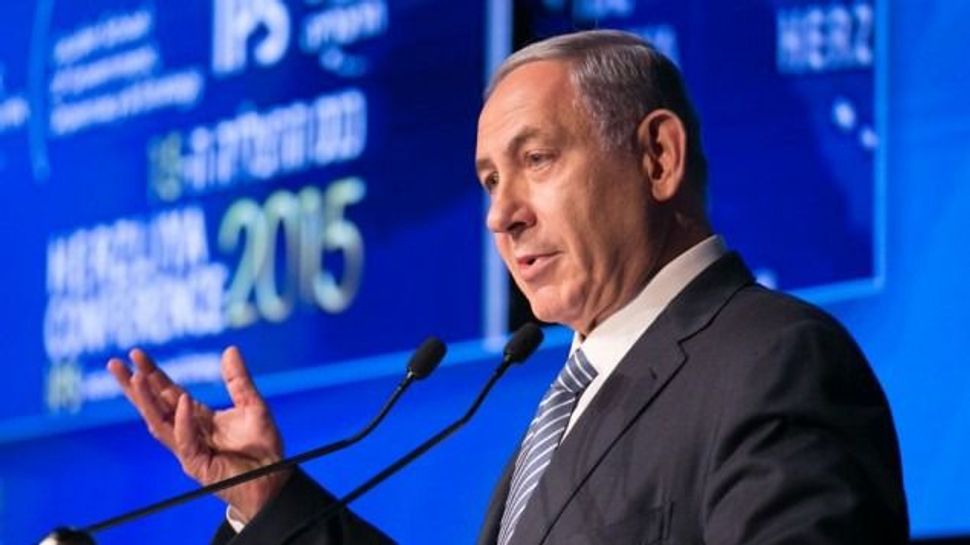 (JTA) — When Israel’s coalition government formed last month, its constituent parties all but ruled out establishing a Palestinian state in the near future. But that doesn’t mean they can agree on what to do instead.

Speaking at the Herzliya Conference this week, Israel’s premier diplomatic and security policy gathering, senior Israeli government officials struck different and sometimes conflicting tones on what Israel’s policy should be toward the Palestinians. Even within the ruling Likud party, officials advanced significantly different proposals for the the future of the West Bank.

Some favor indefinite control of the territory. Others support negotiations and interim steps to prepare the ground for a future partition. Others want to hang tight while the wars roiling the Middle East play out.

Prime Minister Benjamin Netanyahu, who on the eve of his re-election in March appeared to reverse his earlier support for Palestinian statehood, portrayed himself in his conference address on Tuesday as having never shifted his position on the subject. He called on the Arab world to push the Palestinians toward negotiations and insisted that, in a final agreement, the Palestinian Authority would have to agree to a demilitarized state and recognize Israel as the Jewish state — a condition they have thus far refused.

“There might be an opening, because some of the Arab states silently agree with what I say,” Netanyahu said. “They might be in the position to influence the Palestinians to adopt a more conciliatory or positive approach. It will be hard, because all politics is theater, and international politics is theater, too, and everyone is cast in a role.”

Held annually at the Interdisciplinary Center Herzliya, a college founded in 1994, the Herzliya Conference brings together top officials from Israel’s government, diplomatic and defense arenas to discuss threats facing Israel and the Middle East. The conference, held from June 7-9, offers a peek into the minds of Israel’s leading decision makers and occasionally provides a venue for Israeli leaders to make important announcements.

There were no such big developments this year, but the conference did reveal the extent of the disagreement within the Israeli government about the appropriate path forward in resolving Israel’s decades-long conflict with the Palestinians.

Likud Defense Minister Moshe Ya’alon was more pessimistic than his boss on Tuesday, declaring a “stable agreement” with the Palestinians unlikely in his lifetime. Though Ya’alon, who is 64, suggested measures to improve the Palestinian economy and local Palestinian government, he rejected any limitation on Israeli military operations in the West Bank, saying that could invite a takeover by Hamas, the militant group that governs Gaza.

“There’s really something stable here,” Ya’alon said, referring to the West Bank. “Should we upset it out of wishful thinking? So we’re suggesting, within the framework of not ruling them, steps that make it possible for both sides to live in welfare, to live with respect, to live in security without illusions.”

Likud Interior Minister Silvan Shalom, who would serve as Israel’s chief delegate to peace talks should they resume, struck a more optimistic tone in his Monday address, calling for a regional conference of Israel and the Arab states to confront shared regional threats, and encouraging the Palestinians to return to bilateral negotiations with Israel without preconditions.

“We believe the only way to achieve a solution is through peace, and peace can be achieved only through negotiations,” Shalom said. “If they are willing to do so, and to resume the negotiations, they will find Israel as a real and serious partner to peace.”

But Likud Deputy Foreign Minister Tzipi Hotovely dismissed the prospect of a peace deal entirely. Instead, she said mass Jewish immigration to Israel is the solution, as millions more Jews would eliminate any danger of Palestinians gaining a majority in Israel.

At last year’s conference, held just months after an intensive round of Israeli-Palestinian talks had collapsed, pro-settler Jewish Home Chairman Naftali Bennett advocated annexing the Etzion settlement bloc south of Jerusalem. This year, with the prospect of Israeli withdrawal no longer under discussion, he made scant mention of the West Bank, saying simply that he and the foreign governments urging territorial concessions would have to “agree to disagree.”

Instead, he turned to another territory Israel captured in 1967, the Golan Heights, calling on the international community to recognize Israel’s sovereignty there. The civil war in Syria has made withdrawal impossible, he said, advocating instead that Israel move tens of thousands of Jews to the strategic plateau in the next five years.

“Whom should we give the Golan to, to al-Nusra? To al-Qaida?” he asked, referring to two terrorist groups active in Syria. “Why do they still not recognize the Golan? What’s the reasoning? If we had listened to the world, we would have given away the Golan, and ISIS would have been on the Sea of Galilee.”

While they disagreed on the peace process, Israel’s officials advanced a unified front in opposing boycotts of Israel. Many alluded to recent statements by Stephane Richard, CEO of the French telecommunications giant Orange, suggesting he would pull his business out of Israel. They called on Israel to fight back against boycott efforts, marshaling the buying power of its supporters to boycott companies that boycott Israel.

“We have disagreements in many other issues — peace, security, economy,” Shalom said. “But we are very united about fighting back [against] the boycott. And I am sure that if we keep our unity, finally, we will prevail.”

Deep Splits Bared in Israeli Coalition on Peace With Palestinians