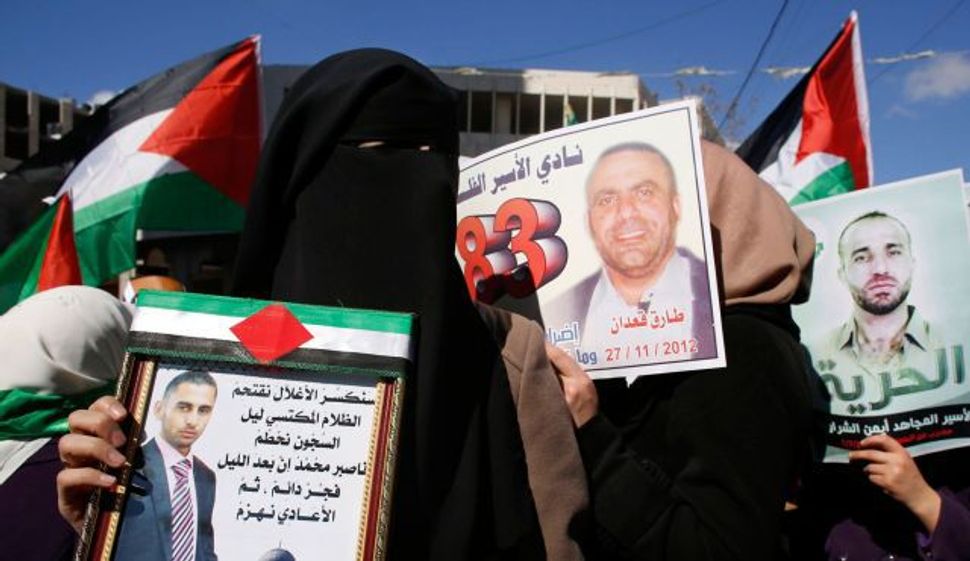 A Palestinian woman holds a photograph of a prisoner on hunger strike during a rally in the West Bank city of Hebron to show solidarity with prisoners on hunger strike in Israeli jails, in February. Image by Haaretz

Israel’s cabinet approved on Sunday a proposed law that would enable authorities to force-feed Palestinian prisoners who are on hunger strike, a practice opposed by the country’s medical association.

Israel has long been concerned that hunger strikes by Palestinians in its jails could end in death and trigger waves of protests in the occupied West Bank and East Jerusalem.

But Israel’s Medical Association, which considers force- feeding a form of torture and medically risky, has urged Israeli doctors not to abide by the law if it is passed.

Internal Security Minister Gilad Erdan, who sponsored the bill, said the cabinet’s support for the legislation would allow him to re-submit it to parliament for two final votes in the near future. It already passed a preliminary vote in the legislature before Israel’s parliamentary election in March.

“Hunger strikes by imprisoned terrorists have become a weapon with which they are trying to threaten the State of Israel,” Erdan wrote on Facebook. “The cabinet’s decision today sends a clear message: we will not blink in the face of any threat.”

Qadoura Fares, chairman of the Palestinian Prisoners Club that advocates on behalf of Palestinians in Israeli jails, called the legislation racist and a violation of international law. Under existing Israeli law, patients cannot be treated against their will, although an ethics committee can be asked to intervene.

Demanding an end to his detention without trial, a Palestinian prisoner, Khader Adnan of the Islamic Jihad militant group, has been on a hunger strike in jail for the past 41 days, refusing solid food and drinking only water.

Adnan went on hunger strike for 66 days during a previous detention period in 2012, the longest such Palestinian protest. It ended when Israeli authorities promised to release him.

He was jailed again in July 2014 under so-called “administrative detention.”

Israel’s use of a decades-old policy of detaining some Palestinians without formal charge has drawn international criticism. Israel says the procedure is necessary to avoid exposing confidential information in trials.