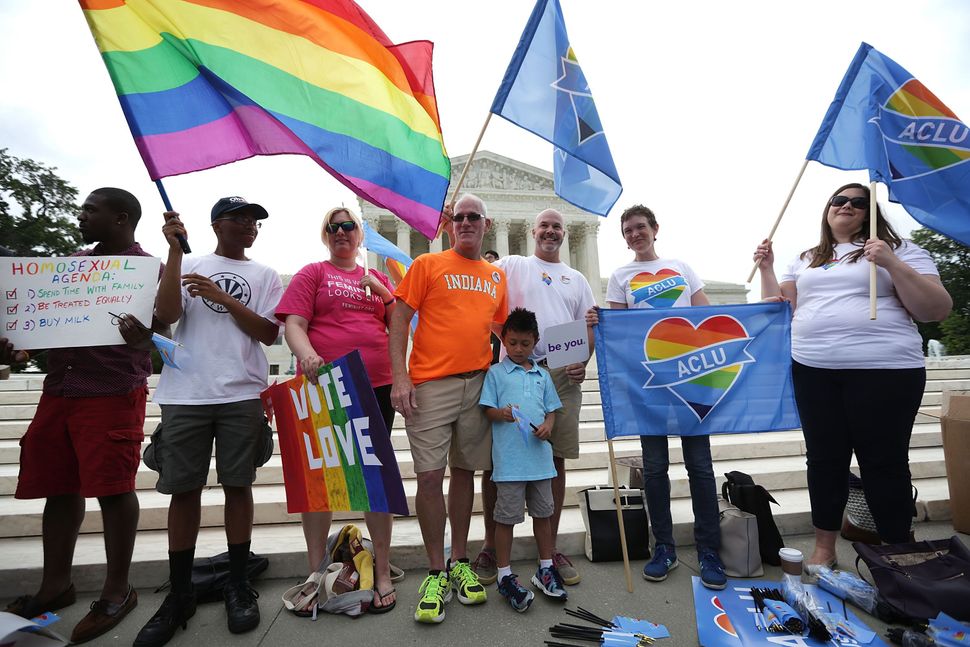 The Supreme Court ruled on Friday that the U.S. Constitution provides same-sex couples the right to marry, handing a historic triumph to the American gay rights movement.

The court ruled 5-4 that the Constitution’s guarantees of due process and equal protection under the law mean that states cannot ban same-sex marriages. With the ruling, gay marriage will become legal in all 50 states.

Justice Anthony Kennedy, writing on behalf of the court, said that the hope of gay people intending to marry “is not to be condemned to live in loneliness, excluded from one of civilization’s oldest institutions. They ask for equal dignity in the eyes of the law. The Constitution grants them that right.”

Kennedy, a conservative who often casts the deciding vote in close cases, was joined in the majority by the court’s four liberal justices.

In a dissenting opinion, conservative Justice Antonin Scalia said the decision shows the court is a “threat to American democracy.” The ruling “says that my ruler and the ruler of 320 million Americans coast-to-coast is a majority of the nine lawyers on the Supreme Court,” Scalia said.

Conservative Chief Justice John Roberts also read a summary of his dissenting opinion from the bench.

There are currently 13 state bans in place, while another state, Alabama, has contested a court ruling that lifted the ban there.

The ruling is the Supreme Court’s most important expansion of marriage rights in the United States since its landmark 1967 ruling in the case Loving v. Virginia that struck down state laws barring interracial marriages.

The ruling is the latest milestone in the gay rights movement in recent years. In 2010, Obama signed a law allowing gays to serve openly in the U.S. military. In 2013, the high court ruled unconstitutional a 1996 U.S. law that declared for the purposes of federal benefits marriage was defined as between one man and one woman.

Reaction came swiftly. President Barack Obama, the first sitting president to support gay marriage, said on Twitter, “Today is a big step in our march toward equality. Gay and lesbian couples now have the right to marry, just like anyone else.”

Hillary Clinton, the front-runner for the 2016 Democratic presidential nomination, wrote on Twitter she was “proud to celebrate a historic victory for marriage equality.” Until 2013, she had long said she was opposed to same-sex marriages, but said her view had since “evolved.”

Presidential candidate Bernie Sanders, who is Jewish, lauded the decision. “I am very glad the Court has finally caught up to the American people,” he said.

Republican presidential candidate Jeb Bush added, “Guided by my faith, I believe in traditional marriage. I believe the Supreme Court should have allowed the states to make this decision.”

The decision follows rapid changes in attitudes and policies toward gay marriage in America. It was not until 2003 that the Supreme Court threw out state laws banning gay sex. And it was not until 2004 that the Massachusetts became the first state to legalize same-sex marriage. Gay marriage has gained increasing acceptance in opinion polls in recent years, particularly among younger Americans.

Gay marriage also is gaining acceptance in other Western countries. Last month in Ireland, voters backed same-sex marriage by a landslide in a referendum that marked a dramatic social shift in the traditionally Roman Catholic country.

Ireland followed several Western European countries including Britain, France and Spain in allowing gay marriage, which is also legal in South Africa, Brazil and Canada. But homosexuality remains taboo and often illegal in many parts of Africa and Asia.

The Supreme Court’s ruling came in a consolidated case pulling together challenges filed by same-sex couples to gay marriage bans in Kentucky, Michigan, Ohio and Tennessee.

Same-sex marriage was legal in 36 states and Washington, D.C.. In a 37th, Alabama, a federal court struck down the gay-marriage ban but the state supreme court has stopped local officials from issuing marriage licenses to gay couples.

Opponents say same-sex marriage legality should be decided by states, not judges. Some opponents argue it is an affront to traditional marriage between a man and a woman and that the Bible condemns homosexuality.

The emotions of the issue were apparent during the court’s April 28 oral arguments in the case when a protester in the courtroom shouted at the justices that they would “burn in hell” if they backed gay marriage.

The Obama administration argued on the side of the same-sex marriage advocates. He has said he hoped the court issued a ruling preventing states from banning gay marriage.

The legal repercussions for same-sex couples are broad, affecting not just their right to marry but also their right to be recognized as a spouse or parent on birth and death certificates and other legal papers.

Big business had urged the justices to support gay marriage, saying in a brief submitted in the case that inconsistent state laws impose burdens on companies and that marriage bans can conflict with corporate anti-discrimination and diversity policies.—Reuters