For French Jews, Fear and Defiance Mix 6 Months After Attacks 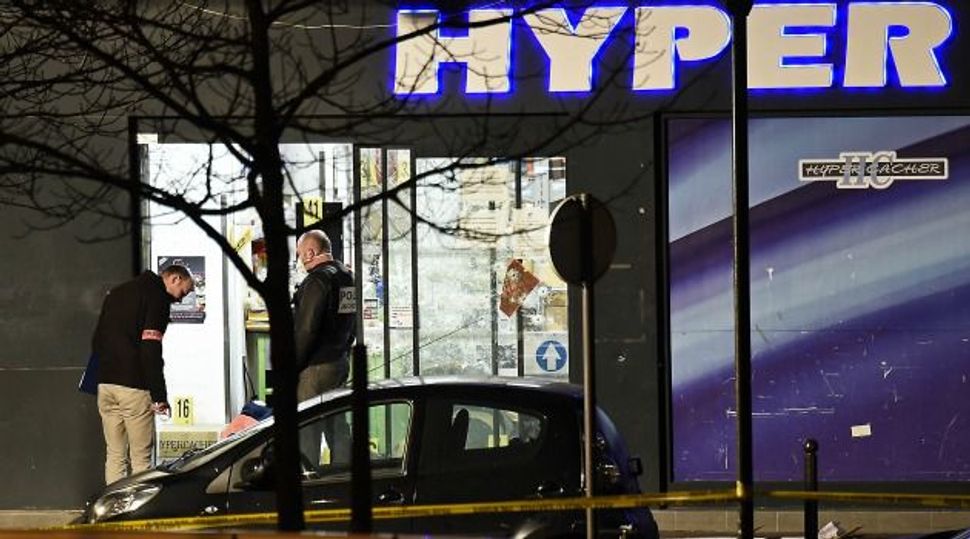 On her way home from food shopping, Mirelle Bensason pauses to rearrange wilted wreaths and posters hanging on the perimeter fence that police set up around the kosher supermarket where an Islamist gunned down four Jewish shoppers six months ago.

Bensason, who does not keep strictly kosher, is not a Hyper Cacher regular, but sees the continued flow of customers into the shop as proof of the Jewish community’s resilience.

Hyper Cacher reopened in March, about two months after Amedy Coulibaly entered the chain’s Port de Vincennes location and took its patrons hostage. Since it reopened, the store is guarded during its hours of operation by police officers toting machine guns.

“I take care of the commemorations on this fence to remember the victims and my pain, our pain,” said Bensason, a blue-eyed grandmother of four who was born in Morocco and now lives on the eastern edge of Paris, not far from Hyper Cacher. “But we’re not afraid to come shopping here. We refuse to be cowed by our enemies. Life has not changed much, except for the pain that comes with loss.”

Defiance is a common reaction among many French Jews to the growth of violent anti-Semitism that has been building for years and culminated at the shop on Jan. 9. But there is real and palpable fear that the Hyper Cacher attack will turn out to be a watershed moment for the Jews of France — one that accelerated already record immigration to Israel, caused a sharp drop in sales at kosher shops and introduced new levels of anxiety to the lives of the Jews who stayed.

Yvan Lellouche, a founder of the Union of Kosher Consumers of France, which advocates for the distribution and consumption of kosher food, spoke of “a sharp drop in traffic at kosher shops” in the Paris area since January compared to the corresponding period last year. The union does not compile statistics, but Lellouche said anecdotal evidence suggested sales were down as much as 40 percent.

“We’ve seen a decrease in traffic at Jewish shops until Passover, when it picked up again back to normal levels,” said Lellouche, whose acts as a liaison between kosher shop owners and French police. “Then the peak was over and the decrease continued.”

Not all of the approximately 20 shops in the Hyper Cacher supermarket chain have such tight police protection. Yet following the attack in January, the French government assigned a total of 10,412 soldiers and policemen to guard hundreds of Jewish schools, synagogues and other Jewish institutions. Hundreds of additional uniformed and plainclothes personnel patrol what they consider high-risk areas — in other words, areas where many Jews live.

In December and January, bullet holes from an air gun were found on the walls of two kosher restaurants in Paris. The previous month, a kosher sushi restaurant was firebombed in Paris’ heavily Jewish 17th arrondissement, or district.

“I say this with pain but, frankly, I’d be very worried if my children worked at a kosher shop,” said Lellouche, a father of five.

Staff at the Hyper Cacher location targeted in the attack and their counterparts at Charles Traiteur, the adjacent kosher deli, said they have not seen a significant decrease in their sales.

But Yaakov Deri, who owns the La Boucherie Gourmet deli, which is situated across the road from Hyper Cacher, needs no spreadsheet to confirm a slowdown. Sales, he said, have dropped drastically since January.

“I’m feeling it in my pocket,” he said. “Some of my customers dart in and leave as soon as possible, wanting to spend as little time as possible in a place they regard as dangerous.”

Also impacting kosher shop sales: shoppers organizing discount bulk purchases of kosher food from abroad and, of course, the departure for Israel of at least 20,000 Jews since 2008. Some 70 percent of those emigres left after 2012, when a jihadist killed four Jews, including three children, at a Jewish school in the southern city of Toulouse.

The Jewish Agency for Israel, which facilitates Jewish immigration to Israel, is expecting about 8,000 French Jews to arrive this year. It would set a new record over last year’s all-time mark of 6,668 newcomers — the highest number that year from any country.

Among those preparing to leave this summer is a young mother who came on Tuesday to shop at Hyper Cacher, perhaps for the last time as a French resident.

The scene outside the Hyper Cacher kosher market as Israeli Prime Minister Benjamin Netanyahu pays his respect to the victims of the terrorist attacks in Paris, Jan. 12, 2015. (Aurelien Meunier/Getty Images) “We’re grateful to police and the army for protecting us,” said the mother, who declined to give her name because she said doing so might endanger her children. “But I can’t leave my kids at a school that needs military protection. I can’t do my shopping like this.”

It is not yet is known what effect the Hyper Cacher shootings will have on Jewish school enrollment. But Roger Cukierman, president of the CRIF umbrella of French Jewish groups, said two months before the kosher market attack that while some Jewish parents fear sending their children to at-risk, private Jewish schools, anti-Semitism also means they are hesitant about enrolling them in public ones. Many emigrate or opt for Catholic schools.

Another longtime Hyper Cacher shopper who, citing business reasons, identified himself only by his surname, Fitoussi, said the carnage earlier this year — 12 were killed by an Islamist at a satirical French newspaper, two days prior to the kosher market attack — triggered his decision to move with his wife to Israel later this year.

A Sephardic Jewish businessman who was born in Sousse, Tunisia — the scene of a massacre of 38 people last month by an Islamic terrorist who targeted Western tourists — Fitoussi has lived in France for five decades.

“I love France, it gave me so much,” he said during an interview inside Hyper Cacher, where shelves are stocked with Israeli imports and a year-round supply of Badatz-certified matzah. “But what happened here, I can’t take it anymore. I can’t live like this.”

Like many French Jews, Fitoussi, who resides in an affluent district of Paris, takes care to always wear a hat over his kippah when he walks to synagogue on Shabbat, so as not to be identified as Jewish and invite attack. Last year, of the 851 hate crimes against Jews recorded by the Jewish community, 241 were violent attacks. The previous year, the figures were 423 and 105, respectively.

But last month, Fitoussi was called “dirty Jew” on the street on his way to synagogue even though he was wearing a hat.

“They are looking for us now,” he said, “and the more we hide, the closer they will look.”

For French Jews, Fear and Defiance Mix 6 Months After Attacks