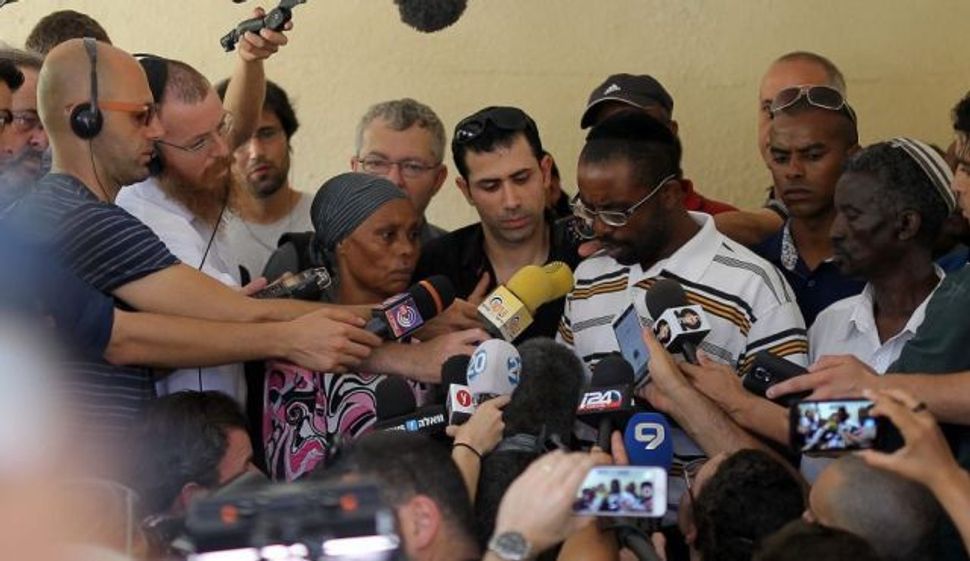 An Israeli official apologized for telling a family of immigrants from Ethiopia not to criticize Benjamin Netanyahu’s handling of their son’s captivity in Gaza.

Lior Lotan, the prime minister’s aide for missing and captive persons, apologized Thursday in a written statement, following the publication of a recording of his meeting earlier this week with the parents of Avera Mengistu.

“I apologize for the manner and the content of some of the things I said in a long conversation,” Lotan said.

Mengistu is believed to have climbed last September over the security fence between Israel and Gaza. His presumed captivity — which Hamas denies – was under a gag order that was lifted this week. Also missing is an Israel Bedouin who crossed over to Gaza in April and has not returned.

According to the Mengistus, Netanyahu ignored their appeals and letters until the gag order was lifted. Then, with Lotan present, he made called them on the phone. The family criticized Netanyahu’s failure to respond to their letters.

In the recording, published by Channel 10 Thursday, Lotan is then heard threatening the Mengistus that Netanyahu will care less about their son if they complain.

“Your ability to influence is lower after this talk,” he said. “The Prime Minister is a person too. You think he’ll get slammed, slammed, slammed and this will be the most important thing to him in the world?”

Following the conversation’s publication, Netanyahu said Lotan “should not have said these things” and invited the family to a meeting at his residence.

In recent months, Israeli Ethiopians have staged two violent demonstrations against their perceived discrimination. Avi Yalo, a leader of those protests, told Haaretz that the handling of Mengistu’s presumed captivity “may be connected to his skin color.”

Lotan warned Mengistu’s family against making such allegations, saying it would play into the hands of Hamas.

“Whoever stacks on Avera’s back the story between the Ethiopian community and the State of Israel is leaving him for another year in Gaza,” Lotan said.