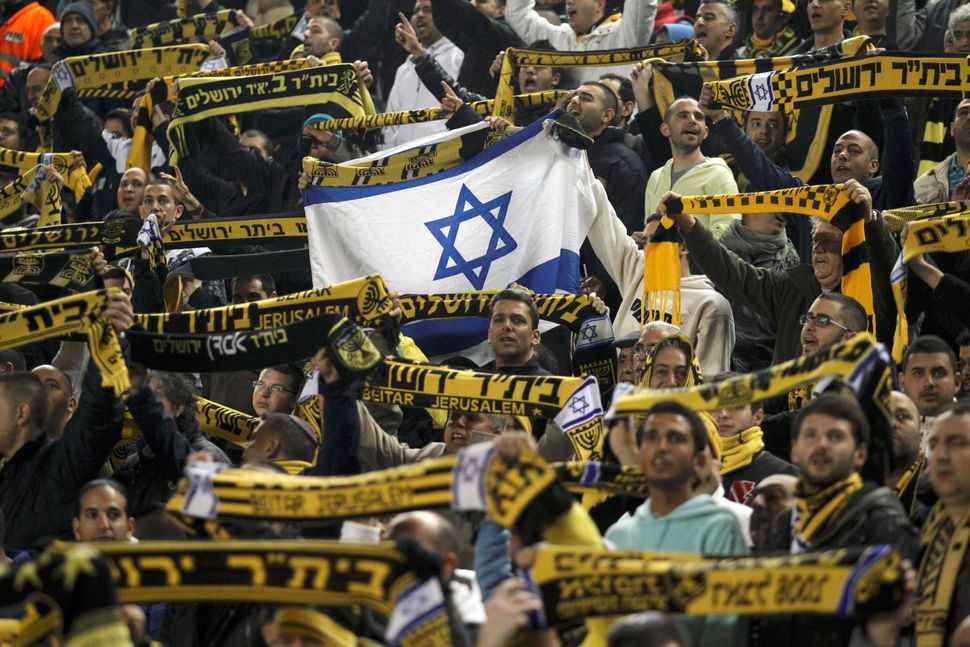 Israeli media reported that a Dubai businessman is interested in investing in Beitar Jerusalem, a soccer team whose hardcore fanbase is notoriously ultranationalist and anti-Arab.

The owner of Beitar Jerusalem said on Friday he was putting the Israeli Premier League club up for sale because he felt ashamed of supporters who threw smoke bombs, flares and firecrackers at a Europa League qualifying round match in Belgium.

Nine-man Beitar were thrashed 5-1 at Charleroi in the first leg tie on Thursday. The match was held up at the start when fans threw dozens of incendiary devices onto the pitch, enveloping it in smoke.

Towards the end of the match, Charleroi goalkeeper Nicolas Penneteau was hit by a hard object thrown from the crowd, which forced another delay. Beitar can expect severe punishment from European soccer’s governing body, UEFA.

“I am ashamed … I have decided to end my involvement with Israeli soccer and am returning to the United States … I will appoint a trustee to run the club until somebody is willing to buy it,” Eli Tabib said in a statement.

Beitar are a bastion of Israel’s political right-wing and a group of supporters known as “La Familia,” that the club has been unable to control, have been openly abusive to Israel’s Arab minority.

Israeli media said some Charleroi fans had made Hitler salutes during the fracas. Beitar coach Slobodan Drapic said Beitar’s fans had been provoked, although he did not explain why some had come to the match with the flares and smoke bombs. It was unclear how so many devices were smuggled into the stadium.

The club is the only major Israeli outfit that has never employed an Arab player due to fan pressure and this was one of the grievances that the Palestinian FA cited in its call for Israel to be suspended from FIFA this year.

Beitar have by far the worst disciplinary record in Israel’s Premier League and over the past decade have faced about two dozen hearings and received various punishments, including points deductions, fines and matches behind closed doors.

Israeli Sports Minister Miri Regev condemned the action of the fans, saying on her Facebook page a “small group of thugs” had defamed Israeli soccer and called on Israeli police to cooperate with their Belgian counterparts.

Beitar are due to host Charleroi in the return leg at Jerusalem’s Teddy Kollek Stadium next week and Regev said security, which is always heavy at Beitar matches, would be tightened further.

Regev said Beitar fans should be banned from attending.—Reuters