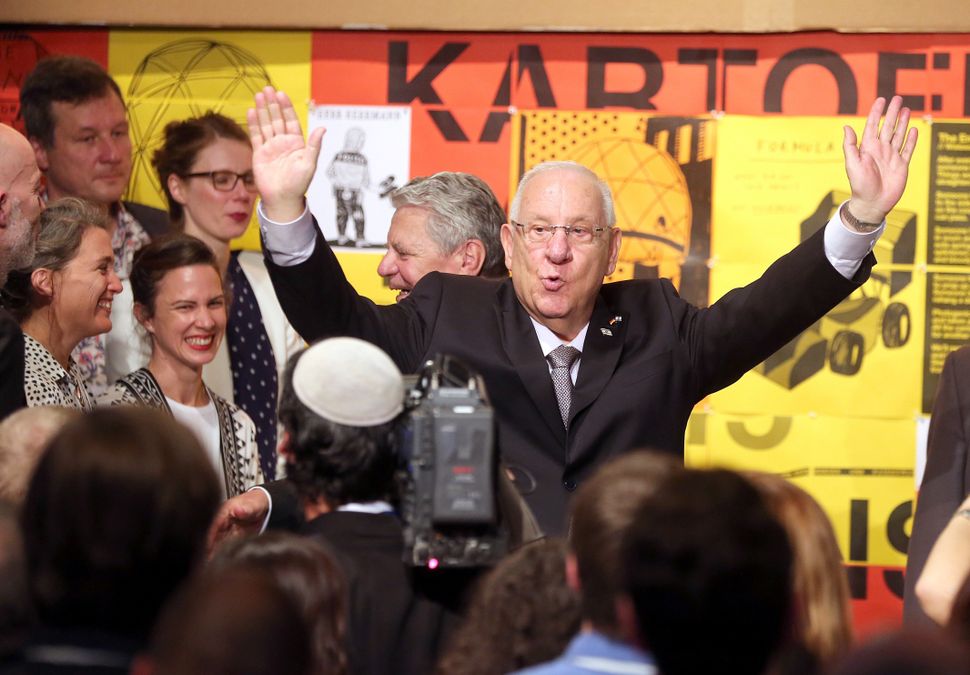 Israeli President Reuven Rivlin hosted leaders from the Reform, Conservative, Orthodox and secular movements at his residence for an event demonstrating Jewish unity.

It was a significant move for Rivlin, who has drawn criticism in the past for denigrating non-Orthodox Jews. Earlier in his career, he had declined to say whether as president he would recognize Reform rabbis as rabbis. In 1989, he compared Reform Judaism to idol worship, and he encountered controversy this year for excluding a Conservative rabbi from a bar mitzvah service at his residence.

At the event Thursday, Rivlin welcomed a Conservative and a Reform rabbi, referring to them by their titles. He spoke about the importance of accepting all Jewish streams, and received a standing ovation.

“One could disagree with the positions and opinions of members of the Reform or Conservative movements, but one could not deny their dedication or the clear voice with which they speak in support of the State of Israel, here and around the world,” he said at the event. “We must not forget for a moment that fierce debates are the sincere and genuine expression of a concern for us all – Orthodox, Reform, Conservative, and secular – for the present day, and for the future of the Jewish people.”

Each leader then taught a short Jewish text lesson connected to the upcoming fast day of the Ninth of Av, which commemorates the destruction of Judaism’s two Holy Temples. Rabbinic tradition says the Second Temple was destroyed due to baseless hatred, and the speeches all centered on increasing acceptance and tolerance among Jews of different streams.

“We need to stop seeing life in the framework of black and white,” Azari said. “We need to see the importance of recognizing the other, even with his complexities and weaknesses. We need to seek out the good. We need to learn to compromise.”