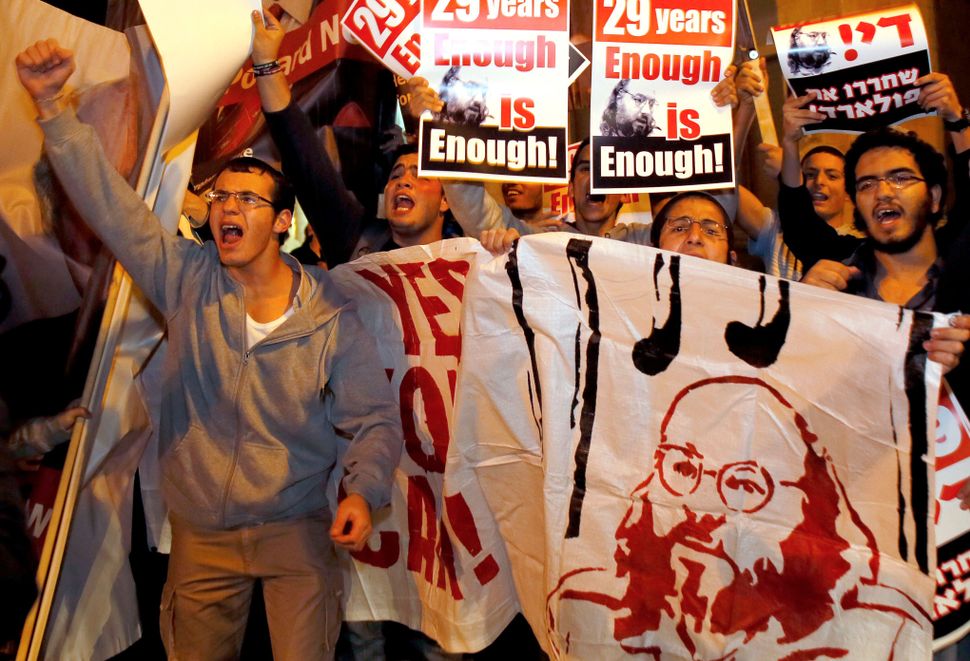 The Justice Department said Pollard must serve his full 30-year sentence. It stressed that he has long been eligible for consideration for parole in November but insisted that the administration has no say in how that process unfolds.

One U.S. official rejected the notion that Pollard’s release would have anything to do with trying to smooth tense relations with Israel over President Barack Obama’s nuclear deal with Iran, which Prime Minister Benjamin Netanyahu fiercely opposes.

The Journal reported that some U.S. officials are pushing for Pollard’s release in a matter of weeks, while others expect it could take months, possibly at his parole consideration date in November.

Successive Israeli governments have appealed for Pollard’s release, which would be hugely popular in Israel, but U.S. presidents have always resisted. Pollard, 60, was convicted in 1987 of spying for Israel and sentenced to a life term.

The Justice Department said it “has always and continues to maintain that Jonathan Pollard should serve his full sentence for the serious crimes he committed.”

“Mr. Pollard’s status will be determined by the United States Parole Commission according to standard procedures,” said Alistair Baskey, a spokesman for the White House National Security Council. “There is absolutely zero linkage between Mr. Pollard’s status and foreign policy considerations.”

Pollard’s supporters say he is being punished too harshly since Israel is a U.S. ally and much of the classified information he passed on caused no damage to the United States and was intelligence that Israel previously had access to.

His supporters also say he should be released because of his poor health, with his attorney saying he suffers from diabetes and high blood pressure.

Netanyahu has personally pressed for years to get the United States to release Pollard, who is currently serving time in a federal prison in Butner, North Carolina.

The Obama administration considered early release in the spring of 2014 as a sweetener to encourage Israel in an Israeli-Palestinian peace effort, but the idea caused an uproar in the U.S. intelligence community and was quickly dropped.