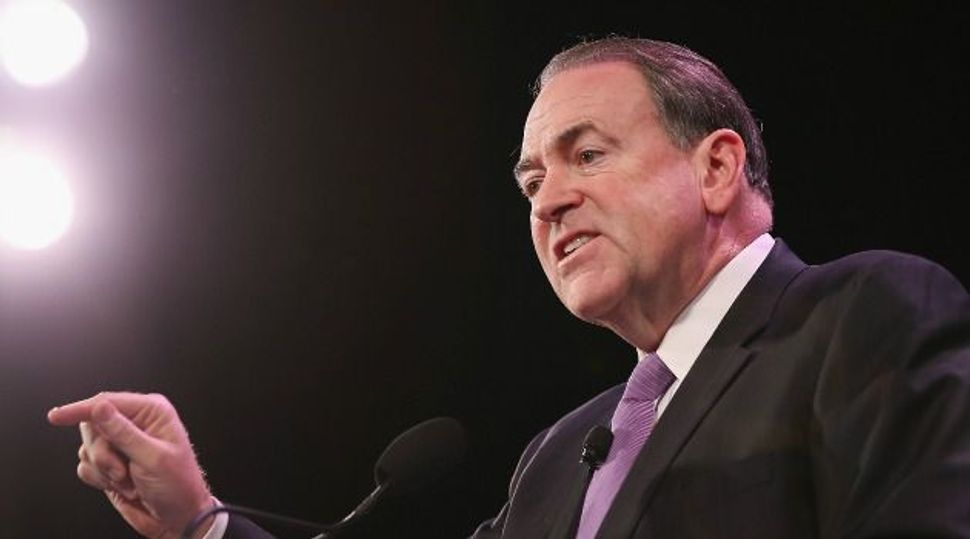 Republican presidential candidate Mike Huckabee drew rare criticism from Israel on Tuesday for comments in which he accused President Barack Obama of marching Israelis “to the door of the oven” in a nuclear deal with Iran.

Israeli Transport Minister Yisrael Katz said on Facebook the former Arkansas governor was “genuinely concerned” about Israel’s future but was wrong to refer to Nazi gas chambers that killed millions of Jews in voicing alarm over the July 14 accord between world powers and Iran.

Israel has called the agreement a threat to its survival and has urged U.S. lawmakers to reject the deal, saying it would give Iran a “sure path” to nuclear weapons.

“That is why we established the State of Israel and the Israel Defense Forces, and if necessary, we will know how to defend ourselves by ourselves,” Katz said.

Ron Dermer, Israel’s ambassador to Washington, said in an interview with USA Today’s Capital Download program that while Israel had a “very serious disagreement” with the Obama administration over the Iranian issue, Huckabee’s remarks were inappropriate.

Huckabee, one of more than a dozen candidates vying for the Republican presidential nomination, made the comments in an interview with a conservative website on Saturday. He has been a regular visitor to Israel, where he has been embraced by right-wing politicians as one their country’s staunchest supporters.

Huckabee on Tuesday dismissed his critics as coming from the left.

Speaking to reporters in Ethiopia on Monday, Obama said Huckabee’s remarks were emblematic of a slide in public discourse coming from the Republicans.

“The particular comments of Mr. Huckabee are, I think, part of just a general pattern that we’ve seen that … would be considered ridiculous if it weren’t so sad,” he said.

Huckabee responded to Obama’s criticism with a critique of the Iran nuclear deal.

“What’s ‘ridiculous and sad’ is that President Obama does not take Iran’s repeated threats seriously,” he said in a written statement. “For decades, Iranian leaders have pledged to ‘destroy,’ ‘annihilate,’ and ‘wipe Israel off the map’ with a ‘big Holocaust.”

The Zionist Organization of America stood by Huckabee’s remarks.

“The ZOA agrees with Governor Huckabee that this Iran deal could lead to a Holocaust-like massacre of the Jews,” the ZOA said in a statement. “In such circumstances, when the Jewish state is threatened with nuclear annihilation, a Holocaust analogy such as Governor Huckabee used is acceptable and not out of place.”