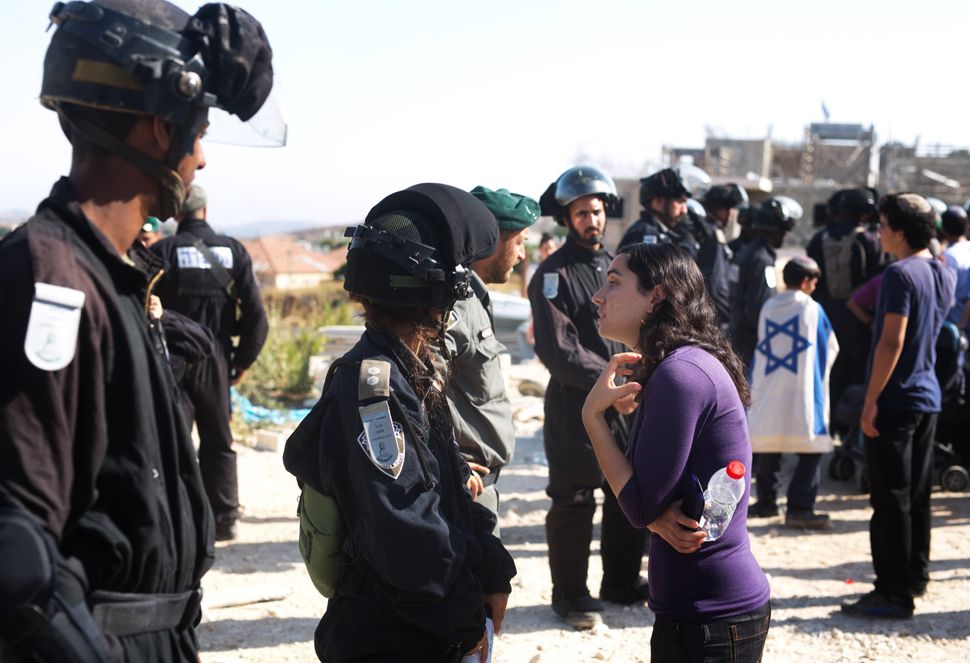 Some 50 demonstrators were arrested, and the rest were dispersed using riot control measures early Tuesday morning.

Police reportedly had arrived in the settlement in the early hours of the morning in an attempt to prevent demonstrators from arriving at the settlement, which is located north of Jerusalem.

The buildings were found to have been constructed on privately constructed Palestinian land and ordered demolished in 2010. Israel’s Supreme Court gave the state until Thursday to demolish the buildings, known as the Dreinoff neighborhood.

The evacuation in Beit El led to a crisis in the government coalition as members of the right-wing Jewish Home party protested the evacuation.

“We’re acting to bolster the settlements, and we’re doing so in accordance with the law,” Prime Minister Benjamin Netanyahu said in a statement following the evacuation. “Our stance regarding the houses in Beit El is clear. We are opposed to demolishing them and are pursuing judicial courses to prevent such a step.”

Members of the Jewish Home Party threatened to bring down the government over the possible demolition. “Ten years on from the disengagement, someone has forgotten that, this time around, the nationalist camp possesses public and political power,” Jewish Home leader Naftali Bennett said in a statement.

Also overnight Tuesday, more than 200 people returned to the northern West Bank village of Sa-Nur, to mark the 10th anniversary of its evacuation during the Gaza disengagement. Many of those who went to the village were families that were kicked out of the settlement.

The demonstrators took over an old British fort located in the village and announced that they are planning to remain.

The Israel Defense Forces on Tuesday warned that it will forcibly remove the demonstrators if they do not leave voluntarily.

Among those occupying the fort are Jewish Home lawmakers Aryeh Eldad and Bezalel Smotrich.

“Ten years after the disengagement, it’s about time to fix things. And that begins here, in northern Samaria,” Smotrich said in a statement. “Families have begun settling into the rooms of the fort with the intention of staying for some time. We don’t intend to move from here.”