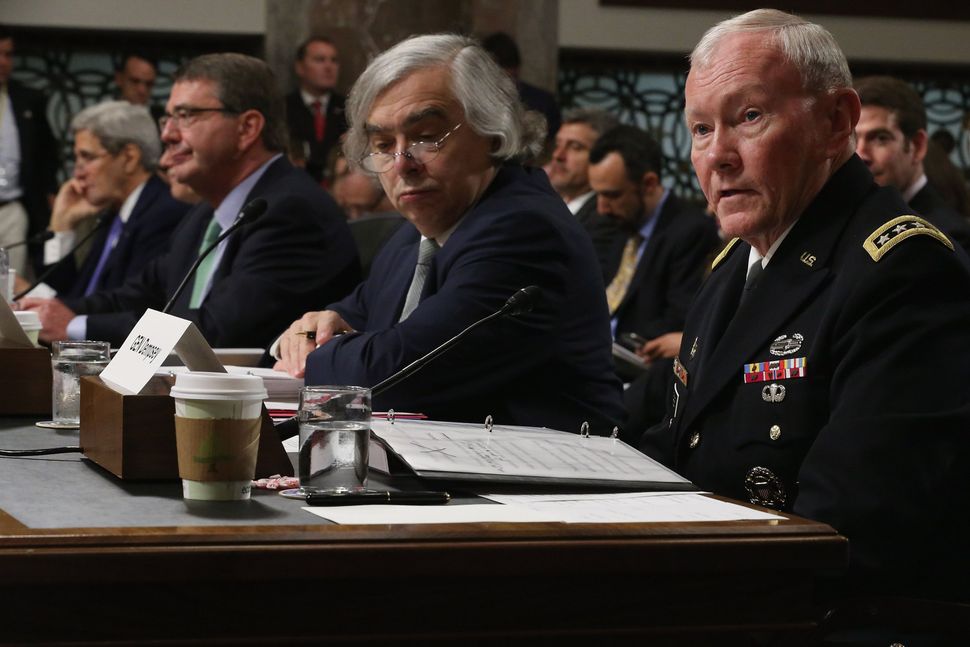 The top U.S. military officer supported a proposed nuclear deal with Iran on Wednesday, saying it reduced the risk of Tehran developing atomic arms while buying time to work with allies to confront the Islamic Republic over other “malign activities.”

Army General Martin Dempsey, chairman of the Joint Chiefs of Staff, told a Senate hearing he had advised the White House to keep sanctions on Iran’s ballistic missile program and arms trafficking for “as long as possible.”

The deal between Iran and the United States, China, Russia, Britain and France would lift the ban on ballistic missile technology for eight years and retain an arms embargo for five.

Members of the Senate Armed Services Committee asked Dempsey how he squared his backing for the deal with his statement to the panel earlier this month that “under no circumstances” should pressure be eased on Iran over ballistic missiles and arms trafficking.

“My recommendation was to keep pressure on Iran on the other malign activities for as long as possible,” Dempsey told the panel. “I will say that I think time works for us as well as Iran … and so with the agreement made and having the opportunity to give my advice, I support it.”

Iran agreed to stop producing highly enriched uranium and submit to U.N. inspections in exchange for an end to international economic sanctions.

The deal would free up $50 billion to $60 billion in Iranian funds frozen in bank accounts in other countries, Lew said.

He said Tehran needed much of that money as foreign reserves to settle purchases made in other countries and it would be “highly exaggerated” to think it all could be used to support militant groups and other “malign purposes” in the Middle East.

Iran supports Hezbollah, Hamas and Houthi rebels in regional conflicts against U.S. partners such as Israel and Yemen.

“There is clearly the opportunity for Iran to use some of the revenue that they gain for malign purposes, and that bears watching and collaboration with our regional partners, including Israel,” Dempsey told the hearing.

He said the deal would reduce the near-term risk of Tehran acquiring nuclear arms but increase the need to strengthen collaboration with partners in the Middle East.