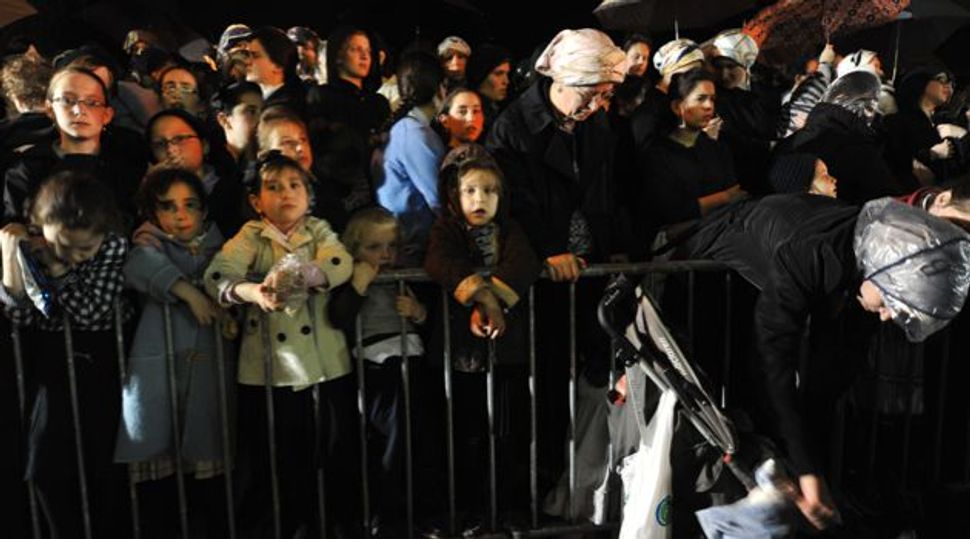 Most schools forbid the use of cellphones by students during class, but in the Hasidic Jewish village of Kiryas Joel, New York, it’s the parents who are being required to power down.

At the end of July, a notice was sent to families in the haredi Orthodox community about 50-miles northwest of New York City detailing strict parental prohibitions on smartphone use as a pre-requisite for their children’s enrollment at the yeshiva.

“Make sure to put your devices in order and send in the filled out rules form for both parents (enclosed) before the above date, in order to avoid inconveniences,” read the announcement, unearthed by Shmarya Rosenberg on his Failed Messiah blog. “Remember: we will not provide acceptance cards if you are not in order with the technological rules.”

The notice went on to list several digital commandments: Men may use a smartphone if deemed essential to business and, in that case, only with an approved filter; women may not use a smartphone, only a basic cellphone. Home computers may not be connected to the Internet. All members of the community must have a stamp of approval from religious leaders on their devices, even “kosher cellphones” that have been inspected by rabbis and whose web browsers have been deactivated.

After detailing the exact devices that each person in the household possesses, and the level of restriction (email only, basic apps, browsing with filter), the parents are required to sign the following affidavit:

“We the parents are confirming in writing that our cellphones/smartphones are in accordance to the rules of the community and yeshiva, according to the guidance of our holy grand rabbi and the judge. We also confirm that we do not possess in our home another cellphone/smartphone except for the ones mentioned above.”

Kiryas Joel was established in the 1970s by members of the haredi Orthodox Satmar Hasidic community who had moved to the region from Brooklyn. The insular village of approximately 22,000 residents has faced numerous legal battles with its neighbors over the years, one making its way to the U.S. Supreme Court in 1994 over the question of whether district boundaries had been unfairly drawn to accommodate a religious population.

In the 2010 census, Kiryas Joel was named the poorest city in the United States, with nearly 70 percent of its population living below the poverty line.

Founded in Romania at the start of the 20th century, the Satmar are considered among the most religiously stringent of the Hasidic sects. They are also one of the fastest growing, with over 100,000 adherents and counting. Committed anti-Zionists, they reject the political state of Israel because it was not established by the messiah.

In creating a self-sufficient and isolated community, the Satmar Hasidim of Kiryas Joel and similar enclaves manage to operate in a world largely untouched by modern temptations. They see technology as a potential puncture to their carefully constructed bubble — the recently released school mandate referred to smartphones as “extremely dangerous.”

Even for a community heavily regulated by religious decrees, the school’s smartphone requirements are notable for threatening punishment of the children (non-enrollment) for the sins of the parents. For those whose parents comply, the new school year begins on August 16.