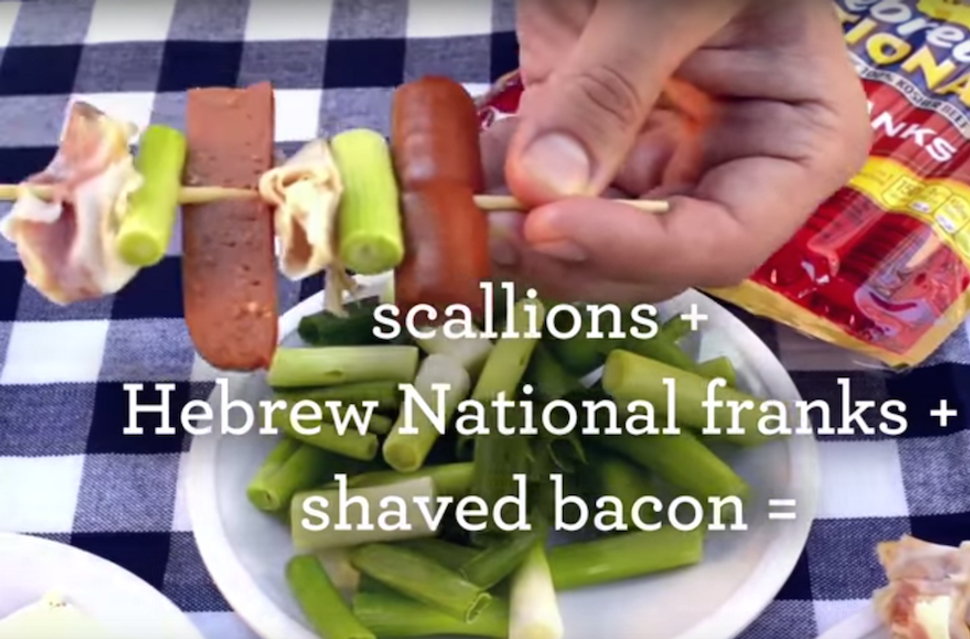 NEW YORK (JTA) – It may be America’s most iconic kosher brand, famous for its hot dogs that in the words of its unforgettable ad slogan, “answer to a higher authority.”

So consumers might be confused to find videos on Hebrew National’s homepage suggesting they grill up their kosher franks with some bacon or halloumi cheese.

Needless to say, bacon isn’t kosher. Neither is a halloumi-hot dog kebab, which violates the prohibition of mixing dairy and meat.

The video is one of several Hebrew National is promoting on its website and in ads running on other sites that feature patently non-kosher, or treif, food. In another video, New York chef David Kirschner prepares a grilled paella dish that combines Hebrew National dogs with mussels and clams (shellfish is also verboten for kosher observers).

For a brand whose reputation is built on its adherence to a “higher authority” than, presumably, USDA requirements, the Hebrew National ad campaign raises the question of whether associating its products with bacon and clams undermines its brand image or its kosher status.

The bulk of Hebrew National’s customers almost certainly are not exclusively kosher (a company spokesman declined to provide any consumer data or sales figures), but its brand is built on its kosher identity.

Dan Skinner, a public relations manager for Hebrew National, told JTA he doesn’t see any problem with the videos, which were produced in partnership with Tasting Table, which produces content for food companies and runs a culinary website.

“Our hot dogs follow very strict kosher standards in terms of the preparation of the hot dogs themselves, and keeping that kosher process is very important to us,” Skinner said. “But our consumers eat the hot dogs for a number of reasons. Some stick to our hot dogs for kosher reasons, and some eat our hot dogs for reasons of taste and preference. For those consumers we have presented recipe options that are not necessarily kosher recipes in the strictest sense.”

Kosher is a fast-growing part of the consumer food market, valued at an estimated $12.5 billion annually by consultants that work with kosher food companies. The vast majority of those who seek to eat kosher do so not for religious reasons but out of concern for food quality, general healthfulness or food safety, a 2009 study by the market research firm Mintel found. Only 14 percent of consumers polled in that survey said they seek out kosher for religious reasons.

Hebrew National is certified kosher by Triangle K, a New York-based outfit run by an Orthodox rabbi, Aryeh Ralbag. He did not respond to telephone messages left at his office and at the Young Israel of Avenue K in Brooklyn, where he serves as spiritual leader; office staff said he is on vacation.

READ: Inside Empire’s slaughterhouse: The life of a kosher chicken

Rabbi Menachem Genack, CEO of the kosher division of the Orthodox Union, wouldn’t comment specifically on the Hebrew National ads, but said that in general there is no inherent problem with companies advertising the use of their kosher products in non-kosher recipes — but there are some exceptions.

“It depends on the context,” Genack said. “A kosher product that’s sold to the general population, if it’s not confusing in any way, that would be OK. If it’s a company that’s selling kosher meat and there’s a real potential for confusion, that would be a problem.”

Granting of O.U. certification is not dependent only on the food, Genack said. The O.U., the largest kosher certifier in the country, does not offer certification to restaurants or caterers that violate the Jewish Sabbath, and it would not certify an establishment whose ambiance does not comport with Orthodox values, such as a strip club, even if the food were strictly kosher. He also noted that the O.U.’s contract with food companies includes a clause that places limits on advertising that might damage the O.U. brand.

“Kosher supervision does not only relate to the kosher food; it’s also the ambiance,” Genack told JTA. “A lot of these things are judgment calls.”

Hebrew National is far from the only kosher brand marketing its products to the general public. Bartenura kosher wines, for example, has been marketing its sweet Moscato wines to African-American consumers for several years after discovering that hip-hop stars were rapping about their affinity for sweet wine. The marketing approach has been a success; the Italian winemaker’s sales have grown precipitously.

But none of Bartenura’s ads compromise the brand’s own kosher bona fides, and Bartenura doesn’t have the word “Hebrew” in its name.

Ironically, though Hebrew National was one of the first companies to advertise its kosher status to the general public – its “higher authority” campaign was launched in 1972 – exclusively kosher consumers commonly eschew Hebrew National meats as insufficiently kosher.

For many years, the problem was lack of confidence in the company’s use of an inhouse rabbinic kosher supervisor – an arrangement critics said created a conflict of interest, since the supervisor could be subject to company pressure. After that rabbi died in early 2004, Hebrew National turned to Triangle K for kosher certification, and a delegation from the Conservative movement’s Rabbinical Assembly visited the facility that year and pronounced Hebrew National’s meats as kosher.

But the company’s products are not glatt kosher – a stricter standard of kosher that has become the baseline in the Orthodox community – and therefore are still avoided by many Orthodox Jews.

In May 2012, a group of consumers filed a class-action lawsuit against Hebrew National’s parent company, ConAgra Foods, alleging that it was not following strict kosher procedures and therefore was improperly advertising its products as kosher. Though the plaintiffs do not themselves keep kosher, they said they were misled into paying a premium price for the product because they believed it adhered to a higher standard.

“It would be unholy, indeed, for this or any other court to substitute its judgment on this purely religious question,” Judge Jerome Abrams of the Dakota County District Court wrote. “At bottom, the ultimate remedy for those who feel they don’t have confidence in the degree of kashrut observed in the production of [Hebrew National] products is not to purchase them.”