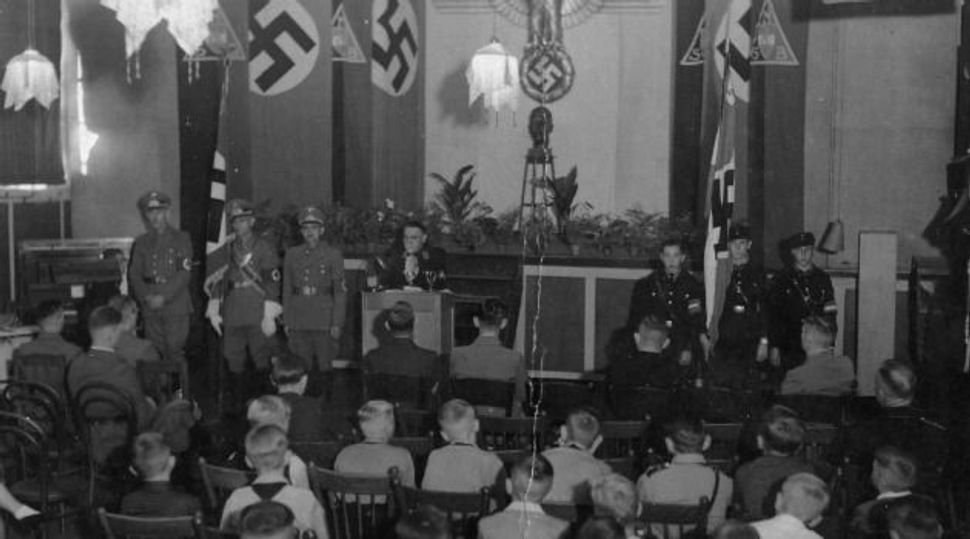 Some Safety: Nazis meeting in Dutch province of Limburg. New research shows the province was the safest place for Jews to be in the Netherlands during the Holocaust. Image by Herman van Rens

Dutch Chief Rabbi Binyomin Jacobs called on the prime minister of the Netherlands to apologize officially for authorities’ collaboration with Nazi Germany in the murder of Jews during the Holocaust.

Weighing in on a polarizing debate over this issue in the kingdom – whose neighbors have all offered such apologies – Jacobs said in an interview with JTA last week that, following expressions of regret of certain army and police units and other institutions, “it is time that the Dutch head of state offer a comprehensive apology.”

Some 75 percent of the 140,000 Jews who lived in the Netherlands before the Holocaust were murdered by German Nazis and their local collaborators in the genocide – the highest death rate in all of Nazi-occupied Western Europe. The Dutch police under Nazi occupation and the national railway company were widely complicit in hunting down Jews and transporting them to death and concentration camps.

At the same time, the Netherlands had a strong resistance movement and has the second-largest number worldwide of Righteous Among the Nations – a designation reserved for non-Jews who were recognized by Israel for risking their lives to save Jews from the Holocaust. The country with the highest number is Poland, which had 30 million citizens and over three million Jews during the Holocaust.

But the large number of Dutch righteous “could simply owe to better documentation of such deeds in the Netherlands compared to elsewhere,” said Jacobs in an interview held ahead of a ceremony this month honoring his 40 years of service of the community.

France, Belgium and Luxembourg officially apologized for their authorities’ part in the systemic annihilation of Jews in statements issued in 1995, 2012 and 2015 respectively.

But the Netherlands under Prime Minister Mark Rutte has resisted calls to also apologize, including by Dutch politician Geert Wilders of the Party for Freedom. Rutte in 2012 cited the absence of “broadly supported counsel from those involved or objective information” that would merit an apology.

A public debate over the issue started with the publication in 2012 of a book by Manfred Gerstenfeld, a Vienna-born Dutch Israeli scholar of anti-Semitism, titled “Judging The Netherlands: The Renewed Holocaust Restitution Process.”