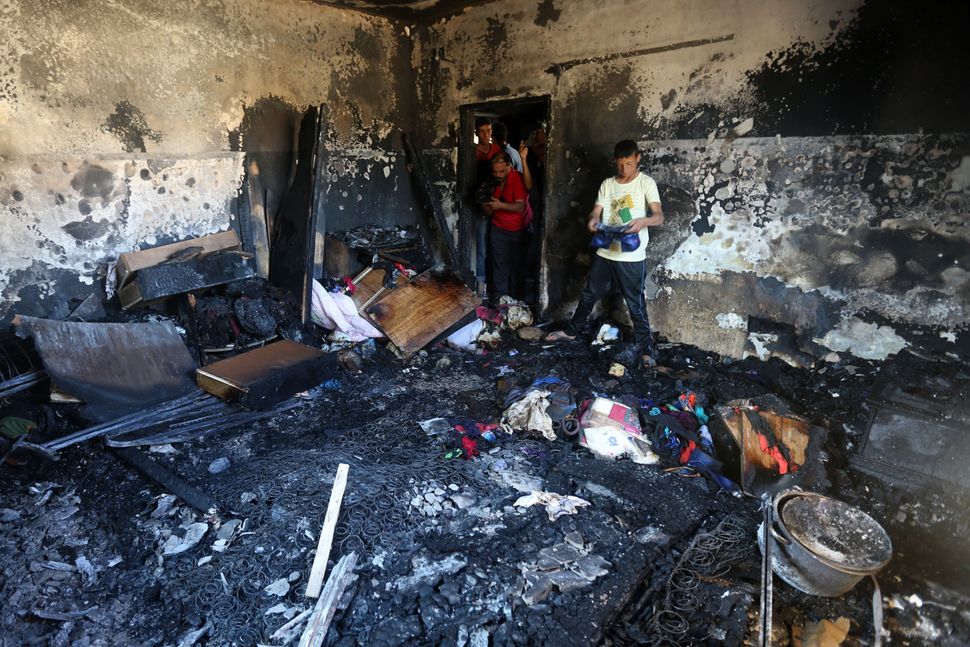 Armed men stopping cars at checkpoints in the West Bank are usually Israeli security forces policing the occupied territory, but in some areas they are Palestinian civilians patrolling their own villages.

Fears of attacks by far-right Jews have increased since a Palestinian man and his 18-month-old son were killed when their house in Duma village was set ablaze on July 31, giving the farmers-turned-volunteer watchmen a renewed sense of urgency.

“They used to break glass, damage houses, and torch the mosque and vehicles,” said Abed al-Atheim Adi, mayor of the village of Qusra where locals have been patrolling the streets at night since 2001.

“The youths in the village formed teams to defend the rights of their children and families and provide more protection at night,” said Adi.

Reuters accompanied a patrol in Qusra this week. Watchmen, some of whom were masked, carried cudgels and a pick-axe as weapons and used a flashlight to peer into the dark fields on the thorny plains near the city of Nablus.

They had no guns, perhaps fearing crackdowns by the Israeli army, which, under interim peace deals that set up the self-ruling Palestinian Authority (PA) in the 1990s, has overall responsibility for security in the area.

In a nearby village, Turmus Ayya, residents sometimes set up checkpoints on the access road at night, where they question motorists and search their vehicles.

“The number of the team members can be seven, 17 or 40, depending on who is free,” Adi said. “These teams don’t get support or funding from anyone. The Palestinian Authority promised to provide support, but nothing has happened.”

If an intruder is spotted, the watchmen phone the village imam, who summons reinforcements over the mosque loudspeakers.

Qusra was the scene of a run-in with a group of Jewish settlers in January 2014. Accusing the Israelis of throwing rocks at them, villagers detained and beat them before handing them over to the Israeli army. A representative of the neighboring Jewish settlement of Esh Kodesh disputed the Palestinians’ account, saying the Israelis were set upon while on a hike in the area.

Among the settlers involved was Meir Ettinger, a far-right Jewish activist who, following the Duma arson, has been jailed without trial by Israeli authorities scrambling to stem what they fear is a surge in hate crimes.

An Israeli military spokesman had no immediate comment on the self-defense patrols. One Israeli army general, speaking to Reuters on condition of anonymity, voiced cautious sympathy for the villagers but also concern about possible unanticipated flare-ups.

“Our special forces often carry out counter-terrorism operations in the area, sometimes in plainclothes disguises. What happens if these self-defense groups mistake them for vandals? It’s a recipe for escalation,” the general said.

Adi voiced confidence in the restraint of the Qusra watchmen.

“In the last four years they haven’t experienced any mistakes, and the minute they see the (Israeli) army operating in the village the team members stay home,” he said.

The village vigilantes pose a dilemma for the Palestinian Authority, which coordinates West Bank security with Israel.

“These (self-defense) teams in the West Bank have so far received no support from the PA, but I hope that the PA will soon make a decision to support them,” Ghassan Daghlas, the authority official who monitors settlement activity in the Nablus area, told Reuters.