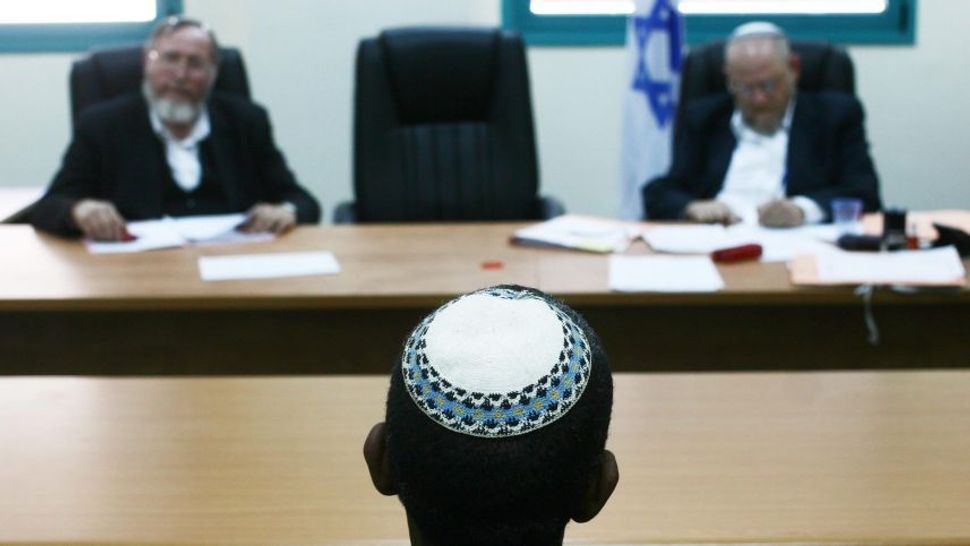 Six young people were converted to Judaism by a rebel religious court on Monday. The small group of Orthodox rabbis who sat on the beit din and supported the act, led by rabbis David Stav and Nahum Rabinowitz, are all veteran pulpit rabbis and the heads of respected yeshivas. Their defiance of Israel’s Chief Rabbinate and the entire Orthodox rabbinical hierarchy could signal the most significant split in Orthodox Jewry in centuries.

The rebel rabbis acted in strict adherence to rabbinical law, or halakha. All they did was to defy the strictures added on by ultra-Orthodox rabbis in recent decades, which require a far more stringent degree of religious observance from prospective converts. In doing so, however, the rebels challenged the entire structure of Jewish orthodoxy in Israel, whereby the ultra-Orthodox leaders set the standards, which are then enforced by the state’s Chief Rabbinate.

With the exception of the independent-minded Shlomo Goren, who was Israel’s Ashkenazi chief rabbi from 1973 to 1983, no one has dared to blatantly challenge the ultra-Orthodox on one of the most cardinal issues of Jewish law. It is tantamount to starting a civil war in the heart of rabbinical Judaism.

Why does this matter? After all, Orthodox Jews are a relatively small minority of the world’s Jewish population. While prospective converts can go down the Reform or Conservative route, and many do, an Orthodox conversion carries the benefit of being fully recognized by the Israeli government for all purposes, from claiming citizenship under the Law of Return to having the right to marry in Israel. With the Israeli political balance unlikely to change in the foreseeable future, wider recognition of Reform and Conservative conversions and of locally-performed civil marriages is highly unlikely.

The inordinate power wielded by Israel’s Orthodox rabbinate as the gatekeeper of official Jewish-Israeli identity has allowed them to enforce stringent standards on more liberal-minded Orthodox rabbis and conversion courts throughout the Diaspora, including the Rabbinical Council of America. The challenge to the rabbinate’s hegemony by senior Orthodox rabbis within the Israeli establishment will make it much easier for rabbis abroad to do the same.

The rebel rabbis’ move has personal implications for many non-Orthodox Jews. These include, of course, an estimated 350,000 Israelis who immigrated from the former Soviet Union, only to discover that according to Orthodox religious law they were non-Jews, and therefore not allowed to marry in Israel. It will also give non-Jewish spouses in mixed marriages and any non-Jewish children in these families friendlier conversion options, in the event they wish to eventually immigrate to Israel as Jews.

There is a further knock-on effect of the rabbis’ rebellion. The rabbinate controls not only conversion, but also marriage and divorce. The new converts may one day wish to marry under a chuppah. That means the rabbinate will be forced either to recognize the rebel conversions retroactively or to disallow them to marry in Israel. The next step after alternative conversions is alternative Orthodox marriages, perhaps even an alternative divorce court. But it won’t stop there; indeed, it doesn’t stop there now.

A split on the cardinal halakhic issues of conversion and personal status also lends legitimacy to other widening cracks within Orthodox Judaism, over the role of women in synagogue ritual and the ordination of women as Orthodox rabbis, the acceptance of openly gay members in religious communities, alternative kashrut supervision for restaurants and the legitimacy of academic research in Torah study. The rabbis now challenging the rabbinate over conversion do not necessarily support the more liberal wings of Orthodoxy on any of these issues, but the unintended consequence of their rebellion will be to strengthen those wings and perhaps bring about a schism. Since it is still by far the dominant stream in Israeli religious life, the only one that most nonreligious Israelis know — despite the efforts of the local branches of the Reform and Conservative movements — the social impact of a more inclusive Orthodox Judaism will be felt beyond that community.

One irony of this latest development is that while most of the rebel rabbis are West Bank settlers and staunchly right-wing, they are breaking with the rabbinate due to the decision of Israel’s right-wing government last month to cancel the previous government’s plans to reform the conversion process.

This weakens Habayit Hayehudi, the descendant of the National Religious Party, whose members are split over the issue. It also weakens the religious leadership of the settler movement, as many other settler rabbis are much closer in spirit to their ultra-Orthodox colleagues. This exacerbates another growing divide between the rabbis who will, albeit with great sadness, accept a future decision by an Israeli government to retreat from parts of the West Bank and dismantle settlements, and those rabbis who will refuse to recognize such a decision as legitimate and will call for active, perhaps even violent, resistance. (In that event, it will be the current rebels who will be calling for moderation for the sake of national unity.)

While the ultra-Orthodox rabbis and their political representatives in the Shas and United Torah Judaism parties are united in their adamant opposition to any concessions on conversion, the timing of this row is very unfortunate for them. After two years in the opposition, Shas and UTJ have their hands full trying to roll back legislation on issues such as the conscription of yeshiva students and restoring subsidies and funding to their previous levels.

The deaths of senior rabbis such as Ovadia Yosef and Yosef Shalom Elyashiv have not led to the emergence of a new leadership of vigorous and charismatic rabbis capable of commanding widespread authority and rallying the entire community. There is no joint policy on how to respond to the growing numbers of young Haredi men and women seeking vocational training and academic degrees that will allow them to join the workforce. Neither have they found a way to counter the alluring influence of the Internet, which has seeped through the cracks of the self-imposed ghetto walls.

Never since Israel’s founding in 1948 has the Orthodox rabbinical leadership been so weak, so powerless to prevent civil war within its ranks. This war has the potential to change the face of Judaism for generations.