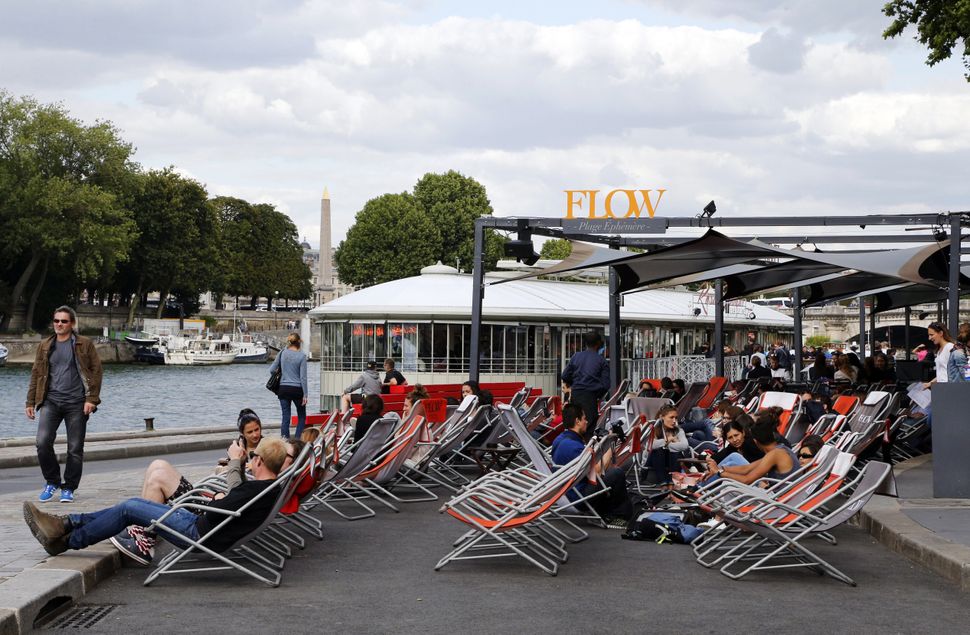 Hundreds of police deployed in the heart of Paris on Thursday to monitor a celebration of Tel Aviv and a nearby rally against it staged by pro-Gaza demonstrators during a beach festival on the banks of the Seine river.

Paris’ decision to fete the Israeli city as “Tel Aviv on Seine” for a day sparked a spat online and among politicians in a country where, with Europe’s largest Jewish and Muslim communities, sensitivities to Middle East conflict run high.

For its supporters, the official event was about dialog between cultures and celebrating famously freewheeling Tel Aviv.

Critics branded the beach celebration “indecent” after the death of a Palestinian baby in an arson attack in the Israeli-occupied West Bank at the end of July. A year ago, Israeli forces devastated parts of the Gaza Strip during a two-month war with Palestinian Hamas militants who rule the territory.

But both the Tel Aviv and Gaza events, which were set to run until 10 p.m. (2000 GMT), unfolded largely peacefully to the sound of DJs and beach ping-pong. What was meant to be a festive event, however, was largely about geopolitics, with visitors saying they were there with a message.

“I want to show that I won’t be told what to do,” said Odile Gaudin, who came with her daughter. She was referring to calls by some left-wing French politicians for the Tel Aviv event to be canceled or boycotted.

“I am really sorry that today in Paris we can’t do an event that promotes the culture of Tel Aviv without it causing such a harsh and violent controversy,” said Nicolas Woloszko, the treasurer of Jewish students union UEJF.

A few meters (yards) away, on another small sandy stretch of the riverbank, pro-Palestinian activists sporting “Free Palestine” or “Boycott Israel” T-shirts staged a rival “Gaza on Seine” gathering.

“This (Tel Aviv on Seine festival) is part of Israeli propaganda to try and show an Israel that is different from the bombs, soldiers, checkpoints,” said Nicolas Shahshahani, vice-president of the CAPJPO EuroPalestine Association.

About 100 demonstrators later assembled in the street above Paris’ urban beach, chanting “Gaza, Gaza, Paris is with you.”

There was a brief scuffle when police pushed aside some demonstrators who sat down on the road to block traffic.