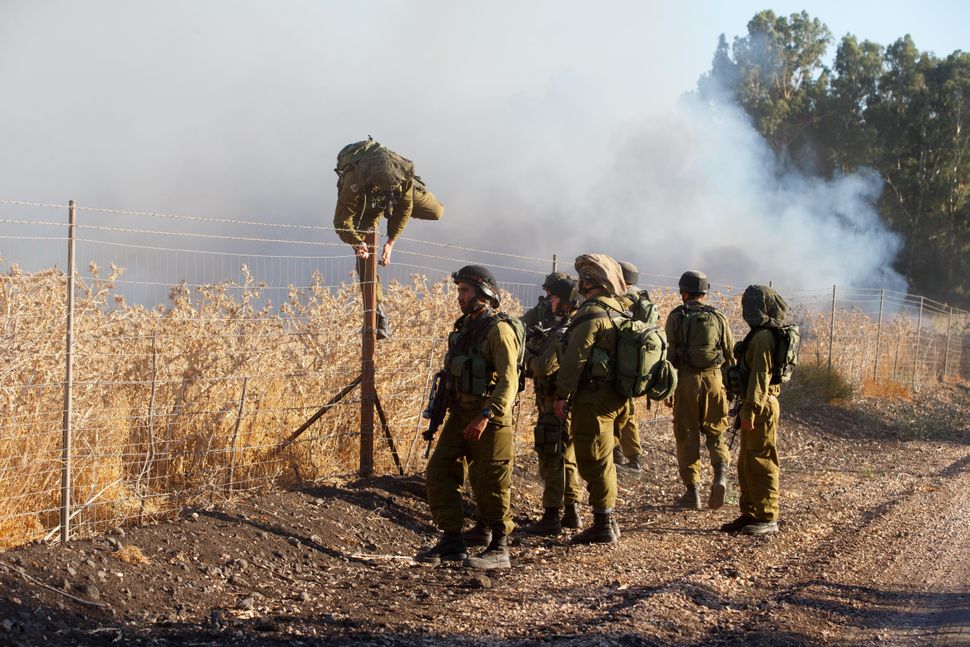 Israel said it killed at least five Palestinian militants in an air strike on the Syrian Golan Heights on Friday, after cross-border rocket fire from Syria prompted the heaviest Israeli bombardment since the start of Syria’s four-year-old civil war.

A Syrian army source said the strike, at 10.30 am (0730 GMT), hit a car in a village in the Syrian Golan Heights, killing five civilians. State television quoted the source as saying it took place near Quneitra, close to the Israeli-occupied section of the Golan region.

It followed heavy overnight strikes by Israel against Syrian army posts in the border area in retaliation for what Israel said were rockets fired from Syria by Islamic Jihad.

The rockets landed near an Israeli village, setting off fires but causing no casualties.

Islamic Jihad denied it was involved.

Asked to respond to Israel’s account, senior Islamic Jihad official Mohammad Al-Hindi stopped short of confirming members of the group had been hit, telling reporters in Gaza: “If the reports are corrent, Islamic Jihad knows how to defend its men.”

Israel’s overnight retaliation killed one Syrian soldier and wounded seven, the Syrian army source said, although it appeared to be the heaviest Israeli bombardment for years, with dozens of raids against Syrian targets.

Israeli Prime Minister Benjamin Netanyahu said Israeli forces “struck the squad that carried out the firing and the Syrian forces that enabled it to.”

He also blamed Iran for ordering the rocket fire into Israel, underlining Israel’s concern that a nuclear deal between Tehran and six world powers had emboldened the Islamic Republic.

“Those countries hastening to embrace Iran should know that an Iranian commander gave sponsorship and instruction to the squad that fired on Israel,” he said in a statement.

A British-based monitor and defense experts who track Syria said the Israeli raids on Thursday were the heaviest attacks on Syrian army targets since the start of Syria’s crisis in 2011.

Israeli media said the overnight exchange was the first shelling of Israeli targets from Syria since a 1973 Middle East war, and the most intensive Israeli shelling of Syria since then as well.

Israeli Defence Minister Moshe Yaalon said the rocket fire from Syria was a result of a more aggressive Iranian policy following the nuclear deal signed between Tehran and the West, and he challenged Tehran not to test “our determination.”

“What we’ve seen overnight is the prelude of things to come, following the signing of the nuclear agreement and the lifting of sanctions,” Yaalon said.

Israel, widely believed to hold the region’s only nuclear arsenal, resolutely opposes the nuclear accord, saying Tehran is determined to acquire its own nuclear weapons and will also now have more access to funds to spread its influence in the region.

Israel captured the western Golan in the 1967 Middle East war and annexed it, a move not recognized internationally.

Lebanese Hezbollah’s Manar television said the Israeli raids targeted Brigade 90, one of the biggest Syrian army bases in the country with several rockets

The Syrian army, which has been on a war footing with Israel for decades, had deployed a substantial part of its land forces and artillery in southern Syria and in the Golan Heights and built elaborate defenses against Israel.

Rebel sources said at least 50 raids hit the main army outposts in the region including an attack on the city of Baath, the administrative capital of the Quneitra region.

Many parts of the Syrian Golan Heights have fallen under rebel control, with groups including the Syrian al Qaeda offshoot, Nusra Front, having a strong presence in the area.

A major Syrian offensive helped by Iran-backed Hezbollah to wrest back territory had failed to make inroads.