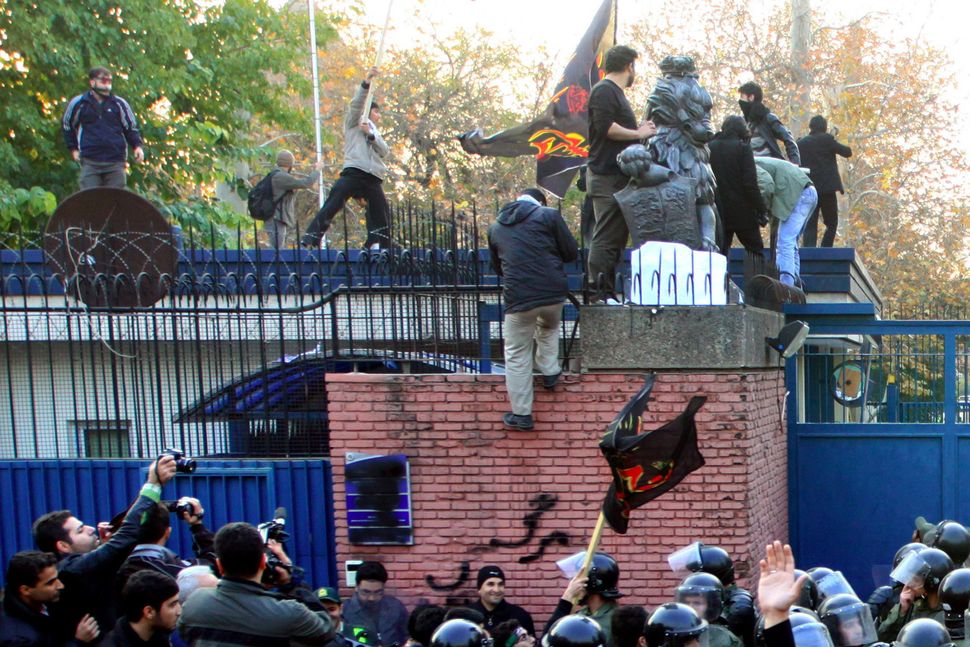 Britain reopened its embassy in Tehran on Sunday, a striking signal of how Western ties with Iran have thawed since protesters ransacked the ambassador’s residence and burned the Union Jack nearly four years ago.

Foreign Secretary Philip Hammond watched the British flag being raised in the garden of the opulent 19th century building while the national anthem played.

“Today’s ceremony marks the end of one phase in the relationship between our two countries and the start of a new one – one that I believe offers the promise of better,” he said.

The attack that forced the embassy to close was a low point in diplomacy between the two countries, he said, but the relationship had improved “step by step” since the election of Iranian President Hassan Rouhani in 2013.

The agreement prompted a flurry of European visits – including from German and French ministers – aimed at positioning for the end of Iran’s long economic isolation.

Britain had operated without an embassy since Iranian protesters stormed its two main diplomatic compounds in Tehran on Nov. 29, 2011. The protesters slashed portraits of British monarchs, torched a car and stole electronic equipment.

Graffiti reading “Death to England” still adorns the doors to a grand reception room in memory of the storming.

Prime Minister David Cameron called the attack a ‘disgrace’, closed Britain’s embassy and expelled Iran’s diplomats from London. Iran will simultaneously re-open its embassy in London on Sunday and both will initially be run by chargé d’affaires but ambassadors will be agreed within months, Hammond said.

He is only the second British foreign minister to visit Iran since the 1979 Islamic revolution that toppled the U.S.-backed shah. The last visit was by Jack Straw in 2003.

“RETURN OF THE FOX”?

After more than a decade of casting the Islamic Republic as a rogue power seeking to sow turmoil through the Middle East, Britain has sought to improve ties with Iran, whose proven natural gas reserves are as vast as Russia’s.

“In the first instance, we will want to ensure that the nuclear agreement is a success, including by encouraging trade and investment once sanctions are lifted,” Hammond said.

Under the nuclear deal, sanctions imposed by the United States, European Union and United Nations will be lifted in exchange for Iran agreeing long-term curbs on a nuclear program the West suspected was intended to make a nuclear bomb. Tehran has always denied seeking nuclear arms.

“This is a vast emerging market to open up, a vast frontier market: Iran is potentially something of an energy superpower,” Norman Lamont, a former British finance minister who now chairs the British Iranian Chamber of Commerce, told Reuters.

“But it is also necessary to be cautious because we do not know quite what American sanctions will remain.”

While the nuclear deal is seen as a major opportunity by some, including U.S. President Barack Obama, hardliners in Washington and Tehran have opposed it, as has Israel.

Deep mistrust remains on both sides.

Britain has been cast for decades by opponents inside Iran as a perfidious “Old Fox” or “Little Satan” who does the bidding of “Big Satan,” the United States.

An electronic newsletter of the Fars news agency cast the reported re-opening of the embassy as the “Return of the Fox.”

Britain’s embassy in Tehran – built as a symbol of imperial might when Britain was locked into the ‘Great Game’ struggle for influence with swiftly expanding Tsarist Russia – has long been the subject of intrigue.

Following the 2011 storming, which was a protest against nuclear-related sanctions imposed by London, Iranian Supreme Leader Ayatollah Ali Khamenei called it an “evil embassy.”

In 2007, Iranian media even claimed to have discovered a secret tunnel running from the embassy under a carpet shop which was used to smuggle “spies and prostitutes.”

Protesters in 2011 smashed the large stone lion and unicorn on the gates at the ambassadorial residence, where in 1943 a dinner was held for Winston Churchill, Joseph Stalin and Franklin D. Roosevelt — the first meeting between the leaders of Britain, Russia and the United States to discuss their strategy for winning World War Two.

Protesters also looted the embassy and smashed some treasures. A portrait of Queen Victoria was torn in two, the head was cut out of a portrait of Edward VII and a picture of Queen Elizabeth was stolen.

There has been no U.S. embassy in Tehran since it was sacked in the early days of the Islamic Revolution in 1979 by students who feared a repeat of a 1953 coup when the CIA orchestrated the overthrow of Prime Minister Mohammad Mossadegh.

The U.S. hostage crisis lasted 444 days and Washington and Tehran have never resumed diplomatic relations, leaving Britain first in line for the anti-Western feelings of the hardliners who run the Islamic Republic and their supporters.