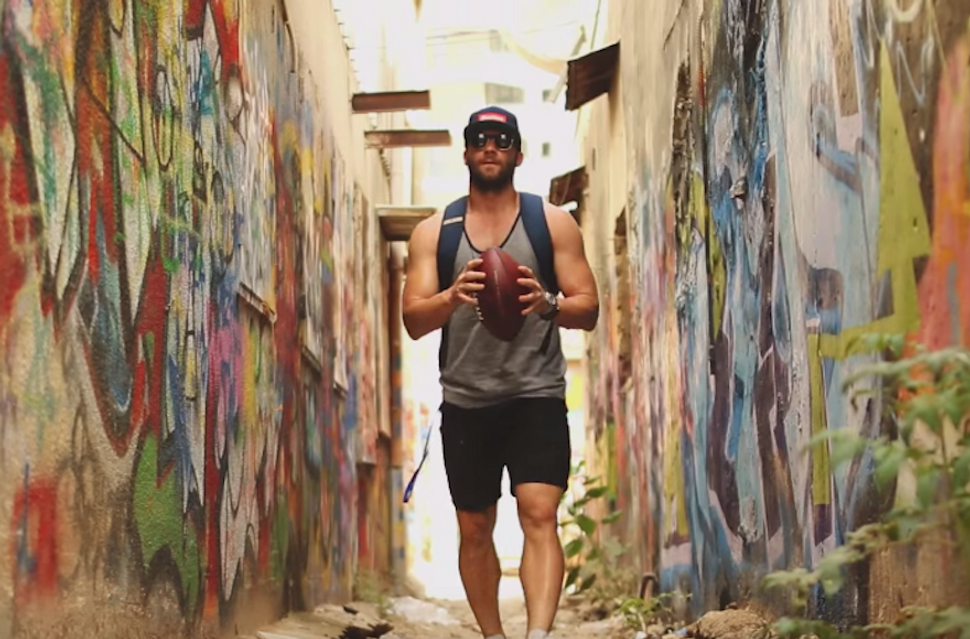 (JTA) — Ever since New England Patriots wide receiver Julian Edelman’s breakout performance in the Super Bowl last February, football fans have wondered whether they could proudly count him as a member of the tribe.

His latest trip to Israel certainly helps them make the case. Few NFL players have so outwardly identified with the Jewish people.

At the end of June, Edelman spent ten days in Israel with representatives of the Combined Jewish Philanthropies of Greater Boston and a group of Boston-area young adults. The exploration of his Jewish heritage involved “participating in lots of…quintessentially Israeli experiences,” according to a CJP press release.

Edelman’s marketing company Superdigital – which has helped him create an impressive social media presence, even by the high standards of professional athletes – filmed the journey.

“Exploring my heritage is something I started in the past few years and seeing Israel for the first time, really getting a sense of its history and culture – I now truly understand why it’s so special,” Edelman said in the press release.

The main montage video and a series of shorter clips lets fans watch Edelman pray at the Western Wall, discuss the City of David in Jerusalem, get a haircut in the desert, find a T-shirt that says “Super Jew” and shout the phrase “Yalla!” repeatedly (the term, which is Arabic and Hebrew for “Let’s go,” was the figurative theme of Edelman’s trip).

According to the CJP, Edelman’s trip also included praying with tefillin, sailing in the Sea of Galilee, swimming in the Dead Sea, riding a Jeep through the Negev Desert, playing football with Israel’s national team and getting a tour of Tel Aviv’s notable graffiti art. He passed through Tel Aviv, Haifa, Jerusalem and the Negev region.

Maybe it’s not a coincidence after all that Edelman’s signature JEII logo – a combination of his initials and his jersey number – looks a lot like the word “Jew.”