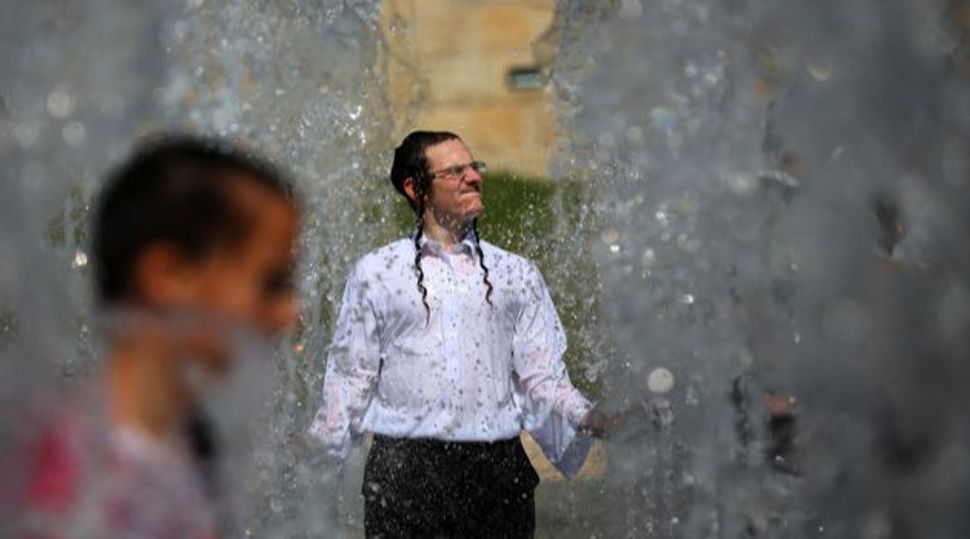 Water Park: An Orthodox man cools off in a Jerusalem fountain. Image by Getty Images

(JTA) — Did we need the Pew Research Center to tell us American haredim are different than other Jews? It’s no surprise that American haredi Orthodox Jews marry young, have big families, care more about religion and skew further right politically than the rest of the American Jewish community.

But when compared with similar data from Israel, Pew’s “Portrait of American Orthodox Jews,” released Wednesday, did illuminate another gap — not between Orthodox and secular, but between haredi Jews from global Jewry’s two poles: Israel and America.

In a few obvious ways, American and Israeli haredi Jews are much alike. Both communities believe in God and keep traditional Jewish law, or halacha. They both have high birthrates and younger populations. They both largely send their kids to religious schools.

Beyond that, though, they begin to diverge. America’s haredim are richer, more educated and more politically conservative than their Israeli counterparts.

Israeli haredim are poor. American haredim, not so much. Haredim aren’t only Israel’s most religious community; they’re also its poorest. According to the Taub Center for Social Policy Studies, haredim have the lowest average household income of any sector in Israeli society, at approximately $2,500 per month.

That’s largely because Israeli haredim have a low employment rate, with many young men opting to study full-time in yeshiva rather than work — though that trend is changing. Haredi Americans work at higher rates, and it shows in their bank accounts.

More American haredim get advanced degrees than Israeli haredim. Israel has one of the highest college attendance rates in the world, but its haredi community is among its least educated. As of 2012, according to Taub, 47 percent of haredim had only a primary school education. And only approximately 15 percent had a bachelor’s or graduate degree.

Israeli haredim are less right-wing politically — on some issues. Haredi political parties in Israel are famous — or perhaps infamous — for being socially conservative on issues like marriage, Jewish conversion and gay rights. On those issues, to the extent they’re political issues in America, the two haredi communities might agree.

But Israeli haredi politicians have been agnostic on questions of diplomacy and defense — and decidedly pro-big government when it comes to social services. Shas, the Sephardi haredi party, ran an election campaign this year calling for raising taxes on the rich, increasing the minimum wage and providing more funding for public housing.

In terms of the size of government, American haredim fall on the other end of the spectrum. According to Pew, 57 percent of them “prefer smaller government with fewer services.”

In that sense, Israeli haredim match up better with Reform American Jews, only a third of whom want smaller government. Just don’t tell that to Israeli Religious Services Minister David Azoulay.