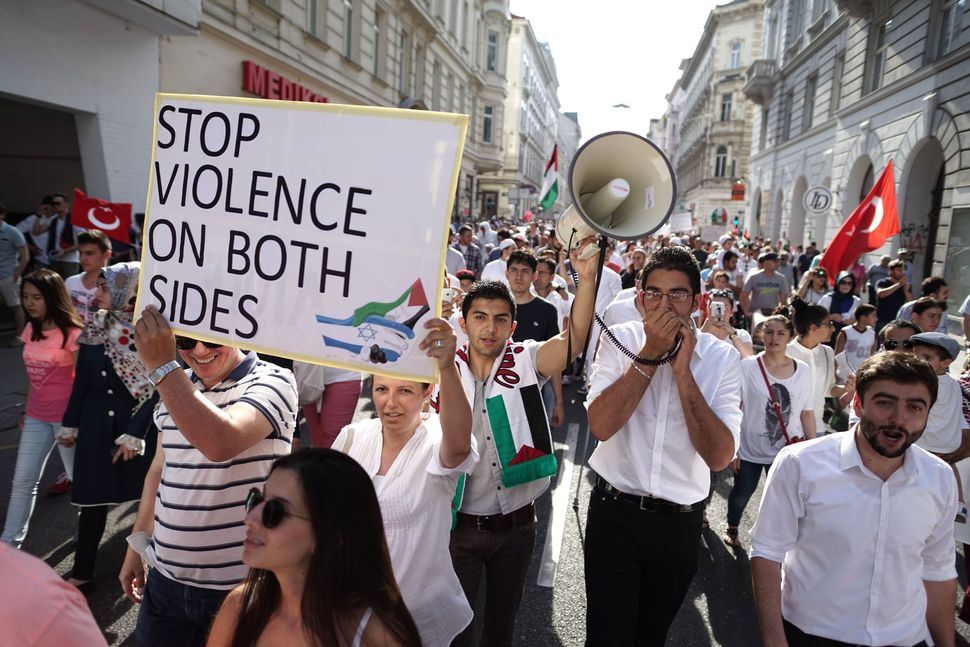 The incitement took the form of a caricature published last month on the Facebook page of organizers of the Vienna march of International Quds Day — an annual event held in cities across the world since it was initiated in Iran as an expression of solidarity with Palestinians and rejection of Zionism and Israel.

The caricature showed men wearing Middle Eastern garb and one child pouring water into a hole, at the bottom of which stands a worried-looking, drowning Orthodox Jew holding an Israeli flag. The caricature contained a Turkish-language quote attributed to Ruhollah Khomeini, the late spiritual leader of the Islamic Revolution in Iran: “If every Muslims poured a glass of water on Israel, it would drown.”

The organizers of the march on July 11 removed the caricature after the Jewish Community of Vienna complained about it in Austrian media. Politicians from across the spectrum condemned the caricature as anti-Semitic and several parties filed a criminal complaint for incitement, but the Vienna Prosecutor’s Office recently decided to close the case without charging anyone.

The cartoon “was not directed against a group of people and constitutes no [criminal] offense,” the prosecutors said, according to a statement published last week on the community’s website.

“This line of argumentation and approach by the prosecutor is unfortunately not an isolated case,” the community’s president, Oskar Deutsch, wrote in a statement titled “the Vienna Prosecutor’s Office is ignoring anti-Semitic incitement.” The Jewish Community called on justice authorities to order the prosecutor’s office to investigate anyway.

Earlier this week, the community’s website reprinted an op-ed titled “The incitement caricature must not remain unpunished” by DI Birol Kilic, chairman of the Vienna-based Turkish Culture Council.

The “clerical Fascist cartoon,” he wrote, “should raise alarm bells” in Vienna, where “Theodor Herzl and Adolf Hitler lived and realized, through their experiences in Vienna, their dreams outside of Vienna.”