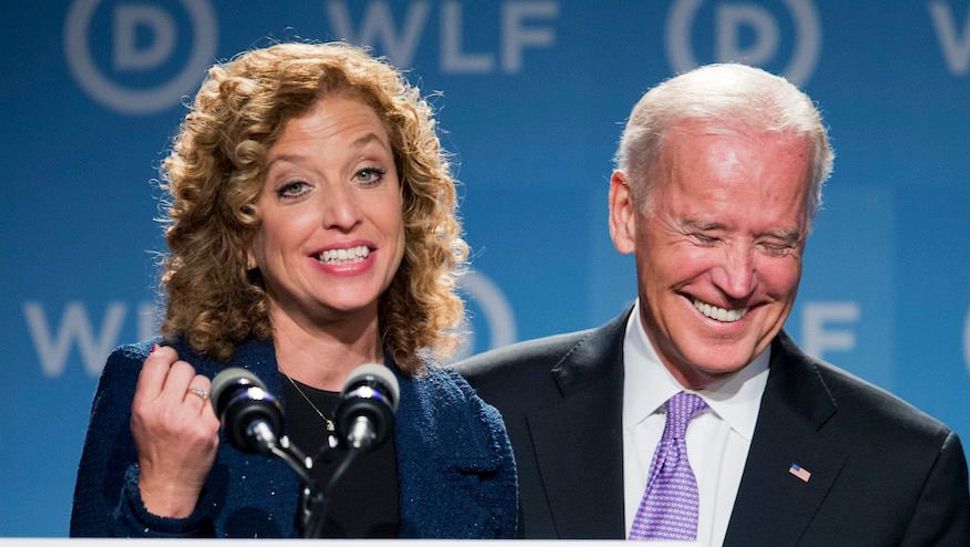 (JTA) — At the 2008 Democratic National Convention in Denver, Rep. Debbie Wasserman Schultz, D-Fla., arrived for a breakfast meeting with Jewish reporters in an upbeat mood.

Wasserman Schultz had backed Hillary Rodham Clinton in the primaries, and Barack Obama was now the nominee, but she had reason for a sunny outlook: Joe Biden was the vice presidential nominee.

“He’s like mishpokhe!” she told me at the time, explaining that she had known him since 1987, when she backed his primary run as a Student for Biden — until it imploded.

Biden’s closeness to the Jewish community made him perfect for stumping for the Jewish vote in her home state, she said. “He’ll come down and move around the bagel places and the condos,” she told me. “It’ll be like a son.”

Biden and Wasserman Schultz were back in South Florida again Thursday, but this time, there was baggage.

Biden was pitching the Iran nuclear deal to the Jewish community, and Wasserman Schultz is under intense scrutiny as she has yet to declare whether or not she backs it.

Not only is she one of her caucus’ most prominent and senior Jewish members, she is chairwoman of the Democratic National Committee. She reportedly blocked a recent pro-deal resolution in the DNC and subsequently came under fire for it.

The Hill suggested that Wasserman Schultz’ DNC position is in peril because of anger among non-frontrunners over her limiting of presidential debates to six candidates, and that an anti-deal decision could push her over the edge.

The Sun-Sentinel reported that Wasserman Schultz still loves Joe (He’s a “mensch”), but that she remains undecided on the Iran deal. According to Roll Call, she said, “This is a decision not only to be made based on your head but one that will be made with my Jewish heart, and that is equally important to me.”

Politico wondered about how Wasserman Schultz would weather a Biden-Clinton fight, should the vice president step into the primaries. (Biden, incidentally, chose an Atlanta shul to speak candidly for the first time about whether he is considering a run. He alluded to the recent death of his son, Beau Biden, and sounded wary: “The honest to God answer is, I don’t know,” he said at Ahavath Achim last night. “The most relevant factor in my decision is whether my family and I have the emotional energy to run.”)

The Free Beacon reminded us that Wasserman Schultz is not the only Florida Jewish Democrat agonizing: Rep. Alan Grayson, running for Senate, is also in a tough place. He told Al Jazeera America: “I don’t think that the deal will bring about the peace that we were hoping to see between Iran and its neighbors. It does nothing to address terrorism support by Iran for militant groups around the area, involvement in what amounts to the Shi’i-Sunni civil war that’s raging from the Middle East.” Still, he remains undecided.