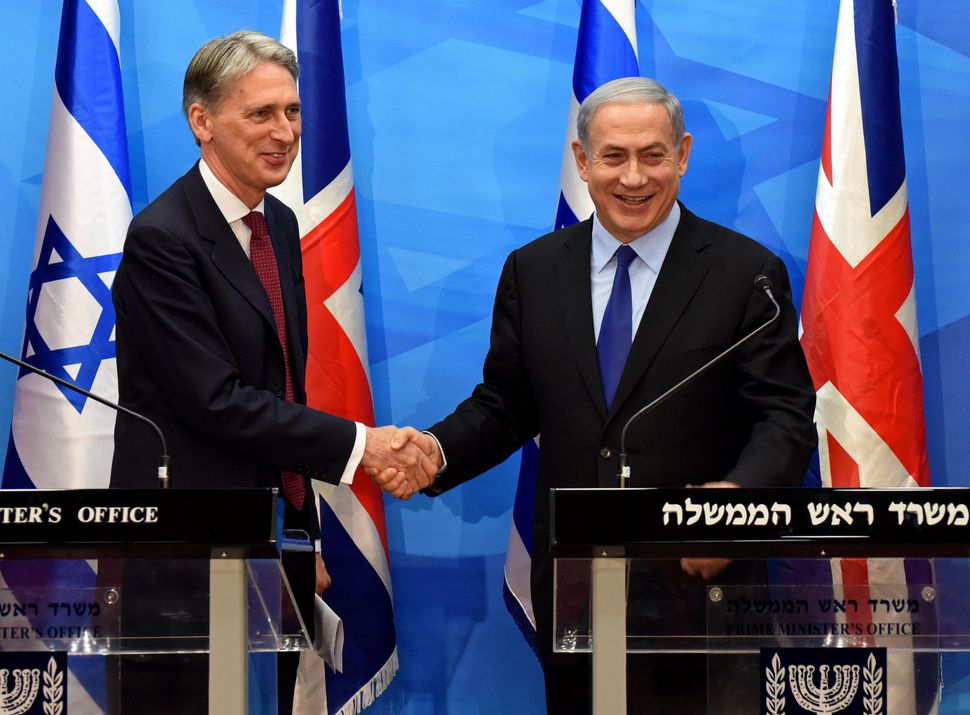 Europe should see Israel as a partner in confronting the “mediaevalism” of militant Islam rather than criticizing it for its policy towards the Palestinians, Prime Minister Benjamin Netanyahu said ahead of a visit to Britain on Wednesday.

Speaking after meeting European Council President Donald Tusk and before flying to London for talks with David Cameron, Netanyahu said Israel, like Europe, was under threat from violent Islam and the two needed to stand together.

“We’re challenged by the opposite of modernity, which is a barbaric mediaevalism, early mediaevalism, primitive, savage, murderous, that comes from the two sources of militant Islam,” he said, referring to Sunnis and Shi’ites.

“Europe should support Israel – not pressure Israel, not attack Israel, but support Israel, which is the only real shield that Europe and the Middle East have against extremist Islam, which is surging,” he told reporters.

The comments appeared to be an attempt to shift the focus of discussion away from the frequent talk of Israel’s occupation of the West Bank, its restrictions towards the Gaza Strip and the need for a return to peace talks with the Palestinians, who seek statehood in the two territories.

Europe is pursuing plans to enforce the labeling of products made in Israeli settlements in the West Bank, to make clear they are made on occupied land, not in Israel. That move has angered Israel, which believes Europe is applying double standards and sanctioning an important trade partner.

Some British supermarkets already label Israeli settlement goods and the British Foreign Office has posted warnings on its website about the risks of doing business with Israeli companies that operate in the West Bank.

At the same time, Cameron and Netanyahu, both political conservatives, have enjoyed warm relations in the past and Cameron has spoken positively about Israel.

Despite that, Netanyahu faced public demonstrations as he arrived in London, with hundreds of people waving anti-Israel placards outside Cameron’s Downing Street residence.

More than 100,000 people in Britain have also signed a petition calling for Netanyahu to be arrested for war crimes over the conflict between Israel and Hamas in Gaza last year.

Britain has said visiting leaders have immunity from legal process and thus cannot be arrested. It has also given measured support to Israel’s right to self-defense while ruing the “terrible toll” of the Gaza war, in which some 2,100 Palestinians, the majority of them civilians, were killed as well as 73 on the Israeli side, almost all of them soldiers.

As well as over Gaza, Israel’s relations with Europe have been strained by Netanyahu’s campaigning against the nuclear deal with Iran reached by Britain, France and Germany, as well as the United States, China and Russia.

Netanyahu says the deal does not do enough to cap Iranian nuclear projects with bomb-making potential while spelling a windfall in sanctions relief Tehran could use to fund Hamas, Lebanon’s Hezbollah and other guerrilla allies in the region.

That argument has had limited traction in a West more troubled by Sunni Muslim insurgents such as Islamic State, which counts Iran – a Shi’ite power – among its ideological enemies.

“We are ready to work together with Europe, Africa and other places in order to fight extremist Islam. But this necessitates a change in attitude, and this change will take time. But we will bring it about,” Netanyahu said.