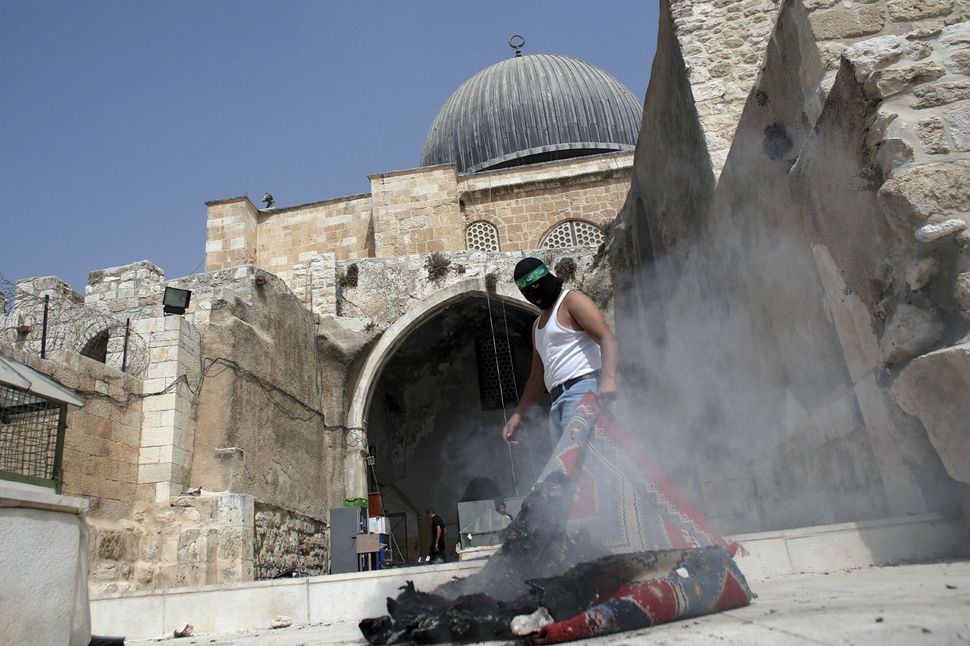 Israeli police raided the plaza outside Jerusalem’s al-Aqsa mosque on Sunday in what they said was a bid to head off Palestinian attempts to disrupt visits by Jews and foreign tourists on the eve of the Jewish New Year.

Police used tear gas and threw stun grenades towards Palestinian youths, who barricaded themselves inside the mosque and hurled rocks and flares, a Reuters witness said. Israeli Public Security Minister Gilad Erdan, in a statement, said the Palestinian youngsters also had pipe bombs.

There was no sign these had been detonated. No serious injuries were reported and the compound, revered by Muslims as the Noble Sanctuary and by Jews as the Temple Mount, was opened to visitors after the violence subsided, police said.

A statement from Palestinian President Mahmoud Abbas said he “strongly condemned the aggression of the Israeli storming of al-Aqsa this morning with troops and occupation police.”

Al Aqsa official Radwan Amr said 32 of the mosque’s windows were completely or partially destroyed, a door was shattered and the carpet burned in 12 places.

The Palestinian youths, Israeli police said in a statement, had intended “to disrupt the routine of visits to the Temple Mount on the eve of Rosh Hashana,” the Jewish New Year, which begins at sunset on Sunday.

“A police force … surprised the barricaded youngsters and entered the Temple Mount area” so that the visits could get under way, the statement added.

Jewish ultranationalists have been pushing the Israeli government to allow Jewish prayer on the compound outside al-Aqsa, which stands above Judaism’s Western Wall.

Such worship, certain to stir Muslim anger, has been banned on the plaza by Israel since it captured East Jerusalem, and its Old City, in the 1967 Middle East war.

Israel regards all of Jerusalem as its indivisible and eternal capital, a claim not recognized internationally.

Palestinians want East Jerusalem, annexed by Israel after the 1967 war, as the capital of a state they aspire to establish in the occupied West Bank and in the Gaza Strip.