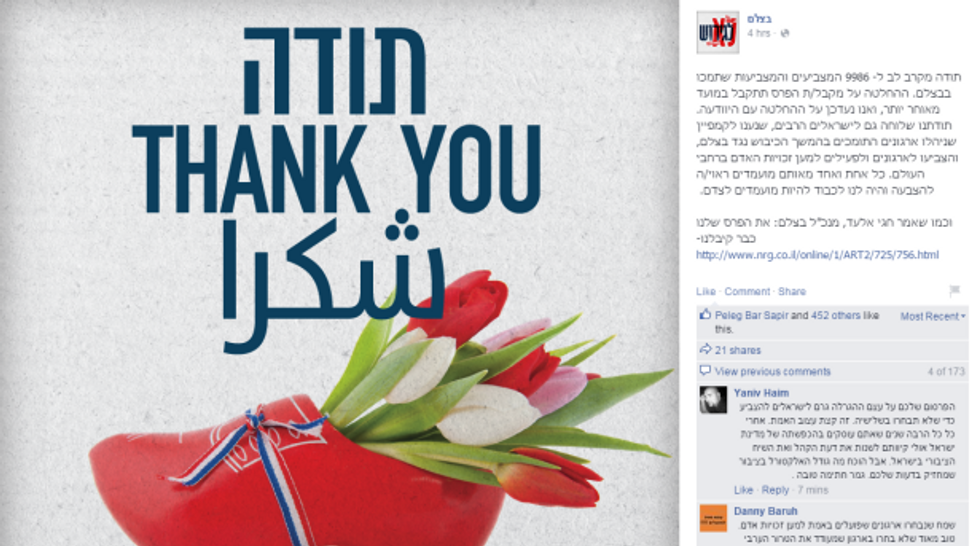 Burmese human rights activist Phyoe Phyoe Aung ranked first in the online voting for the Dutch Human Rights Tulip 2015, the results of which were announced on Thursday. B’Tselem, which had led for much of the online voting process, came in fourth.

Dutch Foreign Minister Bert Koneders will decide on the recipient of the Tulip from the top three candidates in the online voting, along with three “wild card” candidates. His decision will be announced in December.

It is still possible that B’Tselem may be included as one of the wild card candidates. Established in 2008, the Human Rights Tulip is awarded to individuals and organizations who “promote and support human rights in innovative ways.” B’Tselem and the Palestinian-Israeli organization Adalah were among the 30 finalists.

A B’Tselem Facebook post calling for its supporters to vote for it, under the slogan “Foreign funding to end the occupation? Certainly,” aroused the ire of right-wing activists in Israel, who mobilized their forces to vote for anyone but B’Tselem in the online poll.

What followed was an online war. The right-wing organization My Israel, supported by Ronen Shoval, one of the founders of the Im Tirtzu organization and chairman of Professors for a Strong Israel, published a list of the candidates they recommended their followers vote for. At the top pf the list was Phyoe Phyoe Aung.

B’Tselem responded by accusing its right-wing opponents of “sabotaging” and “manipulating” the online voting.

“Thanks to all who voted,” Shoval posted on Facebook after the results of the voting were announced. “We won because they won’t receive money. We won because we acted for the sake of Israel and the IDF. We have love and we have faith and in the end we will win.”

“We are proud because almost 10,000 people voted for B’Tselem,” the organization said in a statement. It is difficult to ignore the irony of supporters of the occupation regime and settlements mobilizing on behalf of wonderful activists from other countries.”