5 Things About the Violence Spike on the Temple Mount 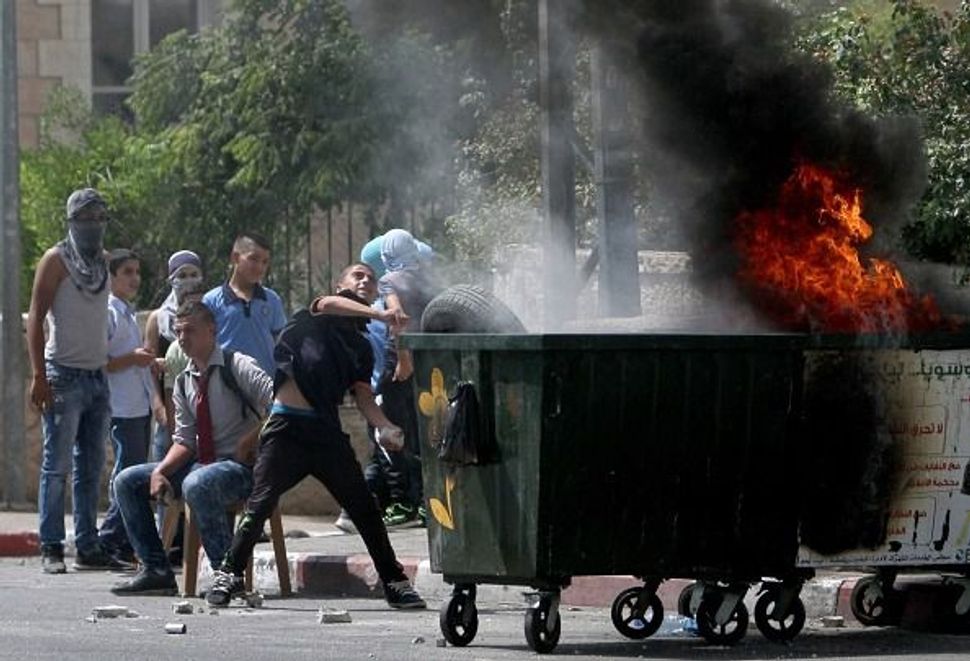 (JTA) — For Israelis, the Ten Days of Repentance from Rosh Hashanah to Yom Kippur have turned into days of violence. Unrest has swelled in Jerusalem following an Israeli ban on a protest group at the Temple Mount, the holy site known to Muslims as the Haram al-Sharif. The clashes have left one Israeli dead and dozens of Israelis and Palestinians injured.

The clashes have been matched by a war of words, with Israeli Prime Minister Benjamin Netanyahu declaring “war” on Palestinian stone throwers and Palestinian Authority President Mahmoud Abbas vowing that Jews will not be allowed to “dirty” the Temple Mount.

Here’s how the clashes started, what’s driving the violence and how Israel, the Palestinians and the world are responding.

Clashes at the Temple Mount are nothing new, particularly around the Jewish High Holidays. The latest round broke out following Israel’s decision on Sept. 9 to bar an Islamist protest group from entering the site. Israel said the group, known as the Murabitat, and its corresponding men’s faction have been yelling at Jewish visitors and throwing stones at them.

“The aforesaid organizations strive to undermine Israeli sovereignty on the Temple Mount, change the existing reality and arrangements at the site and infringe on freedom of worship,” said the Israeli statement announcing the ban.

Omar Kiswani, who directs the Al-Aqsa mosque on the mount, told the Guardian that Israel should not have the authority to restrict Muslims from entering the site.

“We call upon all Muslims to be present in Al-Aqsa,” he said. “It is the home of all Muslims and their presence in this place would intensify their connection to this place.”

Three days later, Israeli police raided the mount on the eve of the Jewish New Year, uncovering a stockpile of pipe bombs, firebombs and rocks that they feared would be aimed at Jewish worshippers. That night, a Jewish-Israeli, Alexander Levlovich, 64, was attacked by Palestinian protesters in the eastern Jerusalem neighborhood of Armon Hanatziv. They pelted his car with rocks, causing Levlovich to lose control of the vehicle and smash into a pole. He died the following morning.

Clashes between Israeli police and Palestinian protesters continued the following day, with two Israelis injured. On Tuesday, the third day of rioting, 26 Palestinians and five Israeli police officers were lightly wounded at the Temple Mount, according to Reuters.

On Sept. 18, police barred Muslim men under 40 from the mount in anticipation of unrest following Friday prayers. Some 200 Palestinians protested the move at the Damascus Gate to Jerusalem’s Old City and near the site where Levlovich was killed. Overall, according to Haaretz, three Israeli policemen and 21 Palestinians were injured in the Friday clashes.

Israel Police spokesman Micky Rosenfeld said that since Friday, an increased police presence in eastern Jerusalem has tamped down the violence.

Neither side is happy about restrictions on the Temple Mount

Controversy over who can do what at the holy site has been festering for decades. Although Israel has overall control of the area, a joint Jordanian-Palestinian Islamic religious body called the Waqf governs it.

Under current regulations, Muslims may visit and pray on the mount. Jews may also visit during limited hours, but are prohibited from praying or doing a range of things — kneeling, bowing, even crying — that resemble worship.

Jewish activists have called for greater access, but the Israeli government has resisted the call so as not to upset the delicate balance at the site. Some Muslims are also unhappy, claiming that Israel should not be permitted to control access to the Temple Mount.

“Israel will not be allowed to continue its steps,” Abbas said, according to reports. “The Al-Aqsa mosque is ours. They have no right to dirty it with their filthy feet. We will not allow them to do that.”

Jews make up a small minority of visitors to the Temple Mount. Just 12,000 Jews visit per year, compared to 3 million to 4 million Muslims.

Israel has stepped up its rhetoric and police presence to combat the unrest. Israel added 800 officers to its Old City contingent, bringing the total number of police there to 3,500, according to Rosenfeld.

Israeli Prime Minister Benjamin Netanyahu also declared “war” on stone throwers this week. Netanyahu is pushing through a new law that would allow police to fire more quickly on Palestinian stone throwers, as well as increase the stone throwers’ prison sentences and fines.

“We attest to the fact that we decided to change the policy and declare war on those who throw stones and firebombs, shoot and riot,” Netanyahu said Thursday. “In the State of Israel, people do not throw firebombs, or shoot at trains, or throw stones at will. Those who do so will pay a very heavy price.”

On Monday, the U.S. State Department called on all sides to “refrain from provocative actions and rhetoric.” The United Nations Security Council used similar language in a statement Thursday, adding that “Muslim worshippers at the Haram Al-Sharif must be allowed to worship in peace, free from violence, threats and provocations.”

Neither statement explicitly cast blame on either Israelis or Palestinians for the clashes. But Jordan’s King Abdullah II criticized Israel’s actions, saying Monday that “any more provocation in Jerusalem will affect the relationship between Jordan and Israel,” according to the French news agency AFP.

Israel insists that it is committed to maintaining the status quo. Its actions, Netanyahu said, have come only to prevent violence at the site.

“Israel will maintain the status quo,” Netanyahu told his Cabinet on Sunday. “We have no plans to change them, but we also have no intention of allowing anyone to cause the deterioration of the arrangements on the Temple Mount by resorting to explosive and widespread violence.”

5 Things About the Violence Spike on the Temple Mount