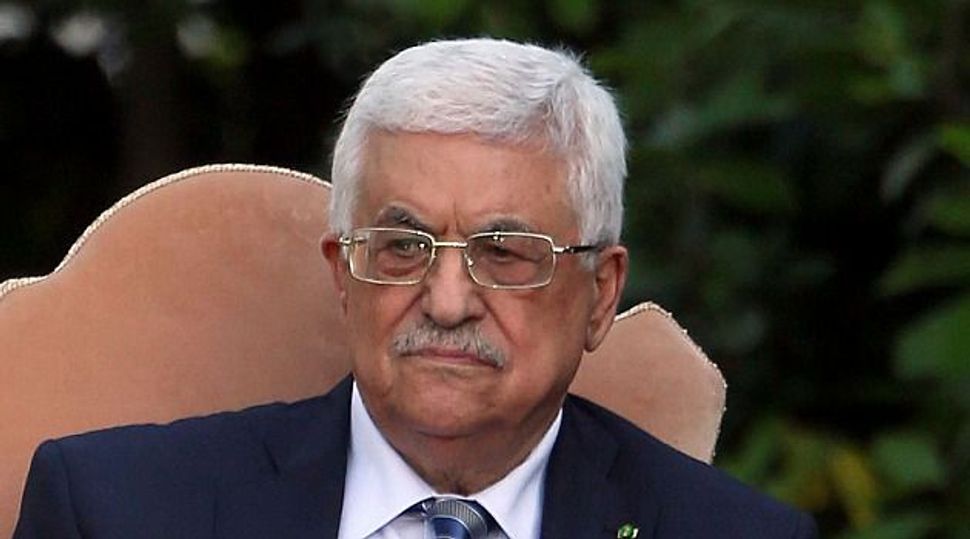 Palestinian President Mahmoud Abbas warned on Tuesday that there was a risk of a new Palestinian intifada, or uprising, erupting if violence at the al-Aqsa mosque in Jerusalem did not ease and peace talks with Israel did not resume.

Israeli-Palestinian strife has risen sharply in recent weeks as Arab states and Palestinians have accused Israeli forces of violations at Jerusalem’s al-Aqsa mosque, one of Islam’s holiest sites.

“We spoke about what’s happening at al-Aqsa,” Abbas told a news conference after meeting French President Francois Hollande. “It’s extremely dangerous. We don’t want it to continue and (if it did) the alternative would be chaos or an intifada (uprising) that we don’t want.”

Abbas called on Prime Minister Benjamin Netanyahu to order an end to Israeli actions in Jerusalem’s Old City where al Aqsa is located, stop continued settlement activity in the Israeli-occupied West Bank and return to the negotiating table.

“We consider the only way to reach peace is through negotiations,” he said. The talks collapsed in April 2014.

Hollande urged calm in Jerusalem and said the 1967 “status quo,” which meant access for Palestinians to al Aqsa, could not be put into question. Israel captured Jerusalem’s Old City and the West Bank in the 1967 Middle East war.

Abbas sees Israel’s actions at al-Aqsa as an attempt to change the long-standing status quo under which Jewish access is permitted but Jewish prayer banned. Jews refer to the area as Temple Mount, where an ancient Jewish temple once stood, and it is the most sacred place in Judaism.

Netanyahu’s office said last week that Israel was committed to maintaining the status quo and that Palestinian “rioters” would not be allowed to prevent Jews visiting the area.

The Palestinians waged two previous intifadas against Israel – in the late 1980s and in 2000-2005. Interim peace deals were signed two decades ago, but follow-up negotiations on a state Palestinians seek in the West Bank and Gaza Strip with East Jerusalem as their capital have gone nowhere.

The veteran Palestinian leader was in Paris to meet Hollande ahead of the United Nations General Assembly next week.

France is trying to launch an international “contact group” at the United Nations that would comprise U.N. Security Council members, Arab states and the European Union with a view to reviving the peace process.

“We have proposed to create a framework for an international group to help prepare a restart of this dialog,” Hollande said. “The idea has been supported on the whole and at the U.N. General Assembly and in the months to come we will work to give it some substance.”

Paris had previously hoped to promote a Security Council resolution that would set negotiating parameters and establish a time frame, possibly 18 months, to complete the talks.

But the idea has been put on the back burner due to scant support, especially from the United States, Israel’s closest ally, ahead of a presidential election campaign.