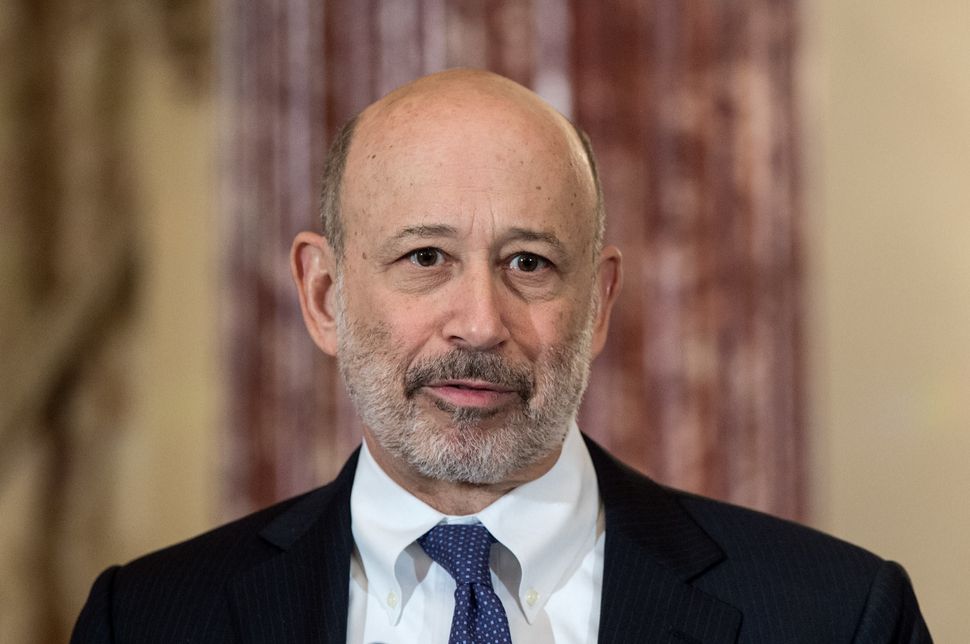 Lloyd Blankfein, the chairman and chief executive officer of Goldman Sachs Group Inc, said on Tuesday he had a “highly curable” form of cancer and would be able to work mostly as normal during treatment.

The veteran Wall Street boss, who steered the U.S. investment bank through the financial crisis, told employees and shareholders he would undergo chemotherapy for lymphoma over the next several months in New York.

The bank’s shares finished down 1.98 percent at $179.72 a share on the New York Stock Exchange, underperforming a weaker wider market, as the announcement put Goldman’s succession plans under the spotlight.

While Blankfein, 61, is undergoing treatment, other senior bank officials, including his top deputy, Chief Operating Officer Gary Cohn, will assume some of his responsibilities in dealing with the public, a person familiar with the matter said.

Cohn, who is seen as the most likely successor to Blankfein if he left his post in the near future, replaced his boss at the last minute at a public discussion in New York on Monday night.

“The culture of the firm transcends one person,” said Mike Donnelly, senior vice president and portfolio manager at CS McKee, which manages $10.5 billion in assets and owns Goldman shares.

“Obviously, Blankfein has done a great job and embodies the culture, but in terms of this changing the investment thesis given the valuation, no, absolutely not.”

In a statement, Blankfein said he underwent tests after not feeling well over several weeks in late summer. He did not disclose the type of lymphoma, a cancer that affects the immune system, or how advanced it is.

He received a final diagnosis on Monday around midday, and informed Goldman’s board of directors around 4 p.m. EDT (2000 GMT), the source said.

Lymphoma is a cancer that begins in the lymphatic system, which is a part of the immune system that carries away waste and transports white-blood cells that attack disease. It can occur as Hodgkin lymphoma; 86 out of 100 people diagnosed with it live for five years or more. For non-Hodgkin lymphoma, 70 out of 100 people will survive for five years or more.

Dr. Len Lichtenfeld, an oncologist who is deputy chief medical officer of the American Cancer Society, said chemotherapy is the main treatment for both Hodgkin and non-Hodgkin disease.

Individuals in their 60s and 70s are more likely to have the more common and harder-to-treat non-Hodgkin variety of the blood cancer, which affects the body’s infection-fighting white blood cells, he said.

Depending on where enlarged lymph nodes are found, and their size, he said, doctors may use radiation as well as chemotherapy.

There are no specific rules on how publicly listed companies inform investors about a senior executive’s health.

But investors expect to be informed.

“You don’t want day-to-day health bulletins, but you do want to know if the prognosis changes,” said Chris Niemczewski, managing principal at Marshfield Associates in Washington, which has $2 billion under management and is a Goldman shareholder. “You want to know if it stops being a risk.”

Blankfein’s disclosure comes a little more than a year after JPMorgan Chase & Co CEO Jamie Dimon said he had throat cancer. Dimon continued to lead the bank during treatment, which finished last autumn.

Dimon wished his rival a fast recovery on Tuesday, and Blankfein told staff he was confident he would be cured.

“There are many people who are dealing with cancer every day,” Blankfein said. “I draw on their experiences as I begin my own. I have a lot of energy and I’m anxious to begin the treatment.”

Blankfein has led what is viewed as the most powerful U.S. investment bank since 2006, and bank executives say he has never hinted at when he might retire or his plans after Goldman.

The New Yorker is credited with helping to keep the company afloat during the financial crisis with an early decision to rein in exposure to risky mortgage-backed securities and a successful appeal to Warren Buffett to invest in Goldman during the chaotic days after Lehman Brothers went bust.

Goldman’s role in the U.S. housing bubble and the billions of dollars paid out in bonuses to its top staffers have made the firm a magnet for popular anger about Wall Street. Rolling Stone magazine once referred to the firm as the “vampire squid” of finance.

Blankfein, a former chain-smoking gold trader, has helped improve the bank’s public image and aided its transition from a pure investment bank to one with a greater exposure to commercial lending.

Blankfein’s No. 2, Cohn, has followed a similar career path as his boss. Like Blankfein, Cohn got his start at commodities firm J. Aron & Co, which Goldman then acquired. He has been COO as long as Blankfein has been CEO and is six years younger.

Blankfein’s life is a classic rags-to-riches story. Born in the South Bronx and raised in a housing project in Brooklyn’s East New York neighborhood, he worked his way through Harvard College and Harvard Law School, helped by financial aid.—Reuters