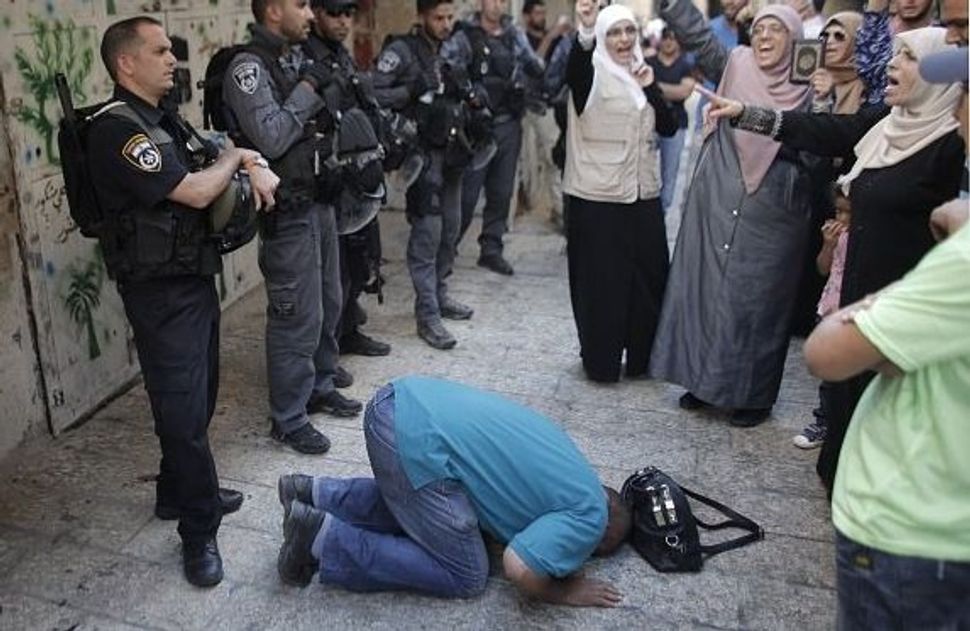 The Israel Police announced Wednesday evening that the Temple Mount complex in Jerusalem will not be open to Jews or other visitors Thursday, during the Muslim holiday of Eid al-Adha (Feast of Sacrifice).

Muslim worship at the site, which has been a seen increasing violence in recent weeks, will be unrestricted and Palestinians from the West Bank will be permitted access.

The decision – probably taken in wake of pressure from Jordan – is the most recent in a string of attempts to defuse tensions at the flashpoint hilltop Jerusalem compound known to Muslims as the Noble Sanctuary and to Jews as the Temple Mount.

A Palestinian protester kicks a burning tire during clashes in Jerusalem, September 15, 2015.Reuters For example, Jewish activists claim that the female Muslim group Morabitat, which protests against Jewish visits to the site and has recently been outlawed by the government, has been permitted to resume its activities.

Jordan, which has a peace treaty with Israel, administers Muslim religious affairs at the site, sacred to both Jews and Muslims. The Jerusalem Police are reinforcing their presence throughout the city, especially on the Temple Mount, the Old City and Palestinian neighborhoods. On Tuesday, the site was open to Jews, and some 37 visitors arrived without incident.

There were several clashes between Palestinians and Israelis in Jerusalem on Wednesday as Yom Kippur (the Jewish Day of Atonement) was observed until sunset.

A Palestinian boy was lightly wounded by stones thrown by Jewish teens, in one of several incidents of stone-throwing toward Palestinian vehicles.

In another incident, a fire erupted when the home of a Jewish family in the Abu Tor neighborhood was attacked with a firebomb. The fire was extinguished, without any casualties.

Jewish teens threw stones at moving vehicles near the entrance to the Har Homa neighborhood in East Jerusalem and on the Hebron Road in south Jerusalem – an area with relatively heavy traffic for Yom Kippur, being a main thoroughfare for the Palestinian neighborhoods.

In one incident, a 12-year-old Palestinian boy was lightly wounded and treated on site by a Magen David Adom crew. Six Jewish teens were arrested.

In a separate incident, another Jewish teen was detained for allegedly throwing stones on Hebron Road, and two adults who tried to prevent the arrest were also detained.

In Beit Hanina, stones were thrown at firefighters who had been alerted to a fire in the area. There were no casualties.