Did Pope Francis and Benjamin Netanyahu Agree on Moses? 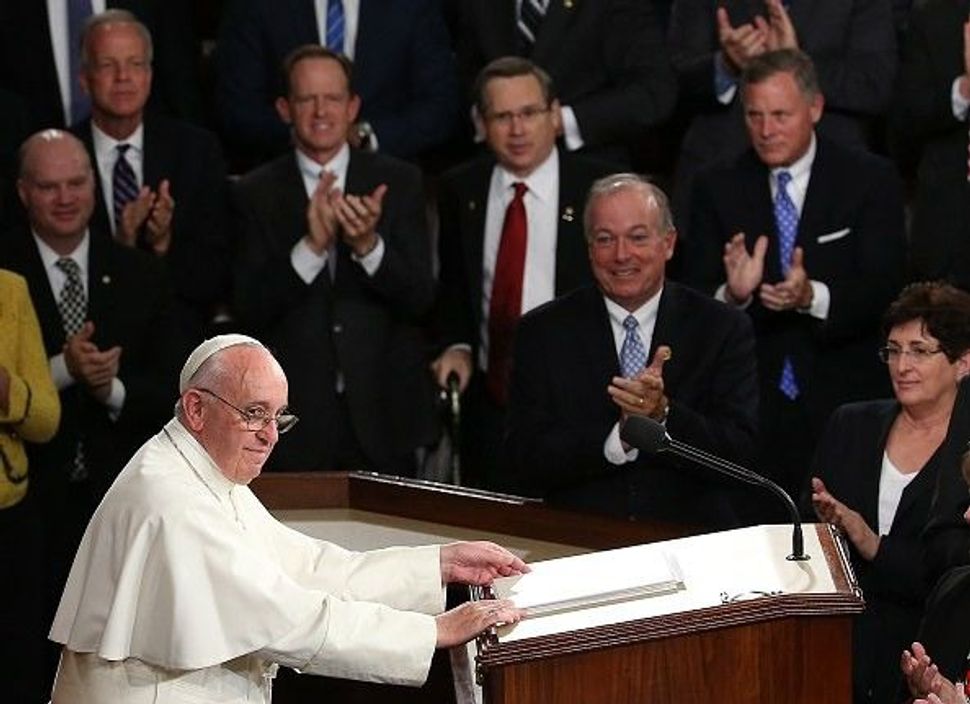 (JTA) — The marble visages of 23 historic lawgivers overlook the U.S. House of Representatives chamber: 11 on the east side, 11 on the west and Moses in the center — with all 22 others facing north toward him.

In addresses to joint sessions of Congress this year, two speakers have gestured toward the relief of Moses: Pope Francis on Thursday and Israeli Prime Minister Benjamin Netanyahu in March.

Francis found in Moses the intersection of justice and the divine: The law Moses handed down, the pope said, has its source in the divine image.

Netanyahu ended his speech by noting Moses’ role as a leader of the Jewish people and as an inspiration for their resolute protection and defense.

Here are the two leaders’ takes on the biblical prophet:

“Yours is a work which makes me reflect in two ways on the figure of Moses. On the one hand, the patriarch and lawgiver of the people of Israel symbolizes the need of peoples to keep alive their sense of unity by means of just legislation. On the other, the figure of Moses leads us directly to God and thus to the transcendent dignity of the human being. Moses provides us with a good synthesis of your work: You are asked to protect, by means of the law, the image and likeness fashioned by God on every human face,” said Francis.

“Facing me right up there in the gallery, overlooking all of us in this [inaudible] chamber is the image of Moses. Moses led our people from slavery to the gates of the promised land.

“And before the people of Israel entered the land of Israel, Moses gave us a message that has steeled our resolve for thousands of years. I leave you with his message today: “Be strong and resolute, neither fear nor dread them [in Hebrew].

“My friends, may Israel and America always stand together, strong and resolute. May we neither fear nor dread the challenges ahead. May we face the future with confidence, strength and hope,” said Netanyahu.

Both men concluded by blessing America.

Did Pope Francis and Benjamin Netanyahu Agree on Moses?