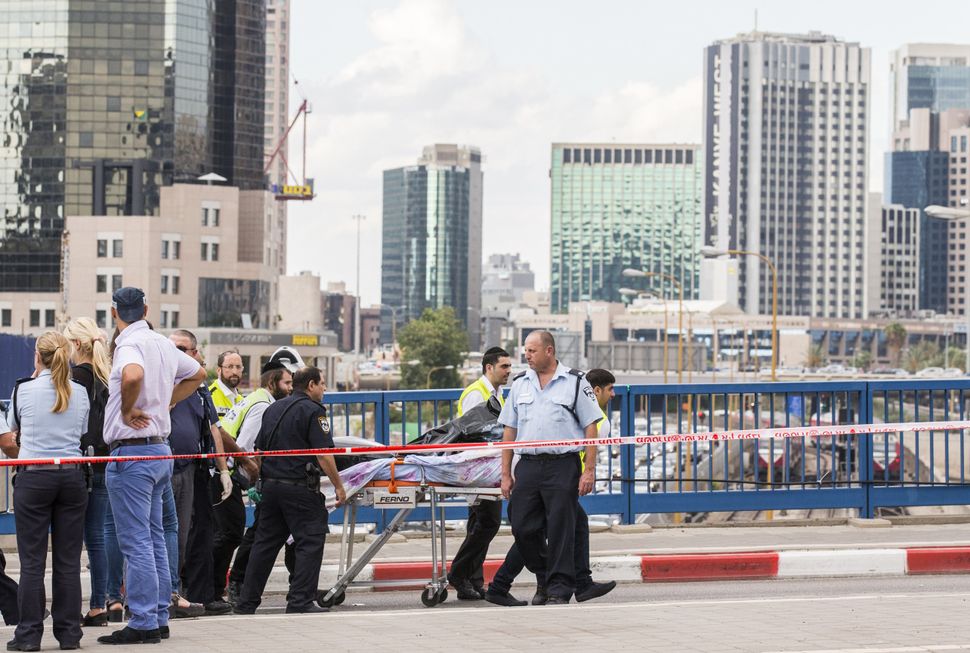 Four people, including an Israeli soldier, were stabbed and wounded near a military headquarters in Tel Aviv on Thursday, police and ambulance sources said, as a rash of such Palestinian attacks spread to Israel’s commercial capital.

The assailant was shot and killed by another soldier as he fled, a police spokeswoman said.

The spate of “lone-wolf” stabbing attacks has alarmed authorities and unsettled Israelis, with Jerusalem’s mayor urging people with gun licenses to carry their weapons and Israeli leaders vowing to quash the violence though apparently stumped over how to do so.

Shortly after the Tel Aviv attack, a Palestinian stabbed and wounded a man in the Jewish settlement of Kiryat Arba in the occupied West Bank, an ambulance service official said.

Hours earlier, a Jewish seminary student was wounded in a Palestinian knife attack on a main road in Jerusalem. Police said the assailant was arrested at the scene.

Four Israelis have been killed in stabbings in Jerusalem and a drive-by shooting in the occupied West Bank in the past week. Two Palestinians have been shot dead and scores injured in clashes with security services, triggering fears of escalation.

With violence mounting, Israel also turned its attention to the social media front, asking Facebook and YouTube to remove videos it says have been encouraging Palestinian attacks.

In a bid to lower tensions, Prime Minister Benjamin Netanyahu’s office announced he had banned Israeli cabinet ministers and legislators from visiting a sensitive Jerusalem religious site holy to Muslims and Jews.

The Tel Aviv attack occurred just across the road fom the Kirya military compound, which also houses the defense ministry. A police spokeswoman, identifying the attacker as a Palestinian, said a female soldier was stabbed with a screwdriver.

Israeli government officials have accused Palestinian leaders of playing on Muslim concerns over al-Aqsa to incite Palestinians to violence – so far mostly “go-it-alone” attacks that appeared to fall short of an organized uprising – in the absence of peace talks that collapsed in 2014.

But Israeli military officials have noted that security cooperation with the Palestinian Authority, which exercises limited self-rule in the occupied West Bank, is continuing. Palestinian President Mahmoud Abbas has said publicly he wants to avoid armed confrontation with Israel.