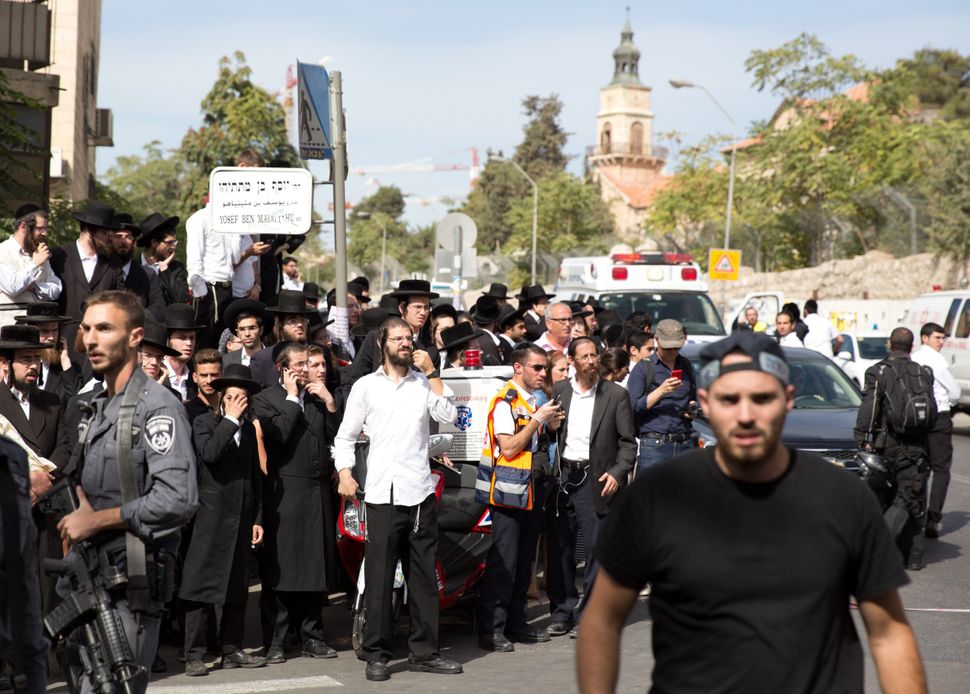 Palestinian men armed with knives and a gun killed at least three people and wounded several others in a string of attacks in Jerusalem and near Tel Aviv on Tuesday, police said, on a “Day of Rage” declared by Palestinian groups.

With the worst unrest in years in Israel and the Palestinian territories showing no sign of abating, Prime Minister Benjamin Netanyahu convened an emergency meeting of his security cabinet to discuss what police said would be new operational plans.

Officials said Israel was considering whether to seal off Palestinian districts in East Jerusalem – home of many of the assailants of the past two weeks – from the rest of the city.

Unlike their brethren in the occupied West Bank, East Jerusalem Palestinians can travel freely in Israel. It annexed East Jerusalem after a 1967 war in a move not recognized abroad.

In Jerusalem, two Palestinians shot and stabbed passengers on a bus, killing two and injuring four, police said. One of the assailants was killed and the other captured.

Minutes later, a Palestinian rammed his car into a bus stop in an ultra-Orthodox Jewish neighborhood of the city, police said. A surveillance video showed him then hacking pedestrians with a cleaver until he was shot dead by a passer-by. One of the Israelis he attacked died and six others were hurt, police said.

In clashes near the West Bank city of Bethlehem, the Israeli army shot dead a Palestinian, medics said. The army said its troops fired on a man who tried to throw a petrol bomb at them.

Seven Israelis and 29 Palestinians, including 10 alleged attackers and eight children, have died in the surge of violence. The Obama administration, whose efforts to broker an Israeli-Palestinian peace deal stalled last year, voiced alarm.

The violence has been stirred in part by Muslim agitation over increasing Jewish visits to the al-Aqsa mosque compound in Jerusalem, Islam’s holiest site outside the Arabian Peninsula.

It is also the vestige of two biblical Jewish temples, and Palestinians worry that Israel’s right-wing government has designs on eroding Muslim religious control of the compound.

Netanyahu has said repeatedly that Israel will not allow any change to the status quo under which Jews are allowed to visit the site but non-Muslim prayer is banned.

While disavowing the violence, U.S.-backed Palestinian President Mahmoud Abbas has called for al-Aqsa to be “defended” from Israel, and his administration has echoed allegations swirling around Arabic social media that some of the Palestinians killed by police had been summarily executed.

“Stop lying. Stop inciting,” Netanyahu said in remarks addressed to Abbas during a speech in the Israeli parliament. “If the situation deteriorates as a result of this incitement … you will bear responsibility.”

With Israel’s Jews increasingly afraid, merchants reported that pepper spray for self-defense was selling out.

“We don’t know what to do, or where to walk,” Avi Shemesh, a witness to the first attack, told reporters. “They are Israel-haters and they need to be eliminated.”

In Raanana, just north of Tel Aviv, a Palestinian man stabbed and lightly wounded an Israeli on a shopping street during the morning rush hour, officials and witnesses said.

Amateur video distributed by police showed several men kicking and beating the alleged assailant as he lay on the ground. Israeli paramedics said he had been seriously hurt.

Within an hour, another Palestinian stabbed and wounded four people in Raanana before being arrested, police said.

And in the parking lot of an Ikea furniture store in northern Israel, a Jewish man, who police said had intended to carry out a revenge attack, stabbed and wounded a fellow Jew, mistaking him for an Arab.

The main Palestinian factions, Abbas’ Fatah movement and the Islamist militant Hamas group, had declared Tuesday a “Day of Rage” across the West Bank, Gaza and East Jerusalem, accusing Israel of “escalating its crimes against our people.”

Leaders of Israel’s Arab minority called for a commercial strike in their towns, one of which, Sakhnin, hosted a pro-Palestinian rally attended by thousands of people on Tuesday.

Addressing the crowd, lawmaker Ahmed Tibi said the Netanyahu government was “playing with fire when it comes to al-Aqsa.”

The now-daily stabbings have raised speculation that Palestinians could be embarking on another uprising or intifada, reflecting a new generation’s frustrations over their veteran leadership’s failure to achieve statehood.

But in Geneva, where the Palestinians’ flag was raised at U.N. headquarters for the first time on Tuesday after their promotion to “non-member observer state,” Palestinian Foreign Minister Riad al-Malki said he did not expect a new uprising, though he accused Netanyahu of seeking confrontation.—Reuters