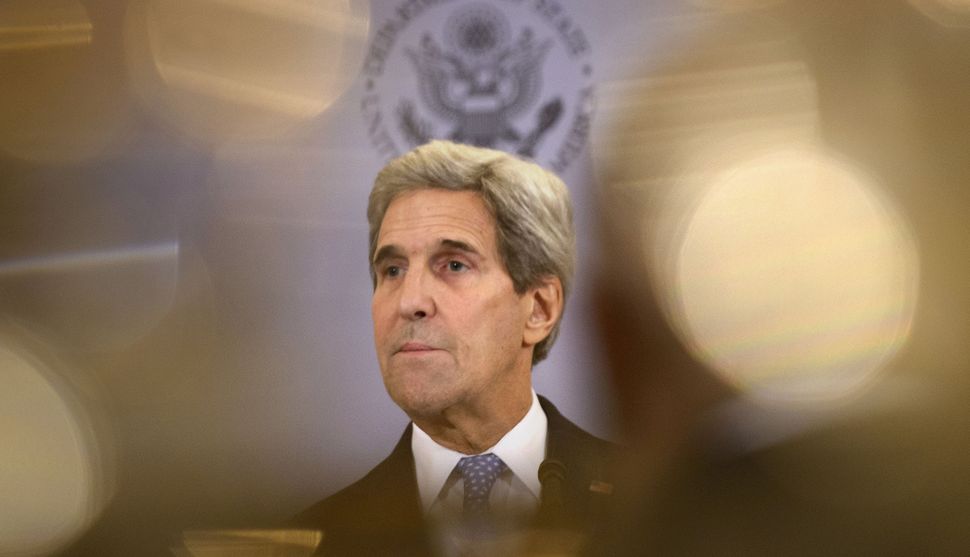 Secretary of State John Kerry said he will travel to the Middle East “soon” to move Palestinians and Israelis from violence to peace.

Kerry also linked the surge of Palestinian violence on Israelis to the “increase in settlements,” during a speech Tuesday night at the Harvard Kennedy School’s Belfer Center for Science and International Affairs.

“I will go there soon, at some point appropriately, and try to work to reengage and see if we can’t move that away from this precipice,” Kerry said.

“We’re working on trying to calm things down,” he added.

Seven Israelis have been killed and many more injured in attacks throughout Israel and the West Bank since Oct. 1 when a young Israeli couple were killed in front of their four children. At least 27 Palestinians, including nine alleged assailants, have been killed.

Kerry said that frustration over settlement building has led to the violence.

“What’s happening is that, unless we get going, a two-state solution could conceivably be stolen from everybody,” Kerry said. “And there’s been a massive increase in settlements over the course of the last years, and now you have this violence because there’s a frustration that is growing.”

Earlier on Tuesday in remarks in Boston with Australian government ministers, Kerry reiterated the Obama administrations condemnation of terrorist attacks against Israeli civilians including two that day in Jerusalem that killed three Israelis. Two Palestinian attackers and a Palestinian demonstrator near Bethlehem also were killed on Tuesday.

“Naturally, we mourn the loss of any life, no matter who it is. But this violence and any incitement to violence has got to stop. The situation is simply too volatile, too dangerous. And it is not going to lead to the outcome that people want, which is to have a peaceful resolution of the differences. We continue to stress the importance of all persons of responsibility to condemn the violence on either side and to avoid provocative statements that can inflame the tensions even further,” he said, adding that he was in “close touch” with Israeli and Palestinian leaders.

The United States’ Consulate General in Jerusalem on Tuesday issued a Security Message or U.S. citizens to alert them to the “continued potential for violence and unrest in and around Jerusalem and the West Bank.”

The message calls on U.S. citizens to “exercise heightened security awareness in East and West Jerusalem, the Old City and the West Bank due to an increase in political violence and unrest that has resulted in multiple deaths and injuries since early October.”

The consulate said that it has placed temporary restrictions on its employees’ travel in the West Bank and Jerusalem. “We recommend that private U.S. citizens take into consideration these restrictions,” the message said.