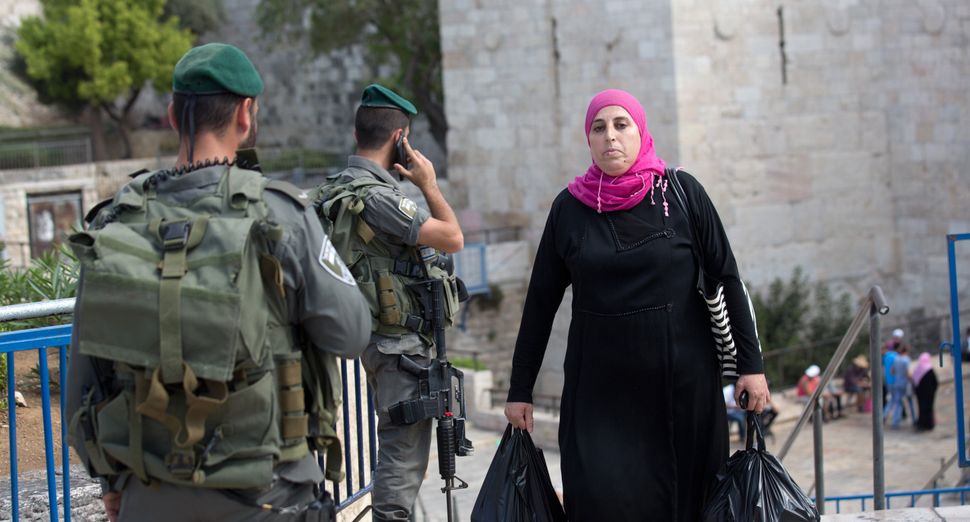 Israel began setting up roadblocks in Palestinian neighborhoods in East Jerusalem and deploying soldiers across the country on Wednesday to stop a wave of Palestinian knife attacks.

In the latest incident, a Palestinian stabbed and moderately wounded a 70-year-old woman outside Jerusalem’s central bus station, at the entrance to the city, before an officer shot him dead, a police spokeswoman said.

Two hours earlier, another Palestinian was also shot dead after he had attempted to stab paramilitary police at an entrance to Jerusalem’s walled Old City, police said.

Television footage showed the assailant clad in military-style camouflage clothing, running with a knife in his hand. Shots are then heard and in other video he appears to be shot again when lying on the ground before an officer calls on his comrades to halt fire.

Violence has been partly triggered by Palestinians’ anger over what they see as increased Jewish encroachment on Jerusalem’s Al-Aqsa mosque compound, also revered by Jews as the site of two destroyed Jewish temples.

There is also deep-seated frustration with the failure of years of peace efforts to achieve Palestinian statehood and end Israeli settlement-building in the West Bank and East Jerusalem.

Israel’s security cabinet had authorized the East Jerusalem crackdown in an overnight session after Palestinians armed with knives and a gun killed three Israelis and wounded several others on Tuesday.

Palestinian officials condemned the new Israeli security measures – the most serious clampdown in the city since a Palestinian uprising a decade ago – as collective punishment.

Seven Israelis and 32 Palestinians, including assailants, children and protesters in violent anti-Israeli demonstrations, have been killed in two weeks of bloodshed.

Israeli paramilitary border police used their vehicles to block an exit at the edge of Jabel Mukabar, an East Jerusalem neighborhood home to three Palestinians who carried out deadly attacks against Israelis on Tuesday.

Policemen carried out body searches and examined the identity papers of Palestinian motorists. Cars were then allowed to leave. Palestinians who live in East Jerusalem carry the same identity papers as Israelis and, unlike their brethren in the West Bank, can travel throughout Israel.

“(Israeli) cabinet decisions will not stop the Intifada (uprising). People of resistance do not fear new security restrictions,” said Hussam Badrawn, a spokesman for the militant Hamas group in the West Bank.

The government said the immediate aim was to stem stabbings and other attacks by Arab assailants, many of whom resided in Jerusalem’s eastern sectors.

One Israeli official who briefed reporters on condition of anonymity said Palestinian neighborhoods would not be sealed off completely, describing the measure as “loose encirclement.”

Israel regards all Jerusalem, including the predominantly Arab east captured and annexed in 1967, as its “indivisible capital” – a claim not recognized internationally – and its right-wing government is wary of being portrayed as dividing the city.

“No one is going to lock down East Jerusalem,” Israeli Justice Minister Ayelet Shaked said on Army Radio.

At a Jerusalem bus stop where a Palestinian from Jabel Mukabar stabbed and killed an Israeli man on Tuesday before being shot dead, an Israeli woman sounded a defiant note.

“They want us to be afraid so we have to do the opposite,” said the woman, who identified herself only as Jana.

Merchants in predominantly Jewish west Jerusalem reported a sharp drop-off in the number of shoppers.

“You can see it’s almost empty here … but we are (in Jerusalem), so we had even worse periods in the past,” resident Avinoam Avganim said on usually busy Jaffa Road, the scene of several of the dozens of Palestinian suicide bombings that rocked the city during the 2000-2005 uprising.

At a late-night meeting of his security cabinet that finished in the early hours of Wednesday, Prime Minister Benjamin Netanyahu allowed revocation of residency rights of Palestinians deemed to have committed terrorism and a step-up in the demolition of homes of people who carried out attacks.

The cabinet also approved an expansion of the national police, extra guards on public transport and the deployment of army units in “sensitive areas” along the steel and concrete barrier that separates the West Bank.