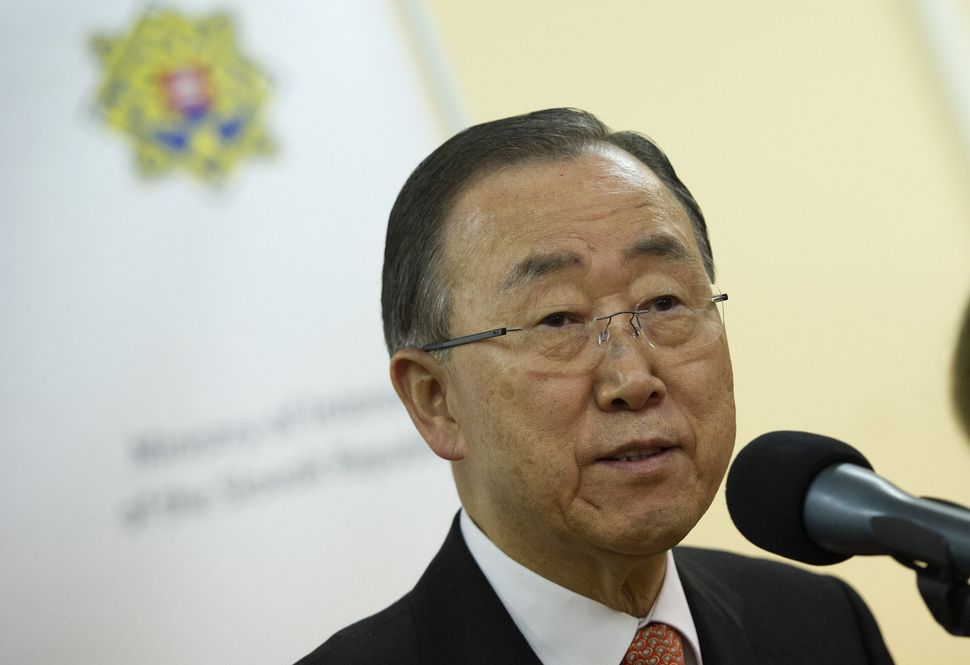 U.N. Secretary-General Ban Ki-moon urged Palestinians and Israel on Tuesday to step back from a “dangerous abyss” as he arrived on a snap visit to the region at the head of international efforts to quell three weeks of violence.

The bloodshed began with a string of stabbing attacks on Israelis in Jerusalem. One reason given by Palestinians for the surge in violence is anger over perceived Jewish encroachment on Jerusalem’s al-Aqsa mosque compound, Islam’s third holiest shrine and also revered by Jews as the site of two ancient Jewish temples.

Speaking moments after arriving, Ban said the wave of unrest was undermining Palestinian hopes for statehood and Israel’s longing for security. “This conflict has gone on for far too long,” he said. “We must, for the future of our children, come back from this dangerous abyss, safeguard the two-state solution and lead people back onto the road towards peace.”

Ban, whose trip was announced in Israel only hours before his arrival, was due to meet Prime Minister Benjamin Netanyahu later in the day in Jerusalem. He will see Palestinian President Mahmoud Abbas in the West Bank city of Ramallah on Wednesday, Palestinian officials said.

U.S. Secretary of State John Kerry, who is to hold talks with Netanyahu either in the Middle East or in Germany during the prime minister’s visit there on Wednesday and Thursday, has said Israeli and Palestinian leaders need to clarify the status of the al-Aqsa compound to help stop the violence.

Palestinians are fuming at what they see as increased Jewish visits to the al-Aqsa plaza, where non-Muslim prayer has been banned for centuries. Israel insists it has made no changes to the rules at the site.

“Israel has not and will not change the status quo. That (to suggest otherwise) is one huge lie,” Netanyahu said in a speech to international Jewish leaders meeting in Jerusalem on Tuesday.

Under long-standing arrangements, Islamic religious authorities administer al-Aqsa. Israel allows Jews to visit but not pray in the compound in Jerusalem’s walled Old City, which it captured along with other parts of East Jerusalem and the West Bank in the 1967 Middle East war.

Abbas said Palestinians were also increasingly frustrated with the failure of peace talks to secure themselves a state. The last round of negotiations collapsed in April 2014.

“Our youth is pressured and desperate over the Israeli government’s failure and the absence of any political future that would provide hope of a fair and just peace allowing our people to be independent beside the state of Israel,” Abbas said in Ramallah.

In the latest deadly incident, a Palestinian vehicle ran over and killed an Israeli motorist whom a Reuters photographer said was using a club to hit Palestinian protesters and cars on a roadside in the Israeli-occupied West Bank. Israeli police said the man had stopped his car after stones were thrown at it.

The driver of the Palestinian vehicle, which the photographer said the Israeli had hit with his club, later turned himself in to Palestinian police, which had no comment on the event. Israeli police said it was not immediately clear if the Israeli had been run over deliberately.

About two hours later, another Palestinian rammed his car into a bus stop near an Israeli settlement in the West Bank, injuring two people, the Israeli military said. It said the man then got out of the vehicle and tried to stab people before being shot by security forces. Police said he had been killed.

Earlier, a Palestinian stabbed and wounded an Israeli officer in the West Bank before other troops shot the assailant, the Israeli military said. The Palestinian Health Ministry said he was killed.

Gaza is controlled by the Palestinian Islamist Hamas group.

Prior to Tuesday’s incidents, eight Israelis were killed in stabbings, shootings and car rammings by Palestinians and Israeli Arabs in Israel, Jerusalem and the West Bank. An Eritrean, mistaken as an assailant during an Arab gunman’s assault in the southern Israeli town of Beersheba, also died after being shot by a security guard and kicked by a crowd.

Israeli security forces have killed at least 43 Palestinians, including 20 assailants and demonstrators, one of whom, police said, fired a gun at them.

In a newspaper interview published on Tuesday, Netanyahu, who has publicly cautioned there was no “quick fix” to the worst Palestinian street violence in years, voiced confidence that the conflict would not widen.

“Proper management has ensured that there will not be a mass conflagration in the name of religious war, including a flare-up in terms of missiles from Gaza and Lebanon,” said Netanyahu, who has been accused by some of his cabinet ministers of not doing enough to keep Israelis safe.

Hundreds of Israeli troops have deployed along with police in Israeli cities.

Early on Tuesday, the Israeli military said its forces had detained Hassan Youssef, a top Hamas leader in the West Bank, for “actively instigating and inciting terrorism and publicly encouraging and praising the execution of attacks against Israelis.”

Youssef has been arrested previously by Israel on a number of occasions. Hamas said Israel should expect “more revenge operations in defense of al-Aqsa.”—Reuters