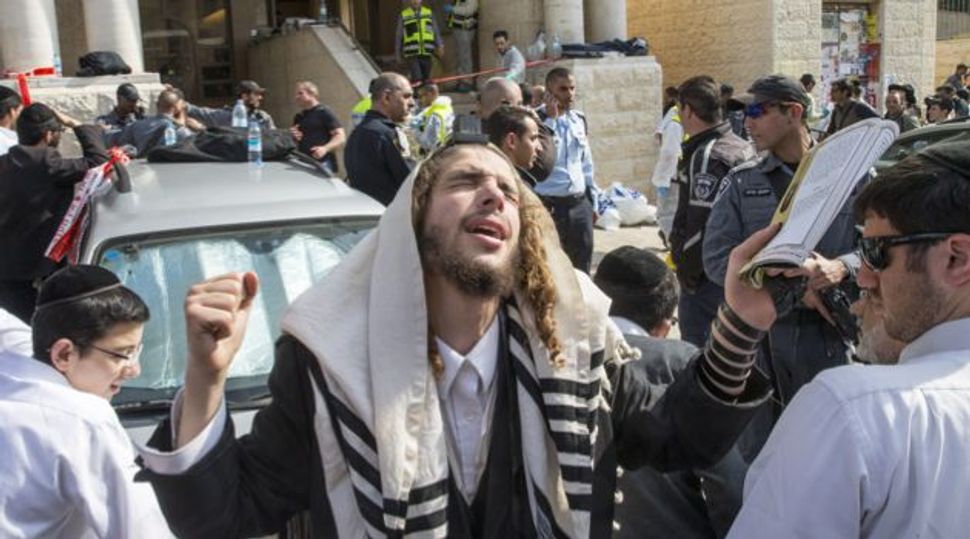 Crying Out: A man prays at the scene of the Har Nof attack. Image by Getty Images

An Israeli man injured nearly a year ago in a terror attack on a synagogue in the Har Nof neighborhood of Jerusalem died of his injures.

Thousands of people gathered on Saturday night for the funeral of Rabbi Haim Yechiel (Howie) Rothman. The funeral procession started at the Bnei Torah synagogue where the attack occurred on Nov. 18 during morning prayers.

Two Palestinian assailants entered the synagogue and rabbinical seminary in the Har Nof neighborhood of western Jerusalem and attacked worshippers with a gun, axes and knives. Four other rabbis, three of whom were dual American-Israeli citizens, were killed, as well as a young Druze-Israeli police officer, who was killed in a shoot out with the assailants. Police killed both assailants, cousins who were residents of eastern Jerusalem.

Rothman was a dual Canadian-Israel citizen and the father of 10, who immigrated to Israel 30 years ago. He never regained consciousness after the attack, during which he fought against the terrorists to prevent them from harming fellow worshippers. The UJA Federation of Greater Toronto raised more than $100,000 to assist the family, which it presented to the family in January.

Visitors to his hospital room said in recent weeks that he seemed to be aware of the people around him. His wife, Risa, spent every day at his bedside. In March, one of his sons was married.