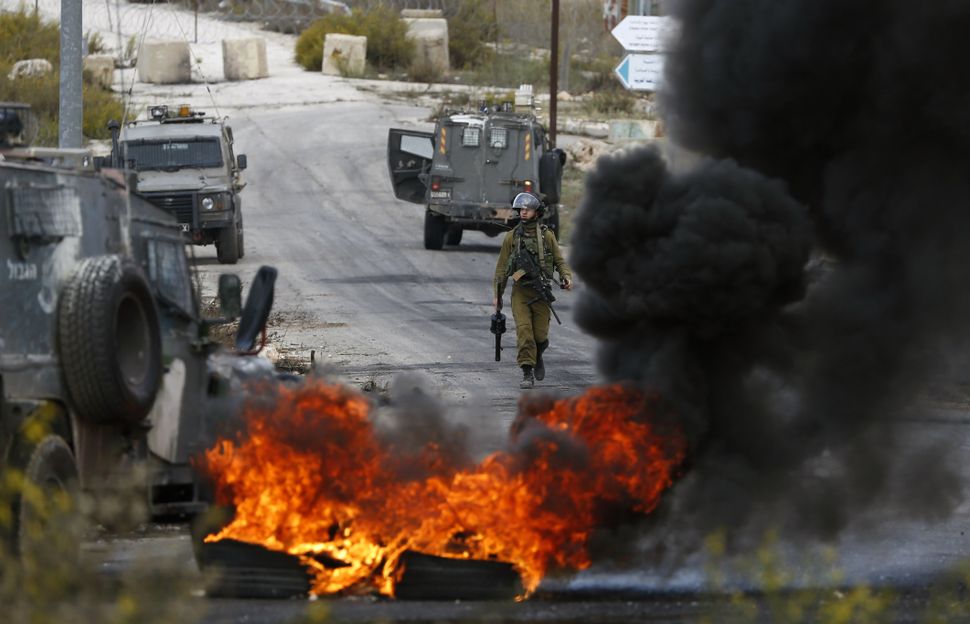 Israeli security forces shot and killed a Palestinian who ran at them with a knife in the occupied West Bank on Saturday, police said, as a month-long wave of violence showed no signs of abating.

An Israeli police spokeswoman said that at a checkpoint in the northern West Bank a Palestinian holding a knife ran toward a security officer who called on him to stop.

“When he did not heed those calls the security man shot toward him in order to neutralize him and as a result the terrorist was killed,” spokeswoman Luba Samri said. Palestinian medical officials said he was 18-years-old.

This month’s surge in violence, the worst since the 2014 Gaza war, arose in part from religious and political tensions over the al-Aqsa mosque compound in Jerusalem’s walled Old City that is sacred to both Muslims and Jews.

A growing number of visits by religious Jews to the al-Aqsa plaza – Islam’s holiest site outside Saudi Arabia and revered in Judaism as the location of two destroyed biblical temples – have stirred Palestinian allegations that Israel is violating a “status quo” under which non-Muslim prayer there is banned.

Israel says such allegations are false and that their voicing by Palestinian officials and circulation in Arab social media has been inciting the violence.

Since the latest unrest began on Oct. 1, at least 65 Palestinians have been shot dead by Israelis. Of those, 38 were assailants armed mainly with knives, Israel said, while others were shot during violent anti-Israel protests. Many were teens.

Eleven Israelis have been killed in stabbings and shootings

Many Palestinians are also frustrated by the failure of numerous rounds of peace talks to secure them an independent state in the West Bank, East Jerusalem and the Gaza Strip, territories Israel captured in the 1967 Middle East War.

On Friday the Palestinian Health Ministry said an eight-month-old baby had died in the West Bank as result of inhaling tear gas fired by the Israeli military in the area. Hospital officials told Reuters the infant had a prior health condition and that it was unclear what had caused his death.

An Israeli military spokeswoman said the army was looking into the incident.

On Saturday Israeli police said it had looked into footage which has surfaced on social media, appearing to show a paramilitary police officer shooting a wounded Palestinian lying on the ground, after he had carried out a stabbing attack in the West Bank city of Hebron on Thursday. Reuters was unable to independently verify the video.

A police statement said the Palestinian had just stabbed a soldier and that the officer seen in the footage told him not to move. When he appeared to be moving toward him, the officer concluded the man could still be a threat, possibly strapping an explosive device or carrying another weapon and shot him again.

In a separate incident, an Israeli paramilitary police officer was suspended from duty, Israeli Border Police said, after he had driven through a West Bank refugee camp and over loudspeakers said: “If you keep throwing stones at us we will shoot gas at you until you die.”