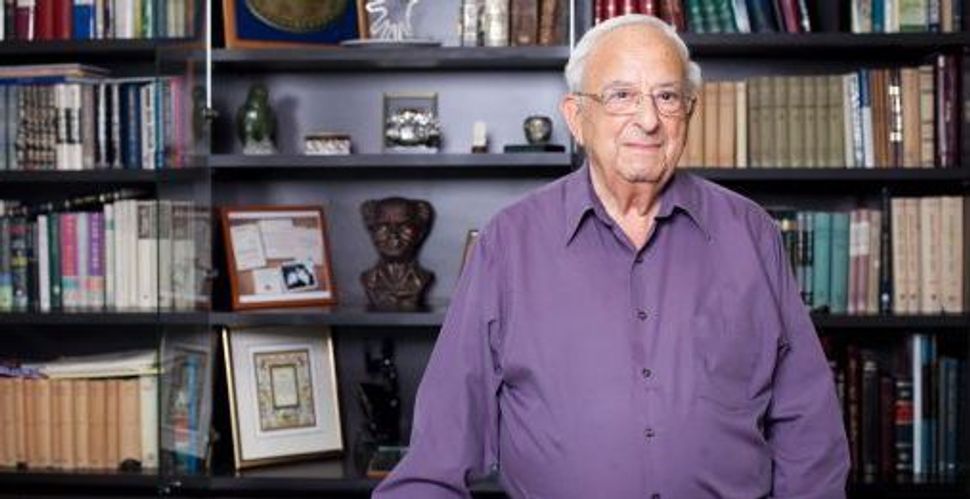 Navon was born in 1921 into a distinguished Jerusalemite Sephardi family who has lived in the city for over 300 years. His paternal family descended from Spanish Jews who settled in Turkey following the Spanish Inquisition. His mother was born in Morocco and immigrated to Israel at the end of the 19th century.

In his youth, he attended the “Doresh Tziyon” beit midrash, the “Takhemoni” school and Hebrew University Secondary School, where he studied education, Islamic culture, and Arabic language and literature. He was a teacher for several years until 1946, when he joined the Haganah’s Arab intelligence unit until the end of the War of Independence.

Navon spoke to a local Jerusalem publication in 2009 about his experiences during the war. “It was a time of suffering and near starvation. But there was a feeling that this war was life-or-death, that we would finally win and have a state here or — God forbid — it would all end.”

“We were surrounded by the Egyptians, the Jordanians and the Palestinians — they all besieged Jerusalem. But Ben-Gurion, both the prime minister and defense minister, understood the great importance of protecting Jerusalem. He said that the fall of Jerusalem would be heartbreaking and would endanger our existence,” said Navon. “There were indeed many hard battles and many sacrificed themselves, and I’m pleased that our unit was able to contribute real-time intelligence information to combat units,” he added.

In a 2001 interview with Ma’ariv, published on his 80th birthday, Navon discussed Israel’s initial years. “6,000 people were killed, crippled and wounded during the War of Independence. The economy was devastated — there was no milk, just milk powder. No eggs, but egg powder. Meat was only once a week. Today, it’s in such abundance, you go into shops and buy whatever you want.”

Yitzhak Navon’s first job in the public sector was second secretary at the Israeli legation in Uruguay and Argentina. Upon his return to Israel in 1951, he joined the Mapai political party (a precursor to the Rafi and Alignment parties) and was appointed David Ben-Gurion’s political secretary. He was appointed Ben-Gurion’s bureau chief the following year, a position he held until Ben-Gurion’s resignation in 1963.

“Israel was very honored to have someone like Ben-Gurion at the wheel during such a critical time,” Navon later said. “A person like that is born perhaps once every few thousand years. The State of Israel would not have been established without him. He was a rare individual, a unique combination of vision, realistic perspective, courage and leadership abilities.”

“It was an experience seeing how a man with such a huge responsibility, acting under such pressure, maintained a balance — it’s not easy,” he continued. “Anyone who wants to be prime minister understands the heavy burden placed on his shoulders and surely has a sense of mission. There was much to learn from him and I miss him.”

Between 1963-1965, Navon was a department head at the Education and Culture Ministry, leading a campaign against adult illiteracy. Navon recruited hundreds of soldiers and volunteers to work with adults who could not read or write in Israel’s development towns and communities in the periphery.

According to data from this period, approximately 12% of Israel’s Jewish population was illiterate. Education Minister Zalman Aran said at the beginning of Navon’s operation: “It’s a shame and disgrace that more than 200,000 adults in Israel do not know how to read or write in any language, and we must do everything possible to erase this stain from us.”

In 1965, Navon was elected to the Knesset as a member of Ben-Gurion’s Rafi party, a predecessor of the Labor Party. Navon served as deputy Knesset speaker and chaired the Knesset Committee on Foreign and Defense Affairs for seven years.

In 1970, he received a visiting delegation from Gaza at the Knesset. ”One way or another, Gaza’s residents must live in peace with Israel. Therefore, the key question is whether you want to live in peace with Israel,” Navon said to the delegation. Mayor Ragheb al-Alami, the delegation’s head answered that “intense hostility toward Israeli authorities will only improve once the rights taken from Gaza’s residents are returned to them.” Navon replied: “How can there be peaceful coexistence with Israel when you act like this… do you want to eat the grapes in the vineyard or kill the guard?”

Navon was elected Israel’s fifth president in 1978. His inauguration ceremony was televised in color, creating a stir within the Israel Broadcasting Authority, as Haaretz reported at the time. ”The IBA’s executive committee decided to soon hold a fundamental debate regarding the introduction of television broadcasts in color. At yesterday’s committee meeting, the IBA decided to recommend to the communications minister to allow President Yitzhak Navon’s ceremony to be broadcast in color. The board of directors determined that yesterday’s decision will not determine a principle or precedent regarding future color broadcasts.”

Yitzhak Navon receives an honorary award from the Spanish ambassador in Herzliya, 2003.Ariel Shalit He was a popular president who traveled throughout the country and worked for mediation between ethnic groups, religious and secular groups, Jews and Arabs and peripheral and central communities. In 1980, Navon visited Egypt as President Anwar Sadat’s official guest after the Israel-Egypt peace treaty was signed. Navon received a warm welcome after speaking Arabic during his visit.

“Sadat’s covenant with peace is an authentic covenant. Although the path we have decided to take is not without obstruction, Sadat and [Israeli Prime Minister Menachem] Begin have already come a long way,” Navon said. Haaretz columnist Yoel Marcus wrote that “Navon visited Egypt once and received what Begin failed to achieve in five visits.”

In 2009, Navon spoke to a local Jerusalem paper about his tenure as president. “I had a feeling of great responsibility, but also of great satisfaction. I knew all segments of the population. There are Jews who came from 102 countries and speak 81 languages — how do you consolidate them into one nation? This is where I saw my role.”

“On the one hand, to find what everyone holds common, whether they come from Georgia or Morocco — usually this is through history or the Bible — while allowing each individual tribe of Israel and community to express what makes them special: their heritage, their folklore, their poetry. These are two things that seem to contradict, but actually compliment each other,” he said.

Navon is the only Israeli president to return to political life following his presidential term. In 1984, he was elected as deputy prime minister and served as education and culture minister from 1984-1990. Navon stressed the teaching of Arabic studies and Mizrahi Jewish studies, and oversaw the “culture basket” program that annually showcased students’ contributions and performances. He left the Knesset and politics in 1992.

Outside of his political career, Navon was a successful author and playwright whose work was influenced by his Spanish heritage. ”Bustan Sephardi,” a work that deals with the life of a Spanish family in Jerusalem, achieved great success and critical acclaim at Tel Aviv’s Habima theater.

In 2014 the play celebrated its 2,000th performance. Navon’s involvement in Sephardic Jewish culture also manifested itself in his work as chairman of the National Authority for Ladino Culture.

In 1963, his marriage to Ofira Navon was dubbed “wedding of the year.” “The best man was David Ben-Gurion and Jerusalem’s chief rabbi, Eliyahu Pardes, officiated. Blessings were recited by the Israel Defense Forces chief rabbi, Maj. Gen. Shlomo Goren. Ophira Navon, who was a psychologist, was active in public life and starred in beauty contests. Her own fight against breast cancer set an example for many women. She died of the disease in 1993. The Navons had two children. For the past 20 years Navon’s life partner has been Miri Shafir, whom he met when he was 75 years old, two years after Ofira died.

On Navon’s 80th birthday, he was asked in the Ma’ariv interview how he summarized his life so far. “All in all I can’t complain. I had — wait a minute, why am I speaking in the past tense — I have life with a great deal of honey and a great many stings.” This year, Navon’s autobiography, entitled “Yitzhak Navon, All the Way,” was published in Hebrew by Keter.   “Yitzhak Navon’s legacy is his work for justice and peace among the nations,” said Labor Party leader Isaac Herzog.