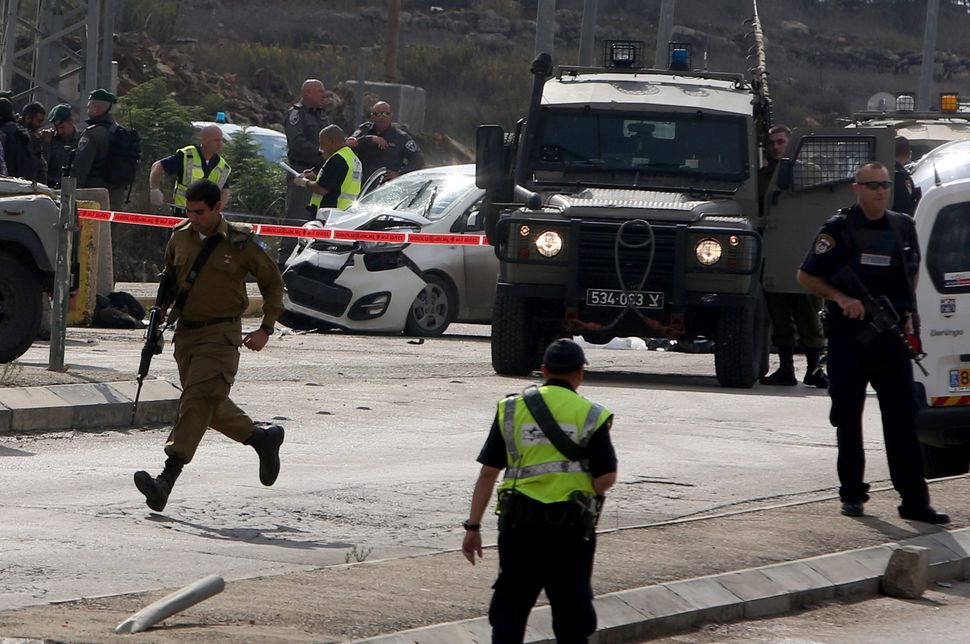 A Palestinian driver was shot dead after ramming his car into a bus stop in the occupied West Bank, injuring four people, police said on Sunday, the latest in violence that Israeli Prime Minister Benjamin Netanyahu will discuss in White House talks.

Since Oct. 1, 11 Israelis have been killed in street attacks by Palestinians motivated in part by Muslim agitation at stepped-up Jewish visits to a contested Jerusalem holy site, and by deadlocked U.S.-backed peace-making efforts.

Israeli forces have killed at least 72 Palestinians, including 43 who Israel says were carrying out or about to carry out attacks with knives, guns or cars. Many were teenagers.

Palestinians question whether all of those killed posed a lethal threat and have accused the Israelis of excessive force.

On Sunday, a Palestinian man rammed his car into a bus stop near the Jewish settlement of Tapuach in the West Bank, injuring four people, an Israeli police spokeswoman said. Paramilitary police troopers shot the man dead, she said.

At the entrance to another settlement, Beitar Illit, a Palestinian woman stabbed and lightly injured a security guard who then shot and wounded her, an Israeli military spokeswoman said.

CCTV video circulated by the Beitar Illit municipality showed a woman in Muslim dress speaking to a man wearing private security insignia on a pavement. She reaches into her bag, pulls out a large knife and lunges at him, at which point he rears back and both disappear from the frame.

Briefing his cabinet before setting off for Washington, where he will be hosted by U.S. President Barack Obama on Monday, Netanyahu alluded to Palestinian statehood negotiations stalled since mid-2014 amid feuds over the West Bank settlements and the status of Jerusalem and Islamist Hamas-controlled Gaza.

On the agenda of the White House talks, Netanyahu said, is “possible progress with the Palestinians, or at least, stabilizing the situation when it comes to them.” The Syria crisis and U.S. military aid for Israel will also be discussed, he said.

Though Israeli-Palestinian peace has eluded Obama during his two terms in office, U.S. officials said he will press Netanyahu for steps to keep alive the possibility of a two-state accord.