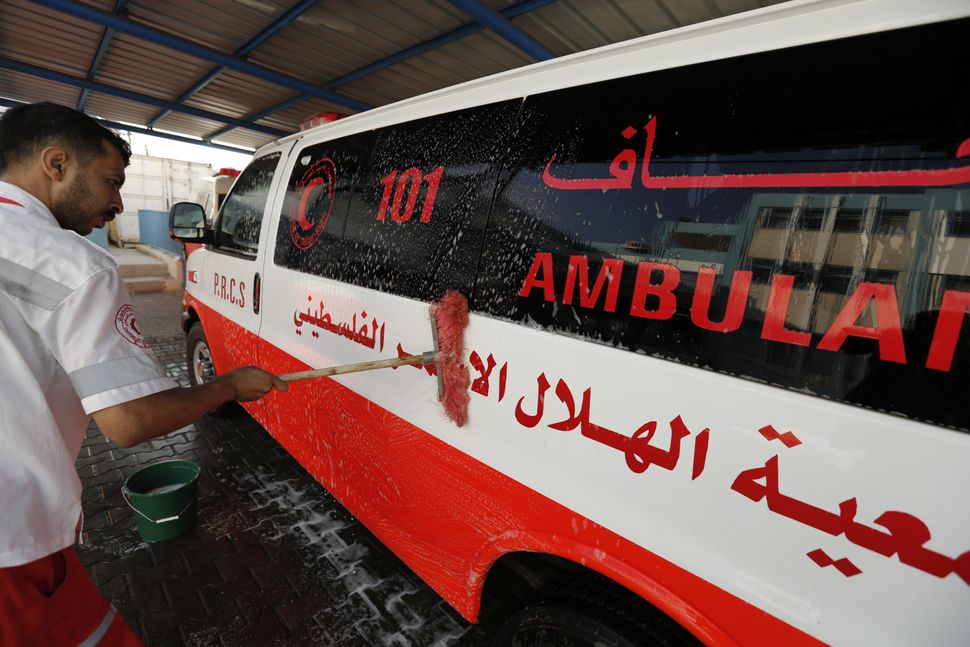 Israel’s Prime Minister has directed the country’s Foreign Ministry to file a protest with the International Committee of the Red Cross after accusing a Palestinian Red Crescent Society ambulance of not stopping to help Jewish victims of a terror attack.

“If things are indeed as they seem to me today, the State of Israel will take appropriate steps against the Red Crescent,” Benjamin Netanyahu said Saturday night in a phone conversation with Noa Litman, wife and mother of the two men slain late Friday afternoon in an attack on a car carrying seven members of the same family to the Shabbat pre-wedding celebrations of their daughter and sister.

Litman told Netanyahu during the call that the Red Crescent ambulance did not stop to assist the victims, according to a statement from the Prime Minister’s Office.

In a recording of the call made to emergency services by Litman’s 16-year-old son, broadcast Friday night on Israeli television, it appears that the Palestinian Red Crescent ambulance did not stop for the injured victims after realizing that they are Jewish.

“There are two wounded here, but we have the Red Crescent with us,” the teen says in the phone call, which was recorded. He then says: “The Red Crescent ambulance drove away from us, I don’t know why.”

In a statement issued late Friday evening by the Palestine Red Crescent Society, the organization denied allegations that its paramedics did not stop to assist the victims.

“A PRCS’ team arrived at the scene and started providing First Aid to the wounded. A few minutes later, two Israeli ambulances, one belonging to the Israeli army and another from Magen David Adom, arrived at the scene. The ambulances’ teams headed towards the wounded persons, brandishing their weapons. Given that Israeli paramedics had arrived and were providing medical care to casualties, PRCS’ team left the scene which they felt had become unsafe,” the statement said.

The driver of the Israeli ambulance that arrived at the scene told Israel Channel 10 that Red Crescent paramedics did not alight from their vehicle before driving away.