200 Gather at Paris Synagogue to Pray for Victims of Attacks 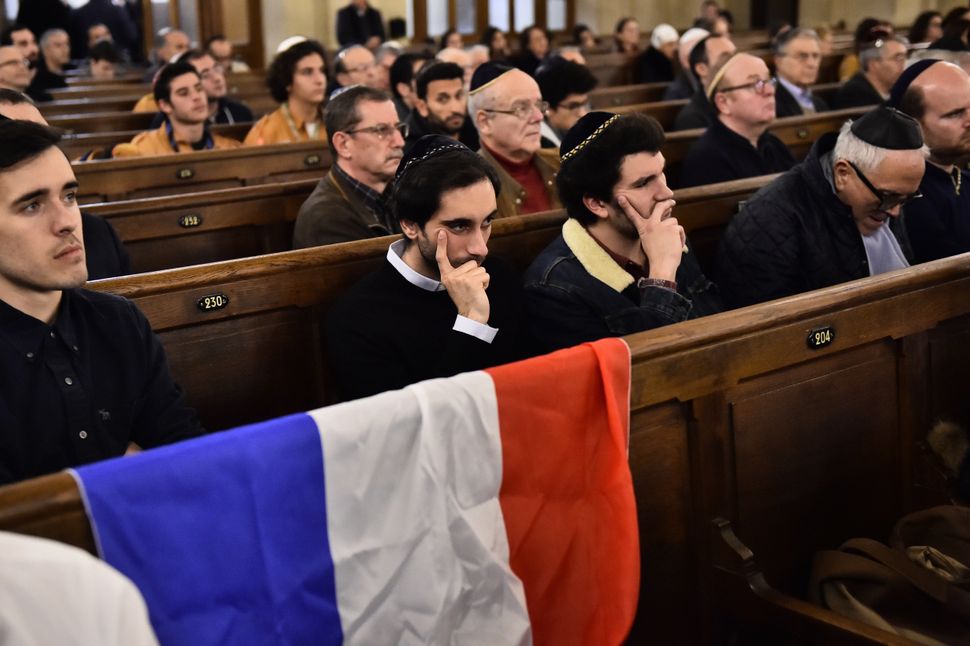 Some 200 people gathered under heavy guard at a Paris synagogue to remember the victims of the terrorist attacks in the French capital on Friday night.

Led by the chief rabbi of France, Haim Korsia, leaders of French Jewry and Israel’s ambassador to France were among those who assembled at the Synagogue de la Victoire on Sunday evening.

“Our people, which has been tested more than others, knows the healing power of solidarity and unity in the face of the pain of torn families, broken couples and orphaned children,” said Michel Gugenheim, the chief rabbi of Paris, of the 132 fatalities and more than 350 wounded in multiple attacks.

The event included a prayer for the souls of the dead and a separate prayer, led by Rabbi Moche Lewin, director of the Conference of European Rabbis, for the speedy recovery of the wounded.

Korsia said that French Jews “feel with all intensity the pain of the families touched by the tragedy and the pain of the nation in general.” He added that “the act of gathering here is perhaps more significant than the speeches.” French society, he said, “will rise up from its grief like American society rose up from the tragedy of 9/11 and like Israeli society, which never lay down for attacks.”

Streets around the synagogue were cordoned off by police and army for the duration of the ceremony, where congregants underwent pat-downs and bag inspections.

The ceremony was held as many other activities ofJewish institutions in France were suspended for security reasons and out of respect for the victims of the attacks that rocked Paris in what French President Francois Hollande said was an “act of war” by the Islamic State terror group.

“Now ordinary French people are beginning to understand how us Jews have been living in recent years, and the reality in Israel,” Samuel Sandler, the father of Jonathan Sandler, who was killed in 2012 with two of his sons and another child during an Islamist attack at a Jewish school in Toulouse, told JTA at the gathering.

On hand for the ceremony were the president of the CRIF umbrella group, Roger Cukierman, and Sacha Reingewirtz, head of the Union of Jewish Students of France, as well as the ambassador, Aliza Bin-Nun.

200 Gather at Paris Synagogue to Pray for Victims of Attacks