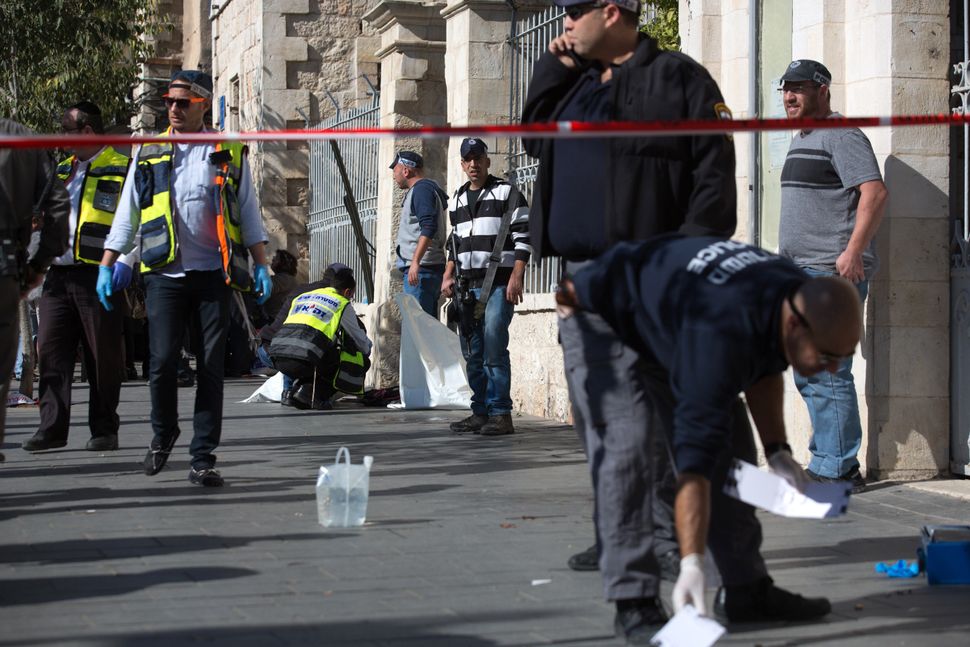 A Palestinian stabbed and killed an Israeli at a petrol station in the Israeli-occupied West Bank on Monday and in Jerusalem two Palestinian girls attacked and wounded an elderly man with scissors before a policeman shot them both, killing one.

In a day of rapidly unfolding violence, the latest in an eight-week surge of stabbings, shootings and car rammings, a Palestinian was also shot dead near the West Bank city of Nablus after approaching soldiers with a knife, the military said.

The attack in Jerusalem occurred on Jaffa Road, a busy downtown street near the market. Two Palestinian girls, one aged 14 and the other 16, used scissors to stab and slightly wound a 70-year-old man, who turned out to be Palestinian, not Israeli.

Video on YNet, a popular Israeli news website, seemed certain to raise questions over whether a passing policeman used excessive force to subdue the teenagers after the attack.

At the petrol station in the West Bank, on the side of a road regularly used by Israelis to drive between Jerusalem and Tel Aviv, a Palestinian stabbed two Israelis, killing one of them, before he was shot dead by soldiers.

Gunfire from the troops hit a passing car, slightly injuring its Israeli driver.

The incidents occurred a day before U.S. Secretary of State John Kerry was due to visit Israel and the Palestinian territories to discuss ways to try to stem the violence.

Eighty-six Palestinians have been killed in the spate of violence since Oct. 1, some while carrying out attacks and others in clashes with Israeli forces. Twenty Israelis and an American student have been killed by Palestinians, either in stabbings, shootings or purposefully run down by vehicles.

It is the worst violence to strike the region since the Gaza war last year, fueling talk of a new Palestinian uprising, or Intifada, against Israel’s occupation. The first intifada lasted from 1987-1993 and the second from 2000-2005, although both were far more intense and deadly than the current violence.

Closed circuit television footage on YNet of the Jerusalem stabbing showed the two young Palestinian women, their right arms raised and making stabbing gestures, advancing on the sidewalk toward a man who then appeared to draw a handgun.

Another man, identified by police as a bomb disposal officer, ran towards the scene from a police van, his weapon drawn. He fired at the 14-year-old girl, who fell to the ground just as another man hit her with a chair.

The officer then discharged his gun several times at the older girl, who crumpled against a wall. He ran back towards the first teen, who was lying motionless on the ground, and fired at her again.

A ricochet from one of the bullets he fired injured a passerby – an Israeli man, hospital officials said.

Last month, a U.S. State Department spokesman said that while Israel had a right and responsibility to protect its citizens, he cited reports “of what many would consider excessive use of force.” Israel bristled at those remarks, saying shooting attackers was self-defense.

The bloodshed has been driven in part by Muslim agitation over stepped-up Jewish visits to East Jerusalem’s al Aqsa mosque compound – Islam’s third holiest site and also revered by Jews as the location of two destroyed biblical temples – as well as by long-deadlocked Israeli-Palestinian peace talks.

On Sunday, an Israeli woman was stabbed to death and three Palestinian attackers were killed in a series of incidents in the West Bank.

The Palestinian government has said Israel is carrying out unlawful killings of Palestinians and “accusing every victim of holding a knife” or planting one at the side of alleged attackers. Israel has said it is within its rights to respond with lethal force to potentially deadly attacks.