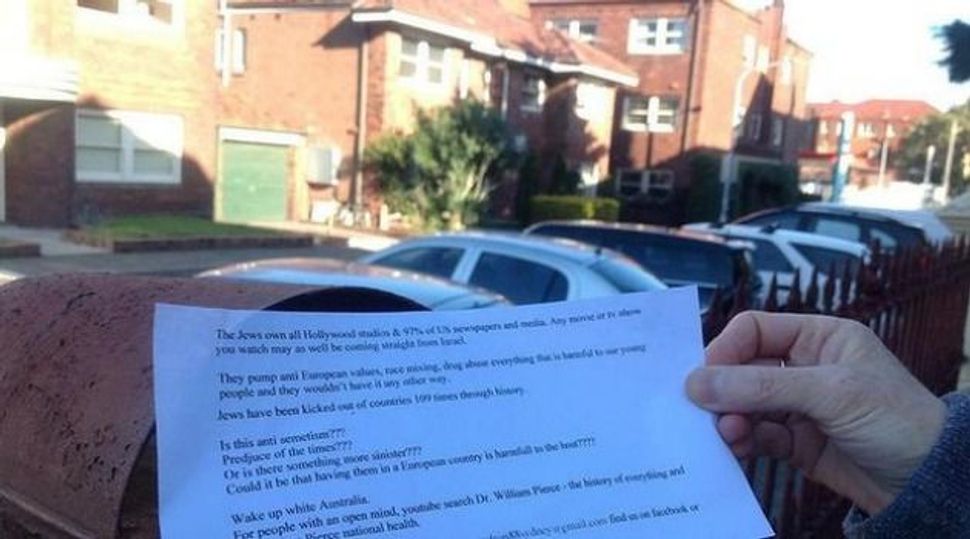 The number of anti-Semitic incidents within Australia has decreased by 39 percent in the last year according to the latest figures released by The Executive Council of Australian Jewry.

The organization attributed this to a spike in incidents in the previous year caused by the war between Israel and Hamas in Gaza.

In total, there were 190 recorded incidents with the vast majority arising from abuse, harassment or intimidation, an increase of 58 percent over last year.

New South Wales was the worst affected state with 115 reports and with the state of Victoria experiencing 66 incidents.

The report, compiled by The Executive Council of Australian Jewry’s Julie Nathan, covers the period from October 1, 2014 to September 30, 2015.

Most incidents occurred in areas close to synagogues.

Among the incidents singled out for special mention was the Lynch Affair, in which a professor at Sydney University, Jake Lynch, waved a banknote in the face of an elderly Jewish woman during an anti-Israel protest and verbally abused her. Lynch was later to admit that it was reasonable for the Jewish community to have taken offence at his banknote waving gesture.

Another incident involved Ismail Al-Wahwah, the spokesman for the Islamist organization Hizb ut-Tahrir, who vilified Jews in a public speech and featured on a YouTube video calling for the slaughter of Jews. The law as it stands precluded any action but the New South Wales government is seeking to reform it next year.

The Red Rattler Theatre refused to hire out its facilities to a Jewish group in another incident highlighted in the report. Anti-Israel sentiment had manifested itself in anti-Jewish attitudes. The incident was well publicized and, following a public outcry, the theater reversed its decision.

The president of The Executive Council of Australian Jewry Robert Goot told JTA: “These results show how appreciative we should be of living in a country like Australia…but we should never become complacent.”