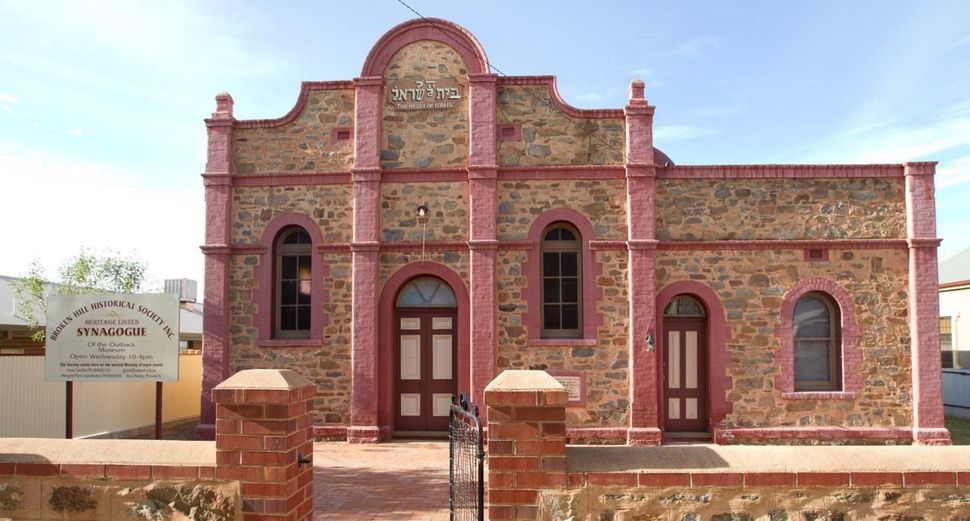 Image by Synagogue of the Outback Museum

A historic synagogue in the Australian outback mining city of Broken Hill was defaced with Nazi and Islamic symbols.

The curator of the synagogue arrived at work Monday to prepare for a visit by tourists and found the front of the building had been vandalized.

Margaret Price, the coordinator of the Synagogue of the Outback Museum told JTA: “I arrived at work and found the symbols and slogans across the front of the building which is under the ownership of the Broken Hill Historical Society.”

Price said the synagogue last was vandalized about 10 years ago, when it was painted with swastikas on Hitler’s birthday. In 2010, a local bookstore that featured promotional Chanukah material in its window was defaced with Nazi symbols as well.

“Although there is no Jewish presence in the city these days, I grew up with Jews and my family worked with them. They were Broken Hillers and a strong part of our community. We are dismayed by this scurrilous attack on the building on the very day of its 105th anniversary,” Price told JTA.

She added: “People are asking why this is happening now and one man offered me $50 to help clean it up.”

The Broken Hill Synagogue was established in 1910 to meet the spiritual needs of a small but vibrant Jewish community serving the booming mining town. When the mining boom slowed down, most of the Jewish community left. Broken Hill is situated in far west New South Wales, hundreds of miles from other Jewish communities in Adelaide, Sydney and Melbourne. It is the first city in Australia to be heritage listed. “The presence of the synagogue played a part in the listing,” Price said. It last functioned as a synagogue in 1962.

Detective-Inspector Michael Stoltenberg of Broken Hill police told JTA that police are investigating the attack on the synagogue. “These sorts of incidents are not common in our area and we want it to stay that way,” he said.

The CEO of The New South Wales Jewish Board of Deputies, Vic Alhadeff, said he visited the Broken Hill Synagogue two years ago while on the Board’s annual bridge-building tour of Regional New South Wales. “The bigotry inherent in any such attack is exacerbated by the idiocy of the perpetrators. The Broken Hill Synagogue, which is 105 years old, is cared for by the same dedicated group of volunteers who take care of a mosque and two museums in the city, so attacking it impacts those other institutions too as funds will now have to be raised to remove the graffiti,” he said.

“All acts of racism are strongly condemned, and how much more so in a city which was built on its multicultural ethos, with Jews having a long and proud history in Broken Hill until recently,” he added.

The synagogue, which houses prayer books, ark curtains, tallitot and an Israeli flag, is visited by over 800 tourists annually.